In a meeting of the two teams that faced off in the 2019 NBA Finals, the Toronto Raptors host the Golden State Warriors on Friday, April 2. This NBA betting matchup will take place at Amalie Arena in Tampa Bay, Florida and tips at 7:00 p.m. ET.

This line jumped the fence on the news that star guard Stephen Curry (tailbone) is out tonight for Golden State. The Warriors opened -4.5 Thursday afternoon at PointsBet USA, dipped to -3.5 overnight, and the number jumped straight from there to Raptors -2.5 early this morning. From there, it continued to rise and is at Toronto -4.5 as of 3:30 p.m. ET. Still, it's two-way action with a lean toward the Warriors, who are taking 59 percent of tickets and 55 percent of money on the spread. The total is all the way down to 219.5 from a 228.5 opener, with 62 percent of bets on the Under and 67 percent of money on the Over.

The Raptors are 0-4 ATS in their last four games.  Find more NBA betting trends for Warriors vs. Raptors.

(Editor's Note: These picks were made before Friday afternoon's news that Steph Curry would be out with a tailbone injury.)

The Raptors haven’t had a true home-court advantage all season, and that’s definitely part of the reason they have struggled this year. While most arenas aren’t fully packed, players are at least more comfortable in the cities they call home. The Raptors haven’t had that feeling at all, and things might get even worse tonight. With Steph Curry in town, it’s entirely possible that the entire crowd ends up turning on Toronto in this one. The fans in attendance mostly have no allegiance to the Raptors, and Curry is one of the most popular players in the league. If he gets hot, those fans are going to get behind Golden State. And with Kyle Lowry out, the Raptors are down one of their best perimeter defenders.

This game also happens to represent a pretty good opportunity for rookie James Wiseman to turn in a solid performance. Wiseman has had an up-and-down season with Golden State, but Toronto doesn’t have much depth at the center position. That means that Wiseman should have some success throwing his body around and using his combination of size and athleticism to control the paint. He just has to avoid getting into foul trouble.

With neither of these teams doing a good job defensively, look for both of them to put up some big numbers on the other end. Both of these squads have some talented shot-makers, so this should be pretty high scoring.

The Raptors don’t have a lot of size inside, so Wiseman really should be able to make an impact on this game. Toronto starts games with Aron Baynes, who is more of a bruiser inside. He’s a huge body, but Wiseman is more athletic and should give him some trouble.

And the Raptors then turn to Chris Boucher off the bench, and Boucher is as thin as any big man in the league. Wiseman should be able to throw him around, which is why this seems like a game that the rookie should thrive in. 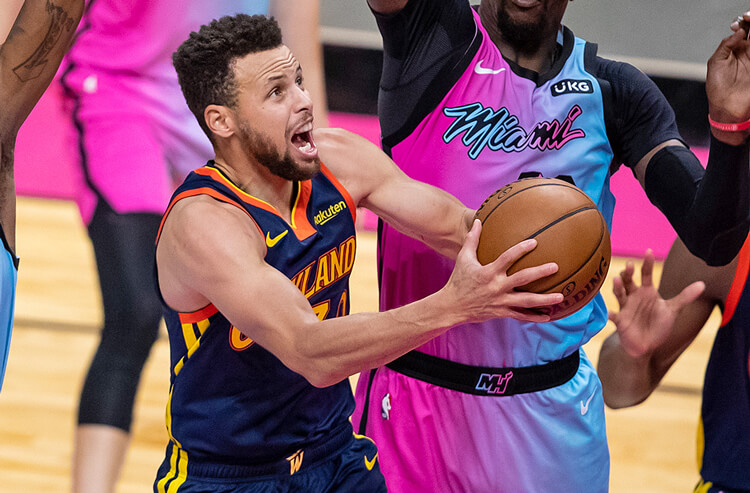 Warriors vs Raptors Picks: Chef Curry Gets Cooking
Provided by