CJ McCollum and the Blazers will look to put more distance between themselves and the play-in round as they take on the short-handed Jazz tonight.

There will be a lot on the line when the Portland Trail Blazers and Utah Jazz meet at Vivint Smart Home Arena in Salt Lake City, Utah on Wednesday, May 12. This game will tip at 9:30 p.m. ET, when the Blazers will look to continue fighting for the fifth or sixth seed in the Western Conference. Meanwhile, the Jazz are trying to lock up the top spot.

Will Utah earn yet another shorthanded victory here? Find out in our Blazers vs. Jazz picks and predictions.

The Blazers are 5-1 ATS in their last six road games. Find more NBA betting trends for Trail Blazers vs. Jazz.

The Blazers are scorching hot coming into this game, as they have won eight of their last nine. Now, Portland can use yet another victory in this meeting with Utah, as the Blazers are still trying to avoid the play-in tournament. A win here would go a long way in preventing them from having to play for their spot in the playoffs. The Jazz could certainly use a victory as well, as they haven’t yet clinched the top seed in the Western Conference playoffs. However, the Blazers will be the more desperate team in this game, and it does seem like Utah is safe at the moment.

Not only will Portland be the hungrier team in this game, but the Blazers have to like what they see when looking at who will be available. Sure, Rudy Gobert will still be out there for the Jazz, but Jusuf Nurkic should still be able to have a solid game in this one. Meanwhile, supporting Gobert will be Joe Ingles, Bojan Bogdanovic and Jordan Clarkson, with Mike Conley and Donovan Mitchell unavailable here. With Utah’s backcourt dealing with an injury, it’s hard to imagine the team defeating a group that includes Damian Lillard and CJ McCollum.

Portland’s backcourt is too much for most teams on a good night, but that should be especially true against a team as banged up as Utah. Look for the Blazers to take this one outright.

The last four games the Jazz have played have gone Over the total, and the Blazers definitely have more firepower than the average team. However, these two went Under when they met in Utah on April 8, and the Jazz are going to have to slow things down if they want to have a chance here.

Utah can obviously score, but beating a Portland team with Lillard and McCollum isn’t going to come by simply outscoring them. The Blazers are first in the league in offensive rating over the last 10 games, so the Jazz have to be wise and try to slow things down.

McCollum is averaging 23.0 points per game this season, but he has scored 55 over the last two games. The crafty guard is 10 for 19 from the outside over the last two, and he appears to really be in a groove right now. The Jazz really don’t have much of an answer for a guy like McCollum, so he should be able to get it going again here.

Utah might try to throw Royce O’Neale on him, and O’Neale is an excellent perimeter defender. However, McCollum is a little too quick for him, his ability to score at all three levels makes him a tough cover. 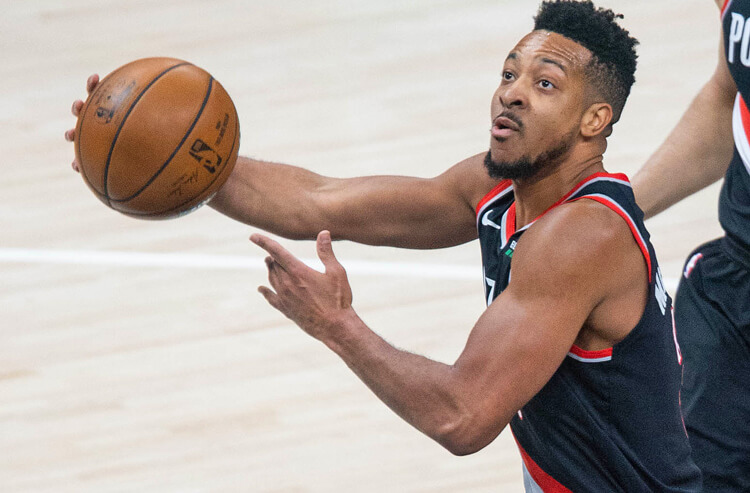 Trail Blazers vs Jazz Picks and Predictions: Hunger for More
Provided by