Toronto's had a frustrating stretch of losses, but Washington offers a good slump-breaking spot with the Wizards frustrating in their own right lately. Find out if the North can take advantage with our Raptors vs. Wizards picks.

It’s been a tough stretch for the Toronto Raptors, having dropped four of their last five games, but the majority of those losses have been extremely close.

Toronto will try to get back on track when it visits Bradley Beal and the Washington Wizards on Friday night. Can Toronto snap out of its current funk, play a complete game and win outright as short road underdogs in this intriguing Eastern Conference matchup?

Find out in our free NBA picks and predictions for Raptors vs. Wizards on January 21.

The Raptors opened this Eastern Conference matchup as 1 to 1.5-point point underdogs and that’s where the line sits as of Friday afternoon. The total hit the board at 217.5 and has been bet up to 219.

The Under is 6-0 in the Raptors’ last six games overall. Find more NBA betting trends for Raptors vs. Wizards.

Raptors vs Wizards picks and predictions

The Raptors are going through an interesting stretch. They have lost four of their last five games overall, but none of the losses, outside of the one the Pistons (thank you very much Dwane Casey), have been bad. They’ve lost by five points or fewer to the Suns, Heat, and Mavericks with a victory over the Bucks sandwiched in the middle.

Despite the losses, the Raptors have played well. Leaders Fred VanVleet and Pascal Siakam are both playing at an All-Star level, and the defense has been a Top-10 unit over their last 11 games. The Raps' biggest problem is their depth. After their starters, there just aren’t many guys Nick Nurse trusts on his bench.

But maybe a date with the Wizards is just what the Raptors need.

The Wizards have been an ice-cold bet of late going, 1-7 ATS in their last eight games and just 3-5 SU despite being favored six times over that span. Washington’s offense has been decent in those contests but it’s the defense that has really taken a step back, falling to 20th over that eight-game stretch.

This will be the fourth meeting already between these teams this season, the Wizards took the opener in dominating fashion, but the Raptors have responded by winning the last two. But overall, the Toronto defense matches up well with Washington and has limited it to an average of 96 points in those three meetings.

With the Wizards cooling off, this should be another close contest for the Raptors, so that means we're taking the points.

When it comes to the total, the early money has come in on the Over and I’m not really sure why. For starters, all three of these matchups have gone Under the total this season and the last two had numbers in the 212 range.

Secondly, the Raptors defense has played very well despite the rough patch. They're allowing just 101.4 points per game over this five-game stretch, and while the Wizards offense is playing well right now, as noted, they don’t match up well against the Raptors.

Meanwhile, Toronto’s offense has also slowed down a bit during this weird stretch of games, scoring just 96.4 points per game over their its five contests.

On top of all that, the Raptors and Wizards both rank in the bottom third of the NBA when it comes to pace. This means that this number is just too high for this matchup.

The Raptors just feel due for a win here. They have had some hard luck lately at the end of games and as long as they keep the same defensive intensity going in this game against the Wizards, they’ll have a chance to win. Washington is leaking oil on defense and the offense is streaky, and as noted, doesn’t match up well against Toronto. Bet on the Raps to get back on track.

Did you know that if you parlayed today’s NBA Raptors vs. Wizards predictions and picks in a single-game parlay, you could win $64.71 on a $10 bet? 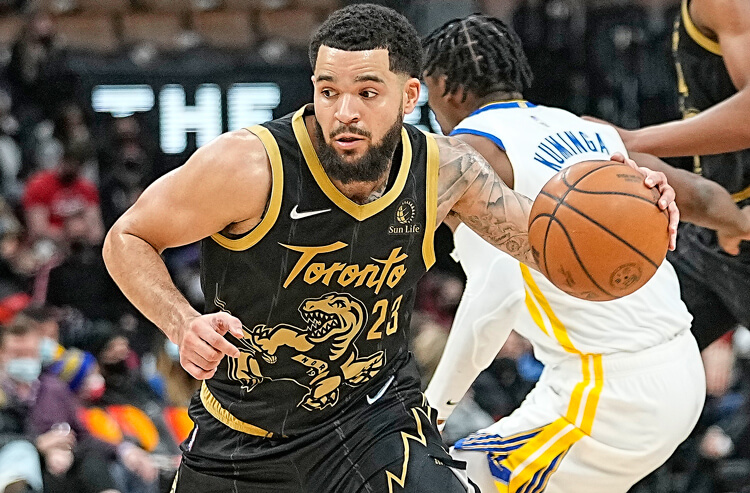 Mavericks vs Warriors Game 1 Player Props: Looney Fades Back Into the Background
Shawn Wronka | May 18, 2022

Celtics vs Heat Game 1 Picks and Predictions: Miami Flames Boston in Grueling Game 1
Jason Logan | May 17, 2022
About Us
Contact Us
Careers
Our Team
Brand
Testimonials