LAC has been a scrappy bunch without their two franchise guys, but Philly is a tough place to play and Joel Embiid is absolutely torching right now. See why we think the home side wins comfortably with our Clippers vs. 76ers picks.

The Philadelphia 76ers have been rolling since the end of December and they now host a Los Angeles Clippers team that has lost three of its last four. The Clippers continue to be without Paul George and Kawhi Leonard for the foreseeable future, and that makes this a game that the Sixers can’t afford to lose.

Will Los Angeles put a scare into Philadelphia on Friday? Keep reading our Clippers vs. 76ers NBA picks and predictions for January 21 to find out.

The Sixers are laying 8.5 points at nearly every sportsbook after opening this game as 8-point favorites over the Clippers. The total, meanwhile, is down from 214 at open to as low as 212.5 on quite a few books.

The Sixers are 8-2 against the spread in their last 10 games.  Find more NBA betting trends for Clippers vs. 76ers.

Clippers vs 76ers picks and predictions

The Clippers might be missing two of the best two-way players in the league, but they have remained competitive this season. They are, however, going to be in for a rude awakening when they face the Sixers tonight. This Philadelphia team is one of the few groups in the league that has players that play the game as hard as Los Angeles’ does. The Sixers go out and give it everything each night, but they are also more talented than this version of the Clippers. And on top of that, they have one of the best home-court advantages in basketball.

Ivica Zubac is an extremely underrated center and is coming off a very good performance against Nikola Jokic last game. This, however, is going to be a much tougher matchup for him. Joel Embiid is a much better defensive player than Jokic is, so he should do a better job of containing Zubac around the basket. Then, on the other end of the floor, Embiid is fully capable of cooking Zu. Embiid has everything going right now, whether it’s creating shots for himself in the post, off the dribble or just finding his teammates for easy buckets.

The Sixers also have guys like Tyrese Maxey and Tobias Harris, who would arguably be the best players on this current Clippers team. Maxey’s defense will be huge in this game, as he could do well on a guy like Reggie Jackson here. Meanwhile, Harris has not played well this season, but he could find a spark in a meeting with his former team.

The Clippers play mostly very low-scoring games but that has changed recently. Los Angeles comes into this one after having gone Over in each of its last two contests, and the games weren’t even close to the total. The Clippers combined to score 272 with the Indiana Pacers on January 17, and they followed that game up by combining to score 258 in a loss to the Denver Nuggets last game (albeit in OT). With that in mind, this team is clearly capable of playing games that go Over and that’s how this one should go here.

Philadelphia is also coming off an Over in a game against the Orlando Magic, and the Over is actually 29-16 when the Sixers are playing at home against teams with losing records over the last three seasons. With that in mind, you’ll want to be on the Over in this one. If Embiid gets hot again, like when he had 50 last game, you won’t want to be rooting for fewer points to be scored.

The Sixers are the better team in tonight’s matchup and they also have home-court advantage against a team that hasn’t played well on the road thus far. The Clippers are 7-12 straight-up and 9-10 against the spread when playing away from home this season, and this will be as tough an environment as they’ll see all year. The Sixers are also 5-1 against the spread in their last six home games against teams with road winning percentages of 40% or less.

Philadelphia is also 5-1 against the spread when facing teams with losing straight-up records this year. The Sixers desperately need to figure out the Simmons situation in order to take another step forward as a team, but they’re plenty capable of beating up on teams they’re supposed to without him.

Did you know that if you parlayed today’s NBA Clippers vs. 76ers predictions and picks in a single-game parlay, you could win $26.45 on a $10 bet? 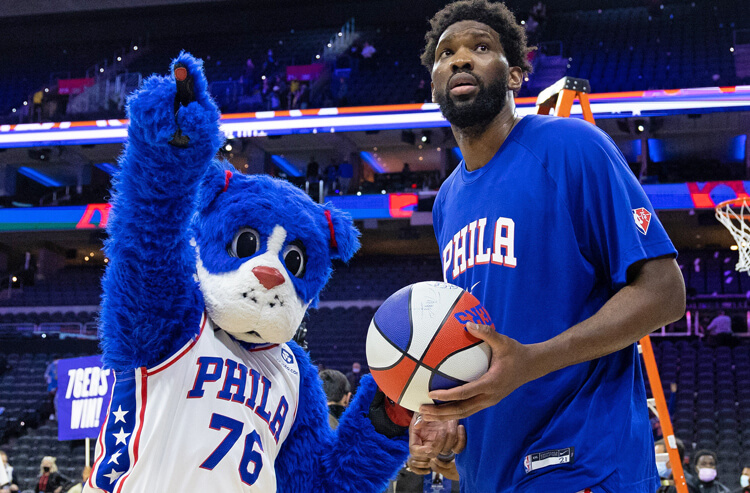 Clippers vs 76ers Picks and Predictions: Sixers Win Comfortably at Home
Provided by