Bulls vs Bucks Picks and Predictions: The Champs Serve Chicago a Reminder

Not long ago, this game shaped up as a potential Eastern Conference finals preview. Now shorthanded, the Bulls will have a hard time running with the Bucks and our NBA betting picks expect a statement from Milwaukee.

The Bucks may still be two games behind the Bulls for pole position in the Eastern Conference, but a double-digit spread tonight makes it clear who the frontrunner in the East truly is, and it’s the defending champions rounding into form.

If the Bulls do not pull off a Friday night upset, their lead in the East could be gone by the end of the weekend.

Here are our free NBA picks and predictions for the Bulls at the Bucks on January 21, with tip set for 8:00 ET.

This line has only widened since opening with the Bucks favored by 8.5 points on Thursday afternoon. It jumped to -9.5 by the end of the night and reached -10.5 mid-morning Friday. The total stayed rather steady by comparison, opening at 227.0 and settling at 227.5 after a brief spell at 228.0.

USA: Running of the Bulls: DeMar DeRozan and Nikola Vucevic to record 50+ combined points tonight BOOSTED to +170 (was +150) at DraftKings! Claim Now

The Over is 4-0-1 in Chicago’s last five games and 3-0-1 in its last four games as an underdog. Find more NBA betting trends for Bulls vs. Bucks.

Bulls vs Bucks picks and predictions

This is, quite simply, unfortunate timing for the Bulls. They could have burgeoned some season-long momentum with a win in Milwaukee tonight, staked their in-house beliefs to an on-court result. Instead, they are without two of their three best players as they face Milwaukee, just as it gets its big three back together.

And the Bucks’ big three has been a force this season.

After Jrue Holiday’s return on Wednesday against the Grizzlies, Milwaukee is 17-3 this season when all of Holiday, Khris Middleton, and Giannis Antetokounmpo play. One of those losses came when the Bucks were favored by even more than tonight, falling by nine against Detroit as 17-point favorites on Jan. 3, but otherwise, Milwaukee’s two stumbles with its core intact have come on the road against strong opponents.

In other words, the Bucks have looked like the defending champions.

And the Bulls no longer look like contenders. Losing both Lonzo Ball and Zach LaVine within a week has knocked Chicago off its pace in nearly every way. The Bulls had lost four straight before they upset the Cavaliers on Wednesday, going 4-6 ATS in their last 10 and 2-3 in their last five.

Without Ball and LaVine, the latter of whom is not exactly known as a defensive stopper, Chicago’s defense has collapsed, not that it was stellar to start with. And with all due respect to Coby White, the Bulls cannot keep up in shootouts without Ball and LaVine, even if the third-year point guard is averaging 17.8 points per game since LaVine’s injury.

White will not be up to the task of slowing Holiday or Middleton defensively, and he won’t be able to match them shot-for-shot on the other end, an embodiment of all of Chicago’s current worries.

When healthy, Milwaukee has never had trouble scoring. Its 126 points on Wednesday emphasized that. Even when not totally healthy, the Bucks have hardly struggled. Though that big three has been together for only 20 of 47 games this year, the Bucks are No. 7 in offensive rating in the league.

This has been Chicago’s greatest worry since Ball and LaVine went down, as counter-intuitive as that thought is. They may not be excellent defenders, but simply enough, they are better than their replacements, and that dropoff only continues as the end of the Bulls’ bench is now called on for more work in the second unit since the usual subs are now starters.

Going against a deep roster in Milwaukee, one that is healthier than nearly any other roster in the league, those back-end Bulls should be exposed plenty tonight.

Rodney Hood and Pat Connaughton are NBA-quality players, as are George Hill and Grayson Allen, not to mention Wesley Matthews and Donte DiVincenzo. That’s the usual assortment of the Bucks’ subs, the players that could turn a lead into a blowout when they face Troy Brown Jr., Tony Bradley, and Matt Thomas, who combined for 61 minutes for Chicago on Wednesday.

Blowouts lead to inconsistent defense and inflated scores. Expecting one because of the bench may not be a usual thought process, but the bench is where a shorthanded roster can be most exposed against a healthy one.

Milwaukee will have the three best players on the court, and perhaps as many as seven or eight of the best 10. That may sound harsh, but it is the reality incurred by the timing of this game. The Bulls are without two of their best four, and the Bucks finally have their best three together.

This could have been an Eastern Conference Finals preview. Instead, it should be a ho-hum Friday night as Milwaukee reminds the NBA why it should be the favorite to reach the Finals out of the suddenly stronger East, at least when healthy.

Did you know that if you parlayed today’s NBA Bulls vs. Bucks predictions and picks in a single-game parlay, you could win $26.45 on a $10 bet? 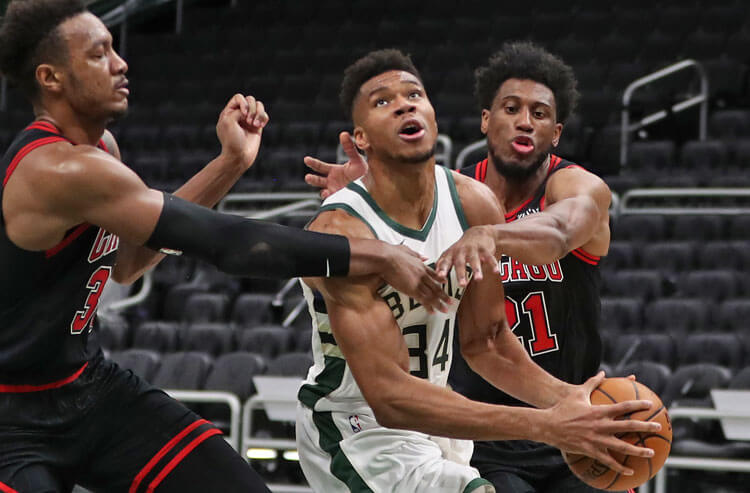 Bulls vs Bucks Picks and Predictions: The Champs Serve Chicago a Reminder
Provided by