Utah gets its first real test this season when Denver visits Tuesday night. And while the hosts won't take them lightly, the books might not be showing enough respect to the underdogs — or the MVP. Find out why with our Nuggets vs. Jazz picks.

The Utah Jazz and Denver Nuggets have faced fairly cupcake schedules to begin the 2021-22 NBA season, with just one projected playoff opponent between them thus far.

But when these two hopeful West contenders clash on Tuesday, they'll get a better litmus test of their early-season chops, as Denver hopes to bide time 'til Jamal Murray's return and Utah looks to build on last season's playoff disappointment.

Get the lowdown for Tuesday's NBA betting with our Nuggets vs. Jazz picks for October 26.

Over is 8-2 in Utah's last 10 games as a home favorite. Find more NBA betting trends for Nuggets vs. Jazz.

Nuggets vs Jazz picks and predictions

Utah is still undefeated on the season, but any other result after playing the Kings and Thunder would be a serious cause for concern. Denver will represent its first real challenge this season — a seasoned playoff squad led by reigning MVP Nikola Jokic.

Jokic has more or less picked up where he left off, shaking what before last season had been habitually slow starts for the Serb. While his assists are down over a small sample, he's averaging 27.7 ppg and 16 rpg on an absurdly efficient .679 eFG% and will keep Jazz defensive stalwart Rudy Gobert on his toes all game.

Obviously, Denver will suffer from the continued absence of star guard Jamal Murray (out since last season with a torn ACL), but has reasonable stopgaps at point guard in Monte Morris and Facundo Campazzo, strong supplementary scoring from Michael Porter Jr., and the presence of Will Barton, a well-rounded veteran swingman who missed chunks of last season. The Nugs are still threats, as evidenced by comfortably beating the reigning West champs (Phoenix) 110-98 on opening night.

As such, it's easy to lean on last season's results, where Utah was the league's third-best ATS team at 47-35-1. Granted, that record was largely buoyed by a historic midseason run where the Jazz went 18-2 ATS, which the books sharply corrected for down the regular-season stretch. And it kind of feels like it's still happening.

Seven points just seem like too many to be spotting a team like Denver, who matches up fairly well and can test Utah at several positions. The Jazz may be the deeper team, but Jokic will be the best player on the floor and is an ultimate ceiling-raiser for his supporting cast.

We fully expect Utah to be ready for this game, even after its soft liftoff to the schedule, but spotting Denver this many points isn't giving it much respect.

Not entirely sure what's going on with this total here — 218.5 seems way too low.

I mean, in the vacuum of this season, these two sides are averaging a hair over 208 ppg. But this total seems to be putting far too much stock in a minuscule sample size wrought by early-season variance.

For starters, both Utah and Denver were Top-10 scoring teams last season, clocking a combined 231.5 ppg. They also tended to run the score up on each other, averaging over 235 points in three meetings.

Denver plays at a deliberate pace, but it's also one of the most efficient offensive teams in the league, and can cause serious problems for Utah's scheme when Jokic drags Gobert out the perimeter. With Joker and Porter Jr., Denver's equipped for a shootout with pretty much any team, and even something resembling an average scoring output from these two squads would topple this total.

Jokic has taken a step back in the playmaking department so far, but his assists prop tonight (6.5) seems fairly married to that small sample.

Despite averaging just four assists over three games, Jokic is the best passing big man ever, averaging 8.3 assists per game last season, and topping 7 apg in each of the prior two campaigns. In the three Utah matchups last year, Joker notched up to 9.0 apg.

The MVP's assists are bound to tick up, and while we can get this Over at plus money, it's a must-hammer.

Did you know that if you parlayed today’s NBA Nuggets vs. Jazz predictions and picks in a single-game parlay, you could win $72.00 on a $10 bet? 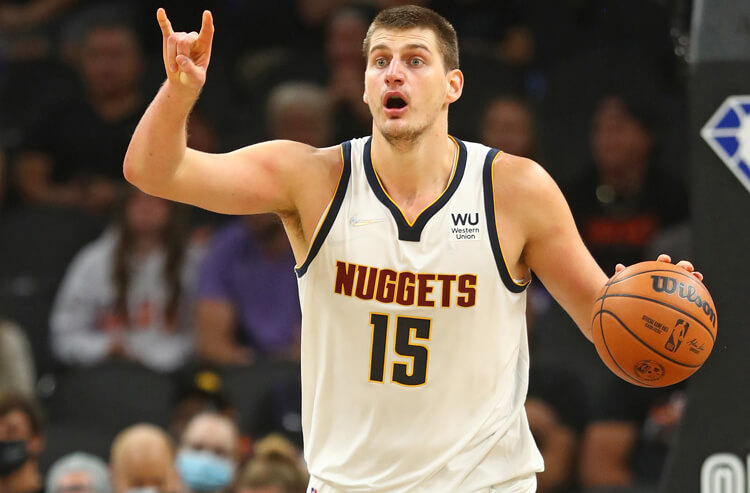