The Knicks are coming off a lackluster effort against Orlando, but take a step up in competition in facing the 76ers. However, with Philly's superstar battling a sore knee, is the NBA betting value residing with the home team tonight?

A pair of Eastern Conference title hopefuls, albeit with serious question marks, do battle tonight when the New York Knicks host the Philadelphia 76ers.

New York, looking to prove that last season wasn't a fluke, is off to a 2-1 start but is trying to rebound from an ugly loss on Sunday. The Knicks are slight NBA betting home favorites against the also-2-1 Sixers, who are still lugging around the Ben Simmons baggage and are already dealing with some key injuries.

Here are our best free NBA picks and predictions for 76ers vs. Knicks on Tuesday, October 26.

This line opened at Knicks -1, but early action on the home side has pushed them to -1.5. The total opened at 218 and dropped to 217 at the time of writing. Use the live odds widget above to track any future line movements right until tip-off and be sure to check out the full NBA odds before betting to ensure you get the best number.

The Under is 5-1 in the last six meetings. Find more NBA betting trends for 76ers vs. Knicks.

76ers vs Knicks picks and predictions

In a nutshell, the big men will have a massive impact on this game. Mainly, the fact that both of Philadelphia's centers — MVP candidate Joel Embiid and glass-cleaner Andre Drummond — are game-time decisions as Embiid is dealing (already) with right knee soreness while Drummond missed the Sixers' last game with an ankle injury. Saying that Embiid not playing is big would be the understatement of the year, but an absent (or limited) Embiid seems even more costly this season for Philly due to the even larger impact he's making on all ends of the court.

With Simmons still sitting out, the 76ers have lost an All-Defensive Team-caliber player, as well as 14+ points and nearly seven assists per game. But Philly continues to be strong defensively as Embiid continues to own the paint: the Sixers give up the seventh-fewest points in the paint per game, the second-fewest shots at the rim per game, and also give up the sixth-fewest 3-point attempts per game. On offense, Embiid has embraced a more playmaking approach, dishing out a career-high five assists per game — which also leads the team. And oh yes, he is the team's leading scorer too.

The Knicks, on the other hand, only have reserve C Nerlens Noel on the injury report (also a GTD to make his season debut) but are looking to pick themselves up after getting a little too cocky Sunday night... and then getting slapped with a hard dose of humbling reality.

New York got off to a 2-0 start, toppling the Celtics in a thrilling home opener and then shooting the Magic out of the gym en route to a 25-point road win. But then the 'Bockers turned around and hosted Orlando again two days ago, feeling a little too good about having another cakewalk, and got outhustled and outworked — and outscored 36-24 in the fourth quarter — in losing 110-104 as 12-point chalk.

Knicks boss Tom Thibodeau was clearly dismayed by his team's lack of effort, so expect his club to come out hungry and firing again tonight. New York has a deeper roster this year, with the additions of Evan Fournier and Kemba Walker, plus increased contributions from last year's eighth-overall pick Obi Toppin, and in reality, the Knicks have more offensive depth than Philly tonight — especially with Embiid in question.

With one (or both) of Philadelphia's star big men either absent or hampered, New York gains a massive edge with big men Mitchell Robinson, Julius Randle, Toppin, and the ageless Taj Gibson, who have helped lead the Knicks to an NBA-best 73.4 shooting percentage from inside five feet. Added points in the paint will open up more threes — of which the Knicks take a lot — for New York, which only plays into the home team's favor.

And say Embiid does lace them up (albeit at less than 100 percent)? Well it's not hard to envision the Knicks bringing the energy at home tonight, upping the tempo on the league's slowest-paced team, and winning in what is essentially a pick'em.

New York was one of the league's best Under bets last year, going 32-40 O/U, thanks to a No. 4 defensive rating rank and an offense that the fourth-fewest threes per game and played at the league's slowest pace.

This year, things are a little different. The Knicks are up to 16th in pace and down to 12th in defensive rating but the real story is how many threes New York is shooting... and my god is it shooting a lot. The Knicks are shooting an absurd 49 threes per game through the first trio of games this season, which is 19 more triples than last year. Last year, shots from beyond the arc accounted for 34.7 percent of New York's shots, and this year treys are now 50.2 percent of all of NY's offensive efforts.

It's resulted in New York being a perfect 3-0 O/U this season, although only one of its games has topped 217 points (tonight's total).

After going 34-38 O/U last year, the Sixers have employed a slower pace (from 12th to last), a less aggressive offense (from third-best 25.5 FTA/game to sixth-worst 17.0 FTA/g), and a dominating paint defense to help keep scores low — and are Philly is 2-1 to the Under this season and averaging a combined 218.3 ppg.

The Knicks are powered by a barrage of threes but the Sixers are great at limiting how many threes their opponents take — and make. Cut back the amount of triples hoisted by the 'Bockers, and it's hard to see this being a high-scoring game.

Neither the Knicks nor the Sixers have been particularly dominant rebounding teams so far, with both clubs grabbing less than 50 percent of all available boards, but one person that's been cleaning the glass has been New York star Julius Randle.

After averaging a career-best 10.2 rebounds per game last season, Randle is at 11.3 boards per contest through three games in 2021-22, which is second on the Knicks. Randle averaged 9.7 rpg in three games against the Sixers last year and with Embiid and his backup Drummond (who replaced the departed Dwight Howard), banged-up at best and possibly out at the worst, the road is clear for Randle to gorge on rebounds yet again.

Did you know that if you parlayed today’s NBA 76ers vs. Knicks predictions and picks in a single-game parlay, you could win $62.89 on a $10 bet? 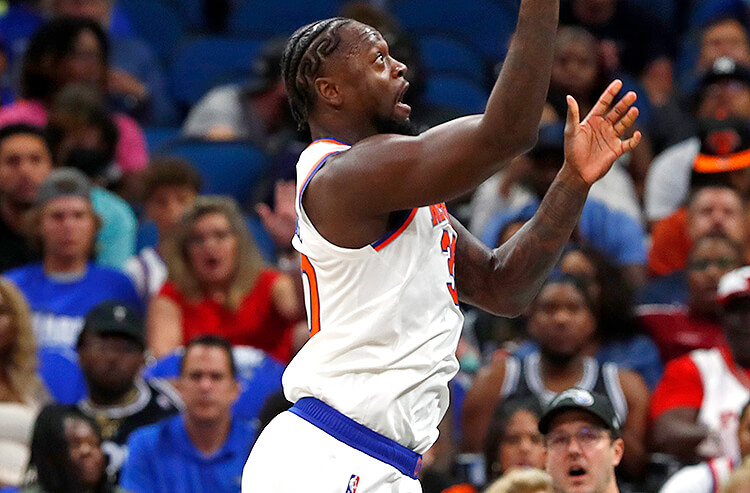 76ers vs Knicks Picks and Predictions: Banged-Up Embiid Give NY Value At Home
Provided by