Today’s NBA Player Prop Picks: Allow Me to Reintroduce Myself

A certain book is really slighting the reigning MVP, while we take a flier on an emerging stat-stuffer, and bank on a straight-up legend doing the right thing. Find the best value from around the league with Tuesday's NBA prop picks.

As we inch our way into the 2020-21 NBA regular season, value in prop markets will be easier to define for both bettors and sportsbooks, with larger sample sizes of data to mine.

But there are still intriguing prop bets that can lean both on last season's biggest trends, and emerging new opportunities that this season's shifts shed light on.

We're banking on a bit of both with our best NBA player prop picks for Tuesday, October 26.

(Editor's Note: These prop picks were made prior to Tuesday evening's news that LeBron James would be out for the Lakers tonight.)

Oklahoma City rookie Josh Giddey was touted as a stat-stuffing sleeper by many fantasy experts heading into this season, and it hasn't taken him long to show flashes of why.

After two games of sub-30 minutes, Giddey was unleashed for 34 mins against a tough 76ers defense Sunday, and dropped 19 points, eight rebounds and seven assists.

It was a confident coming-out party, and a showcase of just what he's capable of on a zero-expectations Thunder squad where he'll see all the opportunity he can handle.

Considering he almost topped this total with points alone in his last outing, we're feeling like the regression won't be that violent. Even a tidy 13/5/3 line gets the job done here, and this feels like the right time to buy Giddey stock.

LeBron James is nothing short of a basketball savant, and plays with an extremely cerebral approach, shapeshifting to get the most out of his surroundings.

Much was made of Russell Westbrook's offseason acquisition, and how exactly the Lakers would incorporate such a high-volume attacker, who did little off the ball and even less to space the floor.

Well, LeBron's taken it upon himself to help rectify some of those concerns. James – who over the past few seasons has steadily increased his 3-point volume – is averaging almost ten attempts from long range so far, and hitting 48.3 percent of them. While the accuracy is clearly unsustainable, the volume could remain while Westbrook acclimates himself and some L.A. shooters are injured.

Tonight, the Lakers face the Spurs, who were 23rd in opponent 3-point percentage last year. LeBron's O/U of 2.5 threes made seems very attainable given that he's sunk 14 in three games so far, with four being his season-low.

DraftKings is showing no love to the MVP.

Jokic is one of the NBA's preeminent triple-double threats, and a constant liability in this market, where he can pad stats in a number of categories.

As we broke down in our Nuggets vs. Jazz picks, DK is giving us a very generous plus-money price on Jokic's assists total, and a similar must-buy price for this multi-faceted prop.

Through three games, Jokic is averaging the fewest assists since his rookie season, and even at that mark, is tallying 47.7 points + rebounds + assists. While his 16 rebounds per are clearly going to fall, the assists will surely rise as well, and could effectively cancel each other out as the season rolls on.

And for those of you thinking that Utah's defense will rattle Joker, he averaged 56 in this market in three meetings with the Jazz last season, and clearly gets up for matchups with reigning DPOY Rudy Gobert.

Again, at plus-money, this is a must-bet.

Did you know that if you parlayed today’s NBA player props in a single-game parlay, you could win $62.58 on a $10 bet? 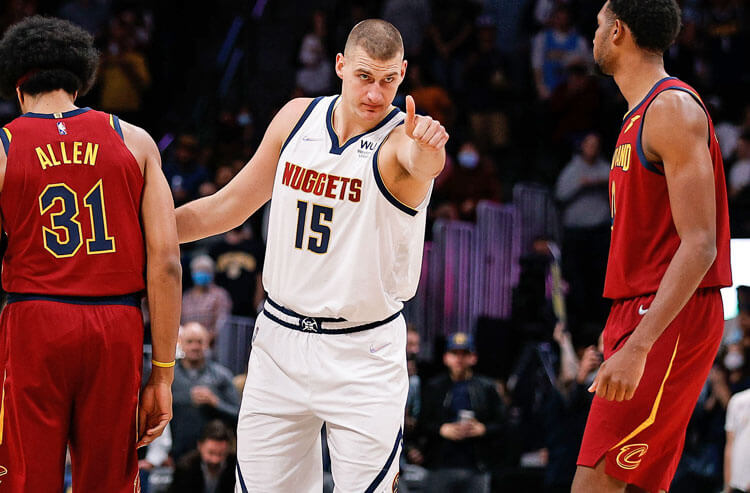 Today’s NBA Player Prop Picks: Allow Me to Reintroduce Myself
Provided by