The Bucks go into a win-or-go-home Game 6 with an undefeated record at Fiserv Forum in the playoffs. They are 2-2 ATS at home and are 5.5-point favorites for this pivotal matchup. Can Milwaukee stop KD and Brooklyn? Find out with our Nets vs. Bucks picks.

An all-time performance from Kevin Durant and a gutsy effort from a one-legged James Harden gave the Brooklyn Nets the inside track on the Milwaukee Bucks in their Eastern Conference semifinal matchup.

Now, with this series swinging back to Milwaukee, bookies are banking on the Bucks to counter in Game 6 on Thursday. Milwaukee is a 5.5-point NBA betting favorite facing elimination inside Fiserv Forum. The Bucks are undefeated in their own gym so far in the NBA Playoffs, going 2-2 ATS as a host.

Here are our free NBA picks and predictions for Nets vs. Bucks on June 17.

Milwaukee, in a must-win situation for Game 6, opened as 5.5-point chalk at TwinSpires and moved to -6, then back to -5.5, where the line remains at 5:30 p.m. ET. Underdog Brooklyn is drawing 57 percent of tickets and 68 percent of cash on the spread. "We're high on Nets futures, so we'd like to see the Bucks take Games 6 and 7," TwinSpires trading analyst Zachary Lucas said. The total is down a tick from 220.5 to 220, with 65 percent of tickets/58 percent of money on the Over.

The Under is 6-0 in the Bucks’ last six games following a loss. Find more NBA betting trends for Nets vs. Bucks.

Durant’s Game 5 showing was remarkable but would have been for not if the Nets’ role players didn’t show up. With Kyrie Irving out and Harden limited, veteran forwards Blake Griffin and Jeff Green combined for 44 points, helping to make up for those offensive shortcomings.

The Brooklyn backcourt, however, was MIA. Harden’s shot was rusty as a folding lawn chair (1 for 10) and fellow starters Joe Harris and Bruce Brown were a combined 3 for 16 from the floor for a collective seven points. Not exactly answering the call in a must-win game.

The Bucks jumped out to a 14-point lead after the first quarter, but early foul trouble forced them to protect starters and roll out some reserves, which allowed Brooklyn to hang around. Steve Nash made second-half adjustments and Durant started to do it all, proving he’s capable of playing up to the pressure.

That pressure fueled the Nets’ Game 5 performance (and forced Harden back in action) but won’t be as high heading to Milwaukee, knowing that a Game 7 will be back in Brooklyn this weekend. And even for a player of Durant’s status, recording another night like Game 5 will be tough. On top of that, hoping the Nets’ reserves and role players can meet those lofty standards — on the road this time — is a big ask.

Milwaukee’s second-half defense in Game 5 was too "on the fence." It didn’t commit to doubling Durant nor did it play tighter on the Nets’ other players. Instead, Mike Budenholzer (who has been completely outcoached) made it dealer’s choice for KD and was picked apart by isolation and Durant’s 10 assists.

Giannis Antetokounmpo appears to be throwing his hat into the defensive ring for Game 6. He hasn’t been Durant’s primary check in this series, spending just over four minutes guarding Brooklyn’s bomber but has limited Durant to 37.5 percent shooting in those matchups. He has the agility to keep up with KD and the length to contest his shots.

The Bucks opened as low as -3.5 at some shops but have climbed as high as -6, so we’re not getting the best of the number with Milwaukee at this point. However, early splits from sportsbooks show a decisive 82 percent of bets and 72 percent on money riding on Brooklyn, indicating reverse line movement — a telltale sign that sharper bettors are laying the points with the Bucks, if that eases your mind about eating the points with Milwaukee.

The Bucks are doing a solid job limiting the long-range threats of the Nets in this series, with Brooklyn shooting just 37 percent from deep and averaging 14 triples per game.

Sure, BK made 16 3-pointers in the Game 5 victory but four of those came from Durant, who hit some really tough looks from downtown, and 10 came from forwards Griffin and Green, who aren’t known as consistent shooters from beyond the arc.

Milwaukee will live with those two jacking from deep, especially on the road. Harris and Landry Shamet, the Nets’ primary snipers, were just 2 for 10 from distance Tuesday and have struggled in this series without superstars like Harden and Irving creating extra space on the wing.

As for Brooklyn’s defense, its switch-happy pressure hasn’t allowed for much space on the perimeter, with Milwaukee averaging fewer than 10 triples on 33.4 percent shooting from outside in the series — a great stat versus an offense that knocked down 14.4 3-point buckets per game in the regular season.

Those switches and subsequent mismatches, however, have allowed the Bucks to bruise Brooklyn inside. Milwaukee has run much more isolation, attacking the interior for an average of more than 50 points in the paint per contest. That success inside forces Brooklyn to inbound the ball on offensive possessions and neutralizes the transition attack, which has lost some teeth since Irving went down.

The Game 6 total is sitting at 220.5, which is the lowest Over/Under of this semifinal series. The previous game pushed with the total — depending on when you bet it — but the other four games have stayed below the number.

Lost in Durant’s incredible Game 5 showing was Harden’s gutsy game battling through a lingering hamstring injury that has plagued him in this series and throughout the second half of the season.

Harden couldn’t throw a grape in the ocean from a shooting standpoint but did make some pretty passes and contributed eight assists and six rebounds to the Nets’ win on Tuesday. Harden is expected to be on the floor tonight but there are a couple of likely scenarios that give value to the Under for his props.

Harden isn’t 100 percent and hamstring injuries are very easy to reaggravate, as we saw in the opening minute of Game 1. We’re not cheering for Harden to get hurt or anything, but there’s a solid chance he could. On top of this, should the Bucks or Nets jump out to a big lead, Nash may choose to pull Harden and save whatever he has left for a Game 7 back in Brooklyn or the pending Eastern Conference finals.

The Harden prop market most vulnerable in my eyes is his rebounding total. He did wrangle six boards on one leg in Game 5 and averages almost eight per game on the season, but he’s parking it on the perimeter on both ends and isn’t crashing the glass with much intensity.

His other main prop markets, points and assists, seem more volatile especially if he finds his stroke from outside. With that in mind, we’re going low on Harden’s rebounding total. 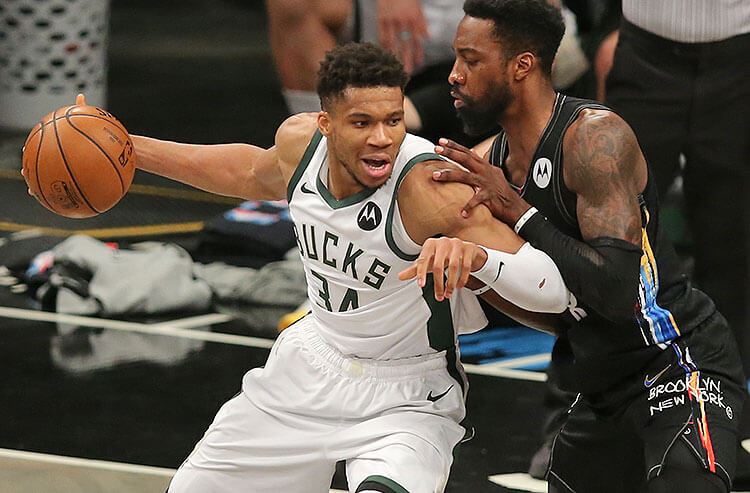 Nets vs Bucks Game 6 Picks and Predictions: Bucks Battle Back
Provided by