Knicks vs Nets Picks and Predictions: Nets Get Back in Win Column

The Nets, like everyone else who plays Phoenix, are looking to bounce back from a loss as they get set to battle their cross-town rivals. Find out Brooklyn can top this spread as we break down our Nets vs. Knicks NBA betting picks.

It's the Battle of the Boroughs tonight as the New York Knicks stroll cross-town to take on the Brooklyn Nets.

The Nets are off to an East-leading 14-6 start amid Kyrie Irving's ongoing absence, while the Knicks are stuck among a large glut of around-.500 teams currently fighting for the conference's lower-rung playoff seeds.

The books have the Nets installed as -6.5 NBA betting favorites — find out if they're worth that kind of advantage as we break down our NBA picks and predictions for Knicks vs Nets on Tuesday, November 30.

Books were split on the opening spread between Brooklyn -6 and -6.5, the latter of which is where the line currently sits. The total opened at 217 and has been bet down to 216.5. Use the live odds widget above to track any future line movements right until tip-off and be sure to check out the full NBA odds before betting to ensure you get the best number.

Knicks vs Nets picks and predictions

The Nets are heading into tonight looking to avenge a decisive loss to the Phoenix Suns, in which they failed to cover as 2.5-point favorites against a Suns team that has now won 16 games in a row. The books seem to be somewhat overestimating Brooklyn, who is among the NBA's worst ATS teams at 8-11-1.

But this is one game where we don't believe that's the case.

New York is winning and losing as it's supposed to right now. The Knicks are coming off a win over an anomalous Hawks effort in which everyone outside of Trae Young and Clint Capela was useless on one of the NBA's deepest teams. Prior to that, New York had gone 5-5 in its last 10 games, with the .500 mark more or less the win-loss barometer.

And the Knicks aren't giving us a ton of reason to assume they'll show up tonight. New York's defense has visibly regressed from last season, now just a league-average unit. While the Knicks led the NBA in 3-point defense last season, they've slid to 19th in 2021-22, conceding threes at the league's sixth-highest rate. That's not great news against a BK squad that ranks as the second-best 3-point shooting team (37.5 percent).

Also visibly regressing is Julius Randle, who's playing worse defense than last year and scoring nowhere near as much (or as efficiently) for a team that, despite its offseason "upgrades" on offense, still very much needs a lead gun.

To boot, the Knicks are dealing with multiple injuries, particularly to the point guard spot, where they just shelved Kemba Walker, have Derrick Rose day-to-day, and are currently starting the not-a-point-guard Alec Burks. With centers Nerlens Noel (questionable) and Taj Gibson (out) busted, and swingman RJ Barrett also possibly sitting, the Knicks are looking at as many as four players missing from an already-thinning rotation.

The Nets have their absences too, but have still battled to the East's top seed despite shortages and the majority of their rotation underperforming thus far this season. Kevin Durant has been nothing short of brilliant, squarely in the MVP race, and his presence alone in this game is enough to make us favor the Nets against this spread.

Brooklyn has a matchup edge at virtually every position and will potentially be facing the Knicks' B-team. There's not much need to over-think this one, especially with the Nets consistently bouncing back from letdowns, trending 6-1 ATS following a loss to the spread.

Especially with their injuries, the Knicks would be wise to buckle down and try to win this game on defense — they are a Tom Thibodeau team after all. Problem is, they're not very well equipped to do so.

As mentioned, the Knicks' league-leading 3-point defense from last season is starting to look more like good shooting variance with each passing game. The Knicks sit below league-average this season with largely the same personnel, but still concede among the most threes in the NBA. Even with Joe Harris out, the Nets are still a lethal team from long distance and if the Knicks sell out on stopping the three, they'll open up room for the league's best one-on-one scorer (Durant) and one of its most dynamic playmakers (James Harden) to carve them up. It's not an appealing scenario.

Although Brooklyn's somehow a Top-10 defense this year (in both adjusted metrics and not), it's still been able to easily top tonight's total (216.5) recently against teams like the Celtics, Cavs, Magic, and Pelicans — who all profile to some degree of injured, plodding, defense-first, or scoring-challenged.

The Knicks look like they'll struggle to push this total on paper, but they could quickly find themselves in a firefight if the Nets get hot, which, with Durant's scoring efficiency this season, is a constant liability.

The Nets are the NBA's sixth-fastest team and far more likely to dictate the tempo of this game. Count on them to drive the scoring instead of focusing on clamping down on this wounded Knicks attack.

With New York's point guard rotation decimated, score-first guard Alec Burks is taking over the reins for this team. He dropped 23 points on Atlanta in his first starting gig, getting 17 shots in his increased role.

Burks' usage should be sky-high again in this game, especially if Barrett sits. Despite fleeting roles throughout his NBA career, he's been a confident gunner who can summon his own offense. He played 37 minutes against Atlanta and averages 16.9 pts per 36 minutes this season. His projection for tonight's game should be even more optimistic with the increased primacy on offense.

And while his shot selection might occasionally leave something to be desired, Brooklyn surrenders the league's second-most points to opposing PGs, making tonight's Burks points prop (O/U 15.5) even more appealing.

You can find this prop paying out +120 at bet365, so shop around and take advantage of Burks' increased opportunity.

Did you know that if you parlayed today’s NBA Knicks vs. Nets predictions and picks in a single-game parlay, you could win $70.18 on a $10 bet? 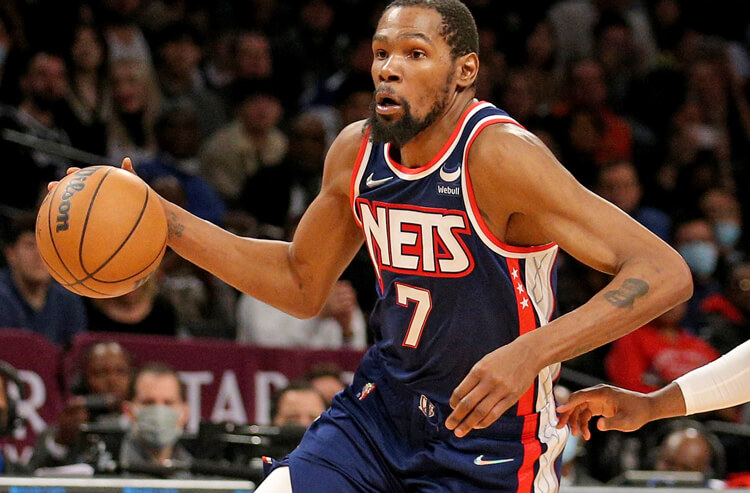 Knicks vs Nets Picks and Predictions: Nets Get Back in Win Column
Provided by