Hawks vs Knicks Game 1 Picks and Predictions: Hunting an Upset

De'Andre Hunter proved to be a two-way force this season, and stands out amidst a deep and talented Hawks roster as the best option to contain Knicks star Julius Randle.

The New York Knicks earned the fourth seed in the Eastern Conference and will be hosting the Atlanta Hawks in the first round of the NBA Playoffs. It’s an unbelievable one-year turnaround for a team that has been desperate for success. The fans in Manhattan will have Madison Square Garden rocking when Game 1 tips off at 7:00 p.m. ET on Sunday, May 23.

Who has the NBA betting edge Sunday? Keep reading our Hawks vs. Knicks picks and predictions.

This line jumped the fence, with TwinSpires opening New York -1, then flipping to Atlanta -1, and the game is a pick 'em as of 4:30 p.m. ET. The Knicks are taking 75 percent of tickets and 57 percent of cash on the spread. The total is down to 213 from a 215.5 opener, with the Over landing 66 percent of tickets/57 percent of money.

The Hawks are 14-6 ATS when avenging a road loss against an opponent this season.  Find more NBA betting trends for Hawks vs. Knicks.

In many ways, the Hawks and Knicks had similar seasons. Both teams were in the average-above average range for the first half of the year, and they each really turned it on in the second half of the season. These teams won at extremely high clips in the months heading into the postseason, and an argument can be made that this is the most evenly-matched first-round series. The Hawks are the more talented team between the two, but the Knicks are tenacious and play the right way.

With all that said, it’s ultimately difficult to pick against the more talented roster, and Atlanta just has a lot more firepower than New York. Julius Randle was the best player on either of these teams during the regular season, but the Hawks are a good defensive team and have the personnel to make things difficult on him. Atlanta has the luxury of sticking De’Andre Hunter on the big man, who is certainly capable of making things tough on him. The Hawks can also send a little help in his direction, as Nerlens Noel isn’t a threat on the offensive end.

And when Elfrid Payton is on the floor for New York, that’s two liabilities in the same lineup. Also, for what it’s worth, Randle hasn’t experienced what it’s like to be the focal point of a playoff series. He could struggle to maintain his regular-season level here.

Offensively, the Hawks will have it tough against a Knicks team that was among the league leaders on D this season, but they should be able to make enough shots to steal Game 1 on the road. The Hawks were Top 10 in the league in offensive rating this season, and Trae Young should really be able to get downhill and make plays against this defense. Young’s quick first step will allow him to get into the paint, where he’ll either finish, draw fouls or kick it out to one of Atlanta’s many lethal three-point shooters.

The Payton dilemma is a more serious one than people let on early in this series. His minutes are going to be brutal for the Knicks, who desperately need to get Derrick Rose, Immanuel Quickley or Frank Ntilikina more of his playing time. If Tom Thibodeau doesn’t make that switch, Atlanta will take control of the series early.

In the final 15 games of the regular season, the Knicks had the third-best defensive rating in the NBA and the Hawks were 10th in that span. Both of these teams are capable of locking in and getting the job done on the defensive end. That’s New York’s identity overall, and Atlanta also leaned that way once Nate McMillan took over as the team’s head coach.

Expect these to be some hard-fought games, especially early in the series. These teams have likely been spending days just focusing on how to stop the opposing squad’s best players, and there should also be some nerve-infused misses with both of these teams being relatively new to the postseason.

During the regular season, Randle averaged 37.3 points per game in three meetings with the Hawks, and he shot a ridiculous 58.1 percent from the floor and 50.0 percent from three in those games.

The only issue is that he scored 84 of those points in the final two meetings between these teams, and Hunter didn’t play in either of those. Hunter has a big body and knows how to defend. He’s going to really make Randle work for everything.

Capela will also be a problem for Randle, as a big lengthy center who has the coordination and footspeed to backpedal and hang with Randle. And overall, the Hawks are going to do everything in their power to not let Randle be the one that beats them here. 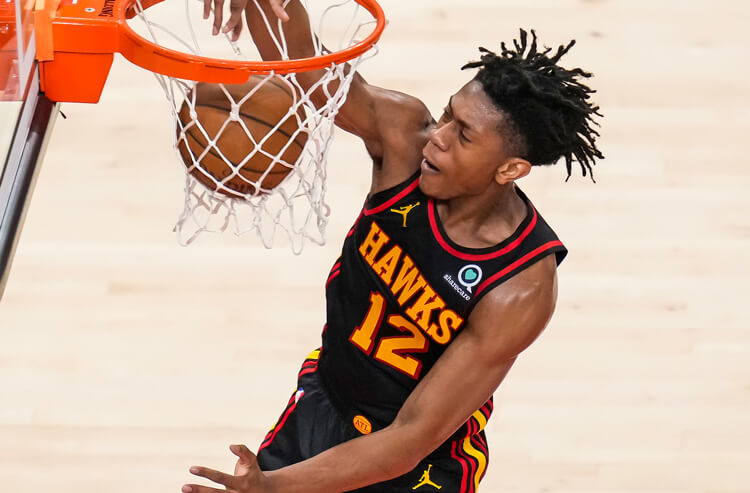 Hawks vs Knicks Game 1 Picks and Predictions: Hunting an Upset
Provided by