Memphis pulled off one of the most incredible wins in recent memory in Game 3, and now has all the momentum in this series. Find out if Minnesota can dig deep and find a way to even the score with our Grizzlies vs. Timberwolves NBA betting picks.

Game 4 of the Memphis Grizzlies and Minnesota Timberwolves' opening-round series has some massive shoes to fill.

The Grizzlies stunned the Timberwolves in Game 3, clawing out of multiple 20-plus-point holes to take a decisive win and a 2-1 edge in the best-of-seven.

A shocked and demoralized Minnesota squad now must rally at home — find out if it can with our Grizzlies vs. Timberwolves NBA picks and predictions for Saturday, April 23.

Memphis opened anywhere between -2.5 and -3.5 at various books, now sitting at -3 across the board after slight movement in both directions. The total also opened at a varied range between 232.5 and 234, now mostly sitting at the former number.

Grizzlies vs Timberwolves picks and predictions

The "betting trend to know" above really spells it out. Memphis has been crushing spreads all season and continues to not get enough respect from books, despite being one of the NBA's biggest stories all season long.

The Grizzlies absolutely humiliated the Timberwolves in Game 3, coming back from 25-ish-point deficits on two occasions to not only win outright, but cover the measly 1.5-point spread easily. It was one of the most bizarre and impressive wins in recent playoff history, and deflated a Minnesota team that came out pissed off and playing simply apex defense on its home floor — only to completely fall apart.

The Wolves were already sent back to the drawing board after the supposed Steven Adams advantage blew up in their face, and they might be short on answers this time. The Grizzlies simply look too thorough and deep, and Minnesota has been far too inconsistent.

Karl-Anthony Towns has disappeared for large stretches of this series, averaging just 12.5 points and 8.0 rebounds while the Grizzlies' small-ball frontcourt has put him in foul trouble each of the past two games. Anthony Edwards has done what he can, but with Towns limited and D'Angelo Russell seemingly always mercurial, the Wolves aren't pressing one of the NBA's best defenses (sixth in regular-season rating, third both over the final 15 games and in playoffs so far).

And Memphis appears to have solved Minnesota's D, or at least knows when to take advantage of it. The Wolves built an early lead off frankly unsustainable defensive pressure and kept the Grizzlies flustered and on their heels, constantly being forced back in transition. Memphis kept its cool, executed better in the halfcourt, and snuffed those opportunities. It, of course, didn't help that Minnesota went absolutely ice cold from the field for several stretches, and Memphis shouldn't count on that happening again in Game 4.

But we also shouldn't count on the Grizzlies playing anywhere near as poorly as they did in the first quarter. While this team is young and has shown lapses over the season, it's far more consistent than Minnesota, and has the higher median on both sides of the ball.

The Wolves have to be rattled as all f*** after somehow losing Game 3, along with any grip whatsoever on this series. They won't roll over and die, but after their last effort, we don't see how any bettor could rationally have confidence in them right now.

Sometimes you've gotta zig when things look like a zag.

Such is the case with the total here, as it's plummeted to 232.5 from 240.5 in Game 2 and 237 in Game 3 on the backs of two of the Wolves' worst offensive performances of the season. Minnesota was the league's best offense for large chunks of post-All-Star play, and while the Grizzlies are a good defensive team, they're not Fort Knox.

Minnesota can't possibly be any worse on offense than it was the past two games, and the extent to which this total has been depressed makes it tough not to back the Over with the potential for fireworks between these two teams.

This matchup is a powder keg. Two of the NBA's five fastest teams (with Minnesota being the fastest), who also both posted Top-7 offensive ratings and were Top 3 in turnovers forced, springing fast break points by the dozens.

This total's fallen because one or both of them had absolutely putrid offensive stretches for large chunks of the previous two games, and both coaches are crafty and disciplined enough to rein their troops in and get better performances in Game 4.

We stung a Memphis alt-spread bet the last game, and we're inclined to go back to that well, with this spread still seeming too short.

Memphis won Game 3 by nine points, despite the fact that it trailed — at separate points in the game almost a half apart — by both 26 and 24 points.

The Grizzlies just aren't fans of close games, even when pulling off two seemingly unfathomable comebacks in the same contest. It continued a trend that's seen the Grizz win 10 of their last 11 games by eight or more points, with an average victory margin of 20.45. They're a whirlwind that blows opponents out of the water and finishes with a killer instinct that belies both their youth and occasional inconsistency.

Minnesota has to be doubting itself coming into tonight, and Memphis has both the depth and swagger to take full control of this series, even if Dillon Brooks sits. The Grizz are the ones forcing the adjustments and have the higher ceiling — give them a little more credit than one possession.

Did you know that if you parlayed today’s NBA Grizzlies vs. Timberwolves predictions and picks in a single-game parlay, you could win $75.73 on a $10 bet? 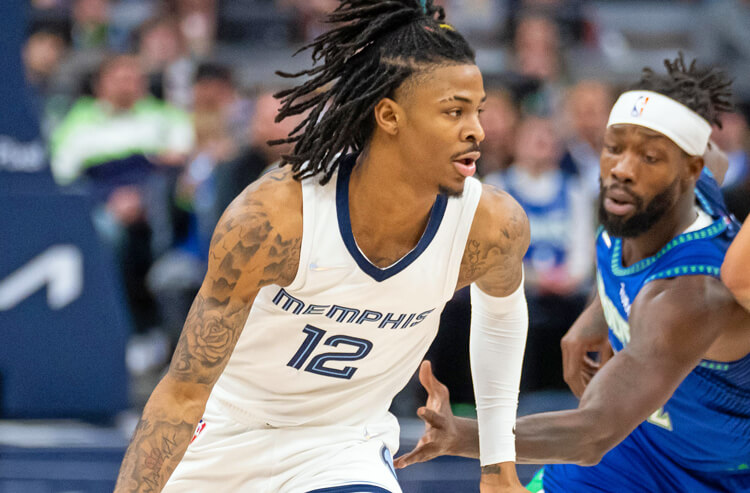