Portland hosts Boston tonight as it tries to regroup its franchise, with its GM recently fired, its star sidelined, and its future in serious doubt. Find out if the road team can take advantage with our Celtics vs Trail Blazers NBA picks.

The Boston Celtics and Portland Trail Blazers will both try and get back in the win column when they clash at the Moda Center on Saturday night. The Celtics took a frustrating 137-130 loss to the Jazz Friday night, while the Blazers were skunked 114-83 by San Antonio on Thursday.

The Blazers will be without franchise flamethrower Damian Lillard, while the Celts could still be without All-Star swingman Jaylen Brown.

Find out who can make the most of the matchup as we check out our NBA picks and predictions for Celtics vs Trail Blazers on December 4.

Boston opened at -1.5, where they remain as of writing. The total has also seen little movement, opening at 217 and mostly remaining there, with select outlets offering 217.5.

Injuries will be the most important variable in this contest, with Lillard sitting for the Blazers and Brown possibly joining him on the sidelines. But while Boston has weathered Brown's absence for stretches already this season, the Blazers might be up shit's creek without Dame.

Simply put, Portland is a score-first team without its first scorer. Yes, Lillard's early season has been consumed by a confounding shooting slump, but he's still one of the game's most dangerous offensive threats, and someone whose gravity on offense creates so much more room for his teammates.

Instead, Boston will get to sic pitbull Marcus Smart on CJ McCollum, while also fielding stout defender Jayson Tatum against Norman Powell. With Lillard and leading bench scorer Anfernee Simons both sidelined, Portland could struggle to put up points in this game against the NBA's fifth-ranked adjusted defense.

And if Portland's going to win this game, it's going to have to be on the offensive end, because the Blazers can't stop a runny nose. Portland sits all the way down at 30th in adjusted D-rating — last in the league.

Boston isn't an offensive powerhouse by any means, but it will make scoring difficult enough for Portland that the buckets the Blazers' leaky defense coughs up on the other end should make up this margin.

Some folks might be thinking that the Blazers will rally after toxic GM Neil Olshey was canned yesterday, but Olshey's firing was a slow train coming, and if anything, will probably signal major roster upheaval in middling Portland's near future.

Bettors may also point to Portland's polarizing home/away splits (10-2 at home, 1-10 on the road), but a variable that elemental is baked into the spread, and no team of this caliber is sustainably that hot at home. The Blazers simply don't have the scoring depth to topple Boston's defense with both Lillard and Simons in suits. Hell, the Spurs limited them to just 83 points in a 31-point rout their last game out. In Portland.

We're leaning with Boston either way, but keep an eye on Jaylen Brown's status. If he's cleared for this game, feel free to hammer the Celtics spread.

This total pretty much comes down to how terrible Portland's defense is, and whether Boston's able to run up a large number. Given that the Celts are a defense-first team that loves strangling scores (9-13-1 O/U this season) and lost an energy-depleting shootout in Utah last night, we doubt that will happen.

As mentioned above, the Celts can counter both Portland's best scorers with good defenders, while tag-teaming Jusuf Nurkic in the post with Al Horford and Robert "Time Lord" Williams. While the Blazers won't put up much of a fight themselves on defense, Boston surely will aim to slow this one down and conserve energy after an anomalous game last night produced a whopping 267 points. Remove that obvious outlier, and the Celtics are 2-8 against this total in their last ten games.

Boston ranks 24th in pace, while Portland is no speed demon either at 19th. With the Blazers significantly handicapped on offense, we just don't see this game moving fast enough to top this total.

It's just really difficult to side with the Blazers here, wicked home record and all.

They're without three rotation players, one of whom is their franchise guy. What's left of their team matches up poorly. And their great home record – the main angle that's sticking out as a reason to back them – seems more like an aberration. The only teams in the entire NBA with equal or better home records are the Warriors and Suns, and Portland has been nowhere near this good at home in recent seasons.

Again, we'll point to the total ass-kicking the 7-13 Spurs just laid on them Thursday night. Even with Brown out, Boston's easily capable of beating this team by two or more points.

Did you know that if you parlayed today’s NBA Celtics vs. Trail Blazers predictions and picks in a single-game parlay, you could win $26.45 on a $10 bet? 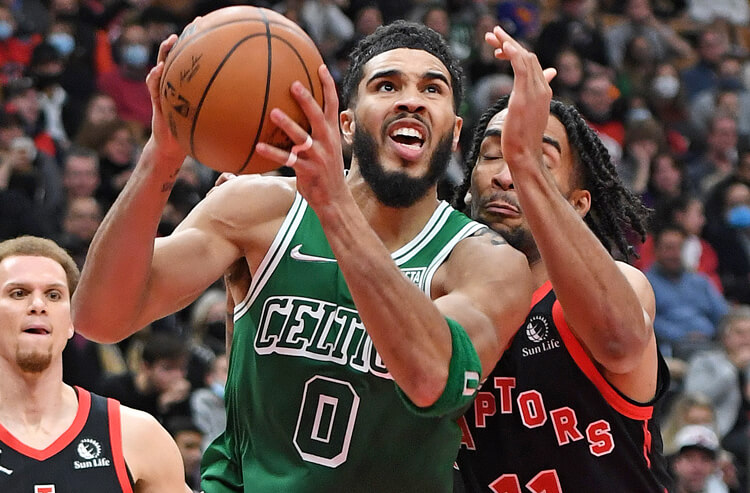