Brooklyn's barely holding off Chicago atop the East, and the Bulls can gain more ground against a BK squad on a back-to-back tonight. Check out our Bulls vs. Nets picks to find out if the road team can stampede its way to a win.

After beating the New York Knicks on Thursday, the Chicago Bulls look for the New York sweep when they face the Brooklyn Nets at the Barclays Center. The Bulls are just 1.5 games behind the Nets at the top of the Eastern Conference standings, so this game is rather important. You aren’t going to want to miss it, especially with how exciting these teams can be to watch.

Will Chicago find a way to pull off the road victory here? The NBA betting odds tabbed them as 3-point underdogs, but keep reading our Bulls vs. Nets NBA picks and predictions for Saturday, December 4.

The Nets opened as 3-point favorites against the Bulls and the line has barely moved at all, with only one site having Chicago as a 3.5-point underdog. Meanwhile, the total has gone from an opening number of 219.5 to as high as 222. However, it mostly sits at 221.5.

The Nets are 0-7 against the spread in their last seven games against teams with winning percentages greater than .600. Find more NBA betting trends for Bulls vs. Nets.

Bulls vs Nets picks and predictions

The Nets earned a good win over the Minnesota Timberwolves last night, but it took a lot of energy from them to get that one across the finish line. This Brooklyn team is now going to be a bit worn down, which is not what you want heading into a matchup with Chicago. The Bulls are currently seventh in the league in defensive rating, and they really lock down the perimeter well. That’s largely a product of Lonzo Ball and Alex Caruso, and both are capable of hounding James Harden in this one. They aren’t going to completely bottle him up, but he’ll have to work hard for his buckets.

Chicago doesn’t have the means to stop Kevin Durant in this game, but not many teams do. The Bulls should, however, be able to contain the rest of these Nets players, which will give Brooklyn a hard time winning this game. The only thing that would potentially prevent that would be Caruso missing this game. He’s listed as questionable, but Chicago should be able to do a solid enough job on that end of the floor without him.

The Bulls have a Top-10 offensive rating, and any fatigue the Nets are feeling from last night will only make it hard to contain a Bulls team that has DeMar DeRozan, Zach LaVine and Nikola Vucevic. All three of them are capable of going off, and Ball is going to find DeRozan and LaVine in transition whenever he can. That will make it tough on Brooklyn, if the team does have tired legs. There’s also the fact that Chicago beat Brooklyn by 23 when these teams last played.

Each of the last five meetings between these teams has gone Under the total. These teams are both in the Top 10 in the league in defensive rating, and that makes it hard to believe that this will turn into a high-scoring game.

Over the last two seasons, the Under is 17-6 when the Bulls take on Atlantic division opponents. Those games had an average of 216.1 points per game scored, which is well under tonight’s number. The Under is also 8-1 when Brooklyn has played in games with a total of 220 or higher this year. The reality is that this Nets team plays way better defensively than they are given credit for, and their offense isn’t as explosive as usual with both Kyrie Irving and Joe Harris sidelined.

There’s still one sportsbook hanging 3.5 out there — which is why you need to be checking the Covers odds page — and that line is too hard to pass up in this game. However, it’s still worth taking if you are getting Chicago as a 3-point underdog. The Bulls are 5-2 ATS in their last seven road games and they’re also 4-1 ATS in their last five games against teams with winning straight-up records. Meanwhile, the Nets have been pretty bad to bettors recently, going 0-5 against the spread in their last five games as favorites and 0-7 against the spread in their last seven games against teams with winning percentages greater than .600.

Brooklyn is also coming off a hard-earned win over the Timberwolves last night. The Nets needed Durant to play 38 minutes and Harden played 36, which is rather significant when considering that the Bulls had the night off. Chicago should be well-rested coming into this one, which is why Billy Donovan’s team is such a good bet to keep this one extremely close — or win outright.

Did you know that if you parlayed today’s NBA Bulls vs. Nets predictions and picks in a single-game parlay, you could win $26.45 on a $10 bet? 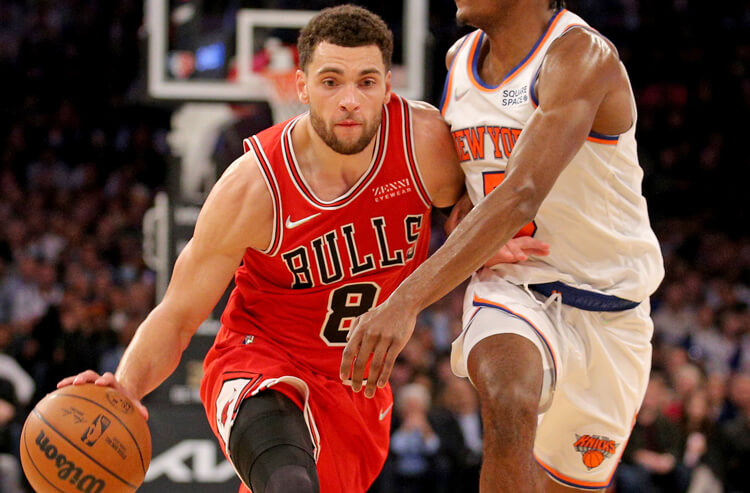 Rockets vs Kings Picks and Predictions: No Luck for Houston in Sactown Rematch
Chris Gregory | Jan 16, 2022

Jazz vs Nuggets Picks and Predictions: No Answers For Jokic
Jason Logan | Jan 16, 2022