The New York Knicks made a big rotation shakeup and the early results are promising. Is that enough for us to back the 'Bockers tonight as slim home dogs vs. a Bulls team struggling with consistency? Find out in our NBA betting preview.

Both the Chicago Bulls and New York Knicks have cooled off considerably from hot early-season starts, and each club will be looking to jumpstart another winning streak when they tangle tonight at Madison Square Garden.

Chicago started the year 6-1 SU but has gone 8-7 SU since then. It's still playing better than New York, which started 5-1 SU, has gone 6-9 since, and is installed as a slim NBA betting home underdog tonight.

Here are our best free NBA picks and predictions for Bulls vs. Knicks on Thursday, December 2, with tip-off at 7:30 p.m. ET.

The Under is 5-0 in the last five head-to-head meetings. Find more NBA betting trends for Bulls vs. Knicks.

Bulls vs Knicks picks and predictions

Chicago is well-rested coming into tonight's matchup, having a full two days off after toppling the Hornets in a shootout on Monday. The Bulls will be looking to make it two wins in a row tonight, although consistency has been something they have struggled with recently, going 4-4 SU and ATS over their last eight games.

The Bulls are still sixth in the league in defensive rating, eighth in opponent points in the paint, and opponent points per game, but it's been some inconsistent offense that's plagued the team. Chicago is averaging 110 ppg during this yo-yo stretch but has four games below that number and just two games above 114 points — we're just not sure what to expect night-to-night from the Bulls from an offensive perspective.

For the Knicks, it's been a little addition by subtraction. After getting embarrassed by Phoenix at home — and continuing a string of games where their starters have been consistently outplayed — the Knicks sat offseason acquisition (and starting point guard) Kemba Walker for the second half of a back-to-back on Saturday. With Alec Burks in his place, New York earned a hard-fought road win against Atlanta, with the team playing better defense and the starters finishing as a net positive.

That prompted coach Tom Thibodeau to declare that Walker would be "out of the rotation" for the foreseeable future, with Burks getting more minutes in the starting five and the reserve minutes going to surging sophomore Immanuel Quickley and veteran Derrick Rose, who returned Tuesday from injury. Game 2 of the Walker-less Knicks rotation was a 112-110 home loss to Eastern Conference power Brooklyn, where the team went toe-to-toe with the Nets (with RJ Barrett leaving after nine minutes due to illness) but ultimately couldn't stop Kevin Durant and James Harden.

While Burks isn't a true PG, he adds better size, shooting, and defense to the starters, with Julius Randle able to help offset the playmaking duties as a point-forward. With the reserves, Quickley continues to get heavy run (and crunch-time action) while Rose played 35 minutes after missing three games due to an ankle injury.

After a 10-game malaise of uninspired basketball, the Knicks have given two straight encouraging efforts, which makes sense, as they're giving more minutes to their better players. These teams have played twice already (both in Chicago), with each team coming away with a win. Considering the Bulls have been a .500 team as of late — and New York is showing great improvement following the roster shakeup — we're going to lean with the Knicks as a slim home dog tonight.

The high-scoring Knicks of earlier this season are dead and gone, with the team going 9-2 to the Under in their last 11 games, with the two Overs coming against the Suns and Nets — two of the Top 5 offenses in the league over the last month.

New York's defense has also made a bit of a return, giving up just 102.5 points during this 11-game span, while facing an average combined total of 214.5 each game.

As mentioned above, Chicago's defense has still remained stout, but even totals have been hit-and-miss with the Bulls, at 4-4 O/U over their last eight contests. Looking at those results, however, we see that those Overs came against Charlotte (No. 4 offense, No. 30 defense in November), Miami (total barely topped a paltry 209.5), Houston (26th in defense in the last month), and Denver (faced a season-low 205.5 total).

Facing off against a Knicks team that is again re-establishing itself on defense — while still not finding its full offensive flow just yet — has us thinking this will be anything but a shootout.

This total opened at 213 but quickly plummeted to 209.5. That's a tough move, but considering the Under has cashed in each of the two prior meetings (average of 209.5 ppg), we think it will still go a perfect 3-0 tonight.

One of the big developments out of New York's loss to Brooklyn was star forward Julius Randle openly complaining about a lack of fouls being called against defenders when he drives to the hoop. That's something Randle got a technical foul for during that game — and he said postgame that referees told him he's stronger than his opponents and the contact doesn't affect him.

Randle only had two free-throw attempts that game (NY was outshot 25-12 at the charity stripe overall), but the NBA announced yesterday that they did in fact miss some critical calls in that game... including Randle being fouled on a key play.

Now, it's not scientific, but there tends to be a correlation between players complaining about fouls, the league actually apologizing for missing calls, and the player getting a few more whistles in their favor in the immediate future.

Randle is averaging 18.9 ppg in November, but went for 24 points in that loss to Brooklyn, despite getting just two free throws. With no true point guard in the starting lineup, and Chicago possessing one of the league's best backcourt defending duos, look for New York to attack often with Randle driving to the hoop — and the referees to "coincidentally" give him a few more calls... and a few more free points.

That should be enough for him to get Over his points total tonight.

Did you know that if you parlayed today’s NBA Bulls vs. Knicks predictions and picks in a single-game parlay, you could win $61.16 on a $10 bet? 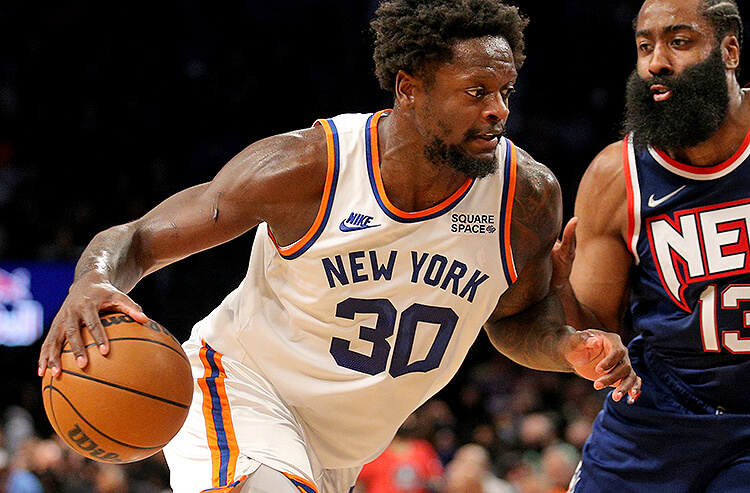 Bulls vs Knicks Picks and Predictions: Back New-Look New York As Slim Home Dog
Provided by