Spurs vs Trail Blazers Picks and Predictions: Spurs Can Handle Blazers Without Lillard

Portland hosts San Antonio tonight but has to do so without the services of Damian Lillard. Our preview suggests you take advantage of a line that doesn't seem to reflect the star's absence. Read more in our Spurs vs. Trail Blazers picks and predictions.

The Portland Trail Blazers are coming off a win and cover over the Detroit Pistons, which snapped a three-game losing streak. Now, Chauncey Billups’ squad will look to handle its business at home in a Thursday night meeting with the San Antonio Spurs.

Will San Antonio find a way to go into the Moda Center and steal one from Portland? Continue reading our free NBA betting picks and predictions for Spurs vs. Trail Blazers to find out.

The Blazers are without Damian Lillard in tonight’s game, but they opened as 3.5-point favorites in this one and are favored by as much as 5 now. Even despite the superstar’s absence, the public is leaning heavily towards Portland here. As for the total, the number opened at 217.5 and is now as low as 216.

The Blazers are 0-4 ATS in their last four games following a SU win of 10 or more points. Find more NBA betting trends for Spurs vs. Trail Blazers.

The Blazers are going to be without Lillard for at least another week, but you wouldn’t know it when looking at the lopsided action in this game. A large majority of the early tickets are coming in on Portland, and the money is also similarly on the Blazers’ side. That’s a bit of a headscratcher when considering Portland is missing one of the best scorers on the planet. With Lillard out, the Blazers no longer have their full backcourt intact, and that is their biggest positional advantage on a nightly basis.

While Portland still has CJ McCollum and Anfernee Simons to lean on, the Spurs are more than capable of matching their production with Derrick White, Dejounte Murray and Lonnie Walker. The three of them are all capable of going off on any given night, and Murray is actually one of the best defensive guards in basketball, so he can also go out there and really hound McCollum in this one. That would be an absolute nightmare for the Blazers, as they’d have no chance of winning this game without a big performance from both guards.

Jusuf Nurkic is another very talented player for this Portland team, but he will also have a difficult matchup against Spurs center Jakob Poeltl. Poeltl isn’t anything to write home about on the offensive end, but he’s one of the best interior defenders in the entire NBA. He should be able to prevent Nurkic from having a huge night, and that will be crushing for this Blazers team.

Overall, it’s just a little surprising to see where things stand with this one. These teams are pretty evenly matched when you take Lillard out of the equation. And an argument can be made that the Spurs should win this game outright, not just keep it close.

The Under is 5-1 when Portland is playing its third game in four days this season, and it also happens to have hit in each of the last two meetings between these teams. Neither one of them are anything special on the defensive end, but San Antonio is 15th in the league in defensive efficiency. Against a normal team, that might not stand out. However, it could look a little better against one that is missing one of the best scorers in the league.

It also doesn’t hurt that the Spurs attempt the fewest threes per game in the league, and they’re shooting just 34.2 percent from deep on those tries. That’s only the 16th-best mark in basketball, and it’d need to be better than that to strike fear in opponents.

All in all, this should be something of a grind to watch, with the Spurs really focusing on defense against a Blazers team that could miss a lot of shots here.

The Spurs are well-rested coming into this game, as they haven’t played since earning a 116-99 victory over the Washington Wizards on Monday. Since the start of last season, San Antonio is 12-3 ATS when playing only its second game in a span of five days. The average score in those contests saw the Spurs outscoring opponents by an average of 112.1 to 109.1. Meanwhile, the Blazers could be a little worn down in this one.

San Antonio is also 8-5 ATS when coming off an upset win by 10 or more points as a home underdog under Gregg Popovich. There’s no denying that the Blazers have been excellent at home this year, as the team is 10-1 SU and 9-2 ATS in home games. However, Portland relies heavily on the things that Lillard can do with the ball in his hands — especially in clutch situations. In a game that could be close down the stretch, it’s hard to envision the Blazers finding a way to pull this one out.

Did you know that if you parlayed today’s NBA Spurs vs. Trail Blazers predictions and picks in a single-game parlay, you could win $26.45 on a $10 bet? 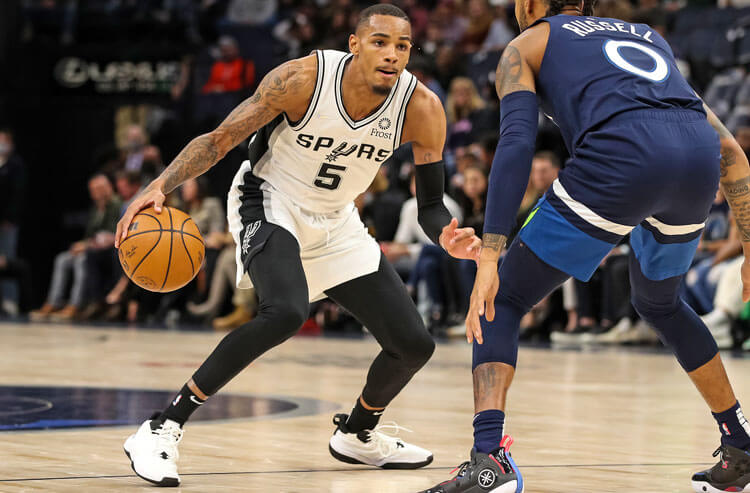 Spurs vs Trail Blazers Picks and Predictions: Spurs Can Handle Blazers Without Lillard
Provided by

Thunder vs Warriors Picks and Predictions: Everybody in the Poole
Kenny Ducey | Feb 6, 2023