The Bombers are on fire right now and are sending their ace to the hill tonight against the Chi-Sox. Is there any hope for one of MLB's saddest offenses to keep up? Probably not, as our Yankees vs. White Sox picks explain.

There isn’t a team in the league that is playing better baseball than the New York Yankees, as the Bronx Bombers earned a 15-7 victory over this Chicago White Sox team on Thursday and have now won 16 of their last 18 games.

Will New York keep it rolling against a Chicago team that was also playing well heading into yesterday’s loss? Keep reading our Yankees vs. White Sox MLB picks and predictions for our favorite plays on Friday, May 13.

New York opened as a -161 favorite, and the line is now up as high as -180 on one sportsbook. The best price you’ll see on the Yankees now is -165, unless you opt to take the run line.

As for the total here, the number opened at 7.5 and has mostly stayed there. There is, however, one book that has it up at 8.

Gerrit Cole (2-0, 2.67 ERA): After a slow start to the year in which Cole gave up eight earned runs over the 11 1-3 innings he pitched in his first three starts, the righty has gotten back to his usual self. Cole pitched 6 1-3 innings of one-run ball in a 2-1 win over the Texas Rangers last game — the only run he has given up in his last 19 innings of work. Cole has also racked up 25 strikeouts over the last three games.

Vince Velasquez (2-2, 3.97 ERA): Velasquez has had an up-and-down career to this point, but he is really in a groove entering this game. The 29-year-old has allowed just one earned run over his last 10 2-3 innings on the hill, and he will now look to try and slow down one of the best offenses in baseball. Working in his favor is that Velasquez has a 2.51 ERA in three home starts.

The Yankees are 19-7 in their last 26 games as favorites. Find more MLB betting trends for Yankees vs. White Sox

It’s hard to go against the Yankees, as there really isn’t much New York isn’t great at right now. If there’s one knock against the Yankees, it’s that they don’t have enough dangerous left-handed bats in their lineup, and that’s something that will matter against most right-handed starters.

However, Velasquez throws his fastball 41.9% of the time (according to Baseball Savant), and the Yankees just have far too many hitters that are capable of pouncing on any misses that are thrown too hard.

The Yankees are currently fifth in the league in runs scored, and they’re up at second in MLB in home runs. The team is also fourth in the league in slugging percentage and second in on-base plus slugging. With that said, this is not a lineup that any pitcher wants to face, but it’s going to be especially daunting for a guy that can occasionally get lit up.

Keep an eye on Aaron Judge and Giancarlo Stanton here. Both have raked against righties all season long, and both of them homered on Thursday — with Stanton actually homering twice.

New York also happens to be throwing one of the best pitchers in the game on the mound, and Cole couldn’t possibly be pitching better right now. He should be able to go out there and shut down a Chicago offense that has scored the fourth-fewest runs in all of baseball.

These two teams combined to score 22 runs in their meeting on Thursday, and they can’t be expected to do that every game in this series. New York really should be able to put up a good number on the scoreboard against Velasquez, but as long as it doesn’t get way out of control then this one should go Under the total.

The White Sox have one of the worst offenses in baseball this year, and Cole is on fire coming into this game — he should be able to go out there and handle his business, and the Yankees happen to have the second-best bullpen ERA in baseball.

The Yankees are 16-2 in their last 18 games and their offense has been a huge reason for that. New York has scored at least five runs in 11 of its last 18 games, and it’s a little hard to see the Yankees not reaching that number again here.

Velasquez has pitched well in the two games leading up to this one, but he is certainly prone to duds every now and then. In fact, Velasquez had five starts last year in which he gave up at least five runs on his own, and he has already done it once this season.

If Velasquez is having trouble locating the strike zone, this game could get out of hand pretty early. He can definitely issue a few too many walks, and that would make it easy on New York to hit this Over with a few swings of the bat. 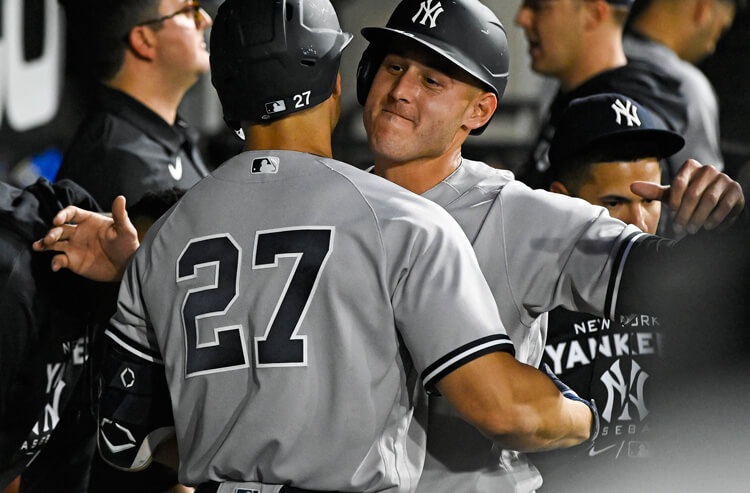