Phillies vs Dodgers Picks and Predictions: Solid Starters Give Way to Late Scoring

L.A. is stumbling while Philadelphia is streaking, but Clayton Kershaw on the mound will be tough to keep the momentum going against. There's also punch at the plate to worry about, and we're backing high scoring with tonight's Phillies vs. Dodgers picks.

The Philadelphia Phillies will visit the Los Angeles Dodgers for the second contest in a four-game series this Friday night.

The Phillies have won three of their last four games, including the Thursday series opener, and send a reliable veteran in Kyle Gibson to the mound here. The Dodgers still cling to the top spot in the NL West even after losing three of their last four, and they’ll tab former three-time Cy Young winner Clayton Kershaw to counter.

Will the Dodgers reward the chalk-players in this spot? Find out in our free MLB picks and predictions for Phillies vs Dodgers on Friday, May 13.

The Dodgers opened as consensus -213 favorites on the moneyline, and that number has been bet down to as far as -230 at multiple sportsbooks. The total was unveiled at 7.5, but most sites have moved it to 8.0 with action coming in on the Over.

Kyle Gibson (3-1, 2.94 ERA): Gibson is fresh off his third quality start of the season in six chances, as he held the Mets to two runs over six frames on Sunday. He’s currently on pace to produce his best career WHIP (1.069).

Clayton Kershaw (4-0, 1.80 ERA): Kershaw has uncorked one vintage performance after another this season, including his seven innings of shutout work against the Cubs last Saturday. “The Claw” has struck out 32 batters while walking only three in his first 30 innings on the mound in 2022.

The Phillies are 5-14 in their last 19 meetings with the Dodgers in Los Angeles. Find more MLB betting trends for Phillies vs. Dodgers

Phillies vs Dodgers picks and predictions

The Phillies managed to beat the Dodgers 9-7 on Thursday, but L.A. is capable of counterpunching on Friday night.

Kyle Gibson sports some subpar road splits for the Phillies this year, as he’s produced a 4.20 ERA over three outings, compared to a 1.93 ERA in three starts at Citizens Bank Park. It’s just a continuation of his road struggles from 2021, as Gibson authored a 4.47 ERA as the visitor last year (17 starts), compared to a 2.81 ERA in his own ballpark (13 starts, one relief appearance).

Bettors should expect Mookie Betts to lead the charge for the Dodgers, as he’s 8-for-20 (.400) lifetime against Gibson with three homers and seven RBI.

Clayton Kershaw will likely outduel Gibson on the mound, as he’s picked up the win in four of his first five starts of 2022. In addition to his incredible 10.67 strikeout-walk ratio to begin the campaign, Kershaw also sports a 0.733 WHIP, good for second in the majors behind only Justin Verlander (0.639).

The Dodgers have owned the more reliable bullpen for much of the season, as their 3.03 ERA ranks fifth in baseball. By contrast, the Phillies’ relief corps is 25th with a 4.29 ERA.

Thursday’s series opener was a slugfest, and we’re calling for more offensive fireworks at Chavez Ravine on Friday night.

We already mentioned that we anticipate Betts to have a big game at the dish, and accompanying him could be Trea Turner and Freddie Freeman. Turner is batting .321 over the last week, including his three-hit game with a walk against the Phillies on Thursday night. Freeman has yet to hit a home run in May, but nevertheless carries a .974 OPS through 36 at-bats with only five strikeouts.

The Dodgers offense may have to deal with Jeurys Familia (seven straight scoreless outings) out of the Philadelphia bullpen, but key cogs Jose Alvarado, Seranthony Dominguez, and Corey Knebel all figure to be off-limits having worked two straight days. That means manager Joe Girardi will have to rely on the back of a bullpen that’s pitched to a 4.50 ERA over the last two weeks.

Meanwhile, as great as Kershaw has looked in 2022, this Phillies lineup is no pushover. It’s seventh in runs per game (4.63), and fifth in OPS against lefties (.751) this season. Rhys Hoskins and Kyle Schwarber are a combined 7-for-14 (.500) all-time against Kershaw with two homers and four RBI. The former is gathering steam over the last week, batting .364 with three longballs and seven driven in.

Philadelphia also boasts reigning NL MVP Bryce Harper at DH, who continues to produce at the plate (.881 OPS) despite a lingering elbow issue.

The Dodgers’ relief corps had a rock-solid beginning to the year, but enters this tilt with a 4.28 ERA over the last two weeks. The Phillies will be in trouble if down late and either Alex Vesia or Craig Kimbrel enter, but if they can chase Kershaw fairly early, they can attack the soft underbelly of the L.A. bullpen.

Dodger Stadium is a notorious pitchers’ park, but Over bettors should not be dissuaded in this spot.

The Dodgers’ top-ranked offense by runs per game (5.20) should get to Gibson early and force a mediocre Phillies bullpen to do some serious heavy-lifting on Friday night. Kershaw will likely still record a quality start against the Phillies’ third-ranked lineup by OPS (.736), but it’s hard to envision him escaping entirely unscathed. The Dodgers’ relievers have had some recent hiccups, something the Phillies can take advantage of in the right situation.

Over bettors should pounce on the 7.5 total before it evaporates entirely. 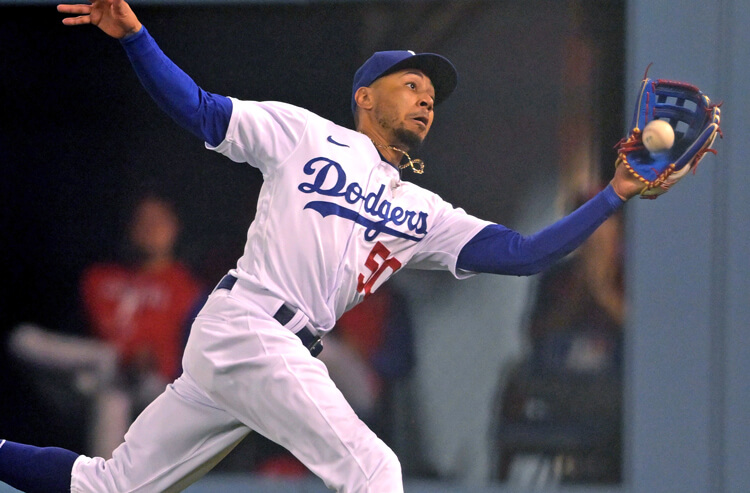 Phillies vs Dodgers Picks and Predictions: Solid Starters Give Way to Late Scoring
Provided by