Yankees vs Mets Picks and Predictions: Big Apple Bats Will Be Working On SNB

After splitting the first two games of the Subway Series, Sunday night's rubber match features a lackluster pitching matchup, giving both of these subpar offenses a chance to cash the Over. But who does our MLB betting picks like to win the game?

The New York Yankees and New York Mets wrap up the Subway Series on Sunday night. The pair of Big Apple squads split the first two games of this series at Citi Field.

Despite the Yankees taking their sweet time to announce a starting pitcher for this one, select books have released MLB betting lines with this game opening at close to a pick'em with an Over/Under of 8.

Here are our best free Yankees vs. Mets picks and predictions for Sunday, September 12, with the first pitch scheduled for 8:08 p.m. ET.

Clarke Schmidt (0-0, -.-- ERA): The Yankees waited to announce a starter but reports indicate that it will be prospect Clarke Schmidt getting the nod for Sunda Night Baseball. The 25-year-old Schmidt is still one of New York's top arms in the farm system but has battled through injuries, although he looked solid at Triple-A Scranton recently, allowing three runs and fanning 11 batters across 8 2-3 innings in his last two starts.

Carlos Carrasco (1-2, 5.88 ERA): The veteran right-hander put together some strong seasons in Cleveland but has struggled in his first year with the Mets. After starting the year off on the IL with a hamstring injury, Carrasco made his Mets debut at the end of July and has pitched to a 1.28 WHIP with an opponent batting average of .266 through eight starts.

Yankees: Jonathan Loaisiga RP (Out), Miguel Andujar 3B (Out), Aaron Hicks OF (Out).
Mets: Brandon Nimmo OF (Out), Robert Gsellman RP (Out), Tomas Nido C (Out).
Find our latest MLB injury reports.

The Yankees are 1-7 in their last 8 overall. Find more MLB betting trends for Yankees vs. Mets.

The Yankees have had a roller-coaster season but are still in the thick of the postseason race as they are tied with the Blue Jays for the final Wild Card spot, one game behind the Red Sox and two ahead of the A's and Mariners. The Yankees were hovering around .500 just after the All-Star break, went on a sizzling 13 game win streak in August to jump back into the playoff picture but have since gone 3-11 in their last 14 games.

After winning on July 31, the Mets had a four-game lead in the NL East but have since gone 15-24 to fall five games behind Atlanta. They will need to turn up their play down the stretch if they want to catch up to the Braves — and the Philadelphia Phillies.

Despite a loaded lineup, the Yankees have struggled to generate runs this season, ranking 20th in the majors with 4.32 runs per game. While it looked like they had managed to turn the corner during their winning streak they have gone cold at the plate yet again, ranking just 26th in the majors with an OPS of .661 over the last 15 days.

The Mets have been one of baseball's worst hitting teams all season but have been much better lately, ranking third in the majors with an OPS of .837 and plating 6.23 runs per game over the last 15 days.

It's tough to trust Carlos Carrasco given his form this year but at least he has a solid career resume and has been effective in his last three starts, allowing six earned runs and 14 hits while walking two batters across 17 1-3 innings.

The Yankees will go with unproven prospect Clarke Schmidt as their starter and while he shows promise he's been topping out at around four innings in Triple-A and it's tough to back somebody so green... Especially with the pathetic run support New York has been providing lately.

Take the Mets on the moneyline.

We mentioned that we don't really trust the pitching options for either team and while we gave the slightest of edges to Carrasco, his velocity was unimpressive in his last outing and he allowed a 50 percent hard contact rate. That's not good news as he goes up against a Yankees lineup that, at least on paper, is loaded with powerful sluggers that can make him pay.

The Mets offense has really come alive lately and trade deadline acquisition Javier Baez has led the way. The slugger is batting .415 with an OPS of 1.283 during the month of September and the Mets are plating 6.27 runs per game over that span.

That could make things tough for Schmidt who made three appearances for the Yankees in 2020 and was dinged for five earned runs in 6 1-3 innings.

With the Over going 6-1-1 in the last eight meetings between these teams and the Mets going 4-1-1 O/U in their last six games at home, take the Over tonight. 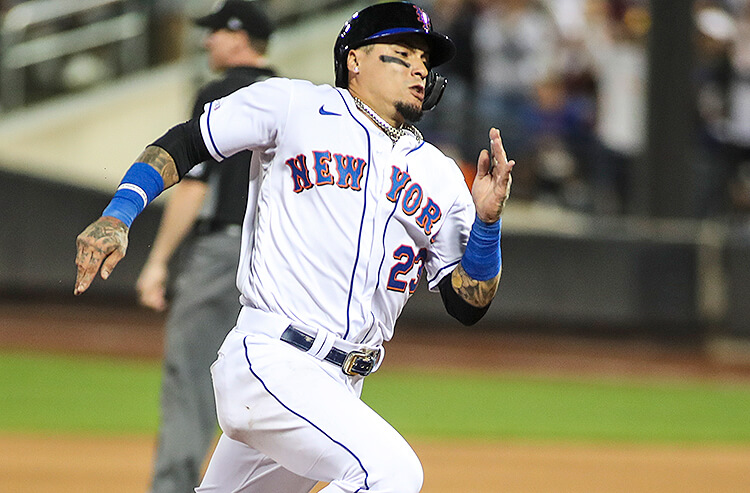 Yankees vs Mets Picks and Predictions: Big Apple Bats Will Be Working On SNB
Provided by