The AL East rivals begin a three-game set at Sahlen Field featuring a pair of strong lefties in Hyun Jin Ryu and Jordan Montgomery. Who has the edge for the series opener? Find out with our Yankees vs. Blue Jays betting picks and predictions.

The Toronto Blue Jays have had the New York Yankees' number this season, winning all three series they have played against the Bronx Bombers to this point.

The Yanks will try to take the first step in reversing that trend when they open a three-game set at the Blue Jays' home-away-from-home at Sahlen Field in Buffalo. But it won’t be easy as they’ll be slight underdogs against Toronto ace Hyun Jin Ryu.

Check out our MLB free picks and predictions for Yankees vs. Blue Jays on Tuesday, June 15, with first pitch scheduled for 7:07 p.m. ET.

Jordan Montgomery (3-1, 3.99 ERA): After an up-and-down start to the season Montgomery has become the Yankees' most reliable starter not named Gerrit Cole. The lefty is in the midst of a four-game stretch where he is pitching to a 2.66 ERA with a 1.14 WHIP while striking out 24 compared to just four walks.

Hyun Jin Ryu (5-4, 3.34 ERA): Ryu hasn’t been the sharpest over his last couple of starts having allowed nine earned runs on 12 hits over his 11 2-3 innings of work. But overall, the lefty has been solid, and his stuff is creating a lot of soft contact. Ryu has also had plenty of success against the Yankees earlier in the season.

It should be a beautiful night for baseball in Buffalo. The forecast is calling for partly cloudy skies with temperatures in the high 60s around first pitch. There will also be a 10-13 mile per hour wind blowing out to center field. Be sure to monitor the gametime conditions with our MLB weather info.

The Blue Jays are 5-2 in their last seven meetings against the Yankees. Find more MLB betting trends for Yankees vs. Blue Jays.

It looks like the date with the Minnesota Twins didn’t cure everything for the Yankees as they enter this series with the Blue Jays losers of three in a row and 11 of their last 15 overall.

The Yankees have had problems scoring runs early in the season but now their pitching staff is joining the poor-play party. New York is allowing 6.56 runs per game over its last nine contests and now goes up against one of the most dangerous lineups in the big leagues.

The Blue Jays, led by “best hitter on the planet right now” Vladimir Guerrero Jr., rank third in scoring, second in batting average and OPS, and first in home runs.

But the Jays enter this game having split a four-game set with the Red Sox and the case could be made they should have won three or even all four games in the series. Toronto's bullpen, however, continues to give games away.

Toronto is hopeful Ryu can pitch long enough into this contest so that the 'pen won’t have to be relied on too much. While Ryu is in a bit of a slump, he has allowed just two earned runs on eight hits while striking out 12 over 12 innings in two starts against the Yankees this season.

While New York's bats showed some life against the hapless Twins and a shaky Phillies bullpen, they still rank 28th in scoring and 18th in batting average. While both teams have issues, the Yanks have more right now, meaning the value is with the Jays as slight home faves.

The total for this AL East matchup opened at 8.5 and you should jump on the Under early if you can, and not just because the O/U is 2-7 in the first nine meetings between these teams this season.

While the Blue Jays are as potent as they come at the plate this season, Montgomery is pitching well right now and has done a decent job of keeping the ball in the park this season. He also did an OK job limiting the Jays to three runs on five hits over 4 2-3 innings in his lone start against them this year.

Yankees manager Aaron Boone also has the luxury of handing the ball to arguably the best bullpen in baseball. The Yankees relievers rank fourth in ERA, second in WHIP, and third in opponent batting average.

On the other side, we’ve talked about how Ryu should be able to limit the Yankee bats in this one. New York averages under four runs per game this season and the club has scored a combined five runs in its two games against Ryu. 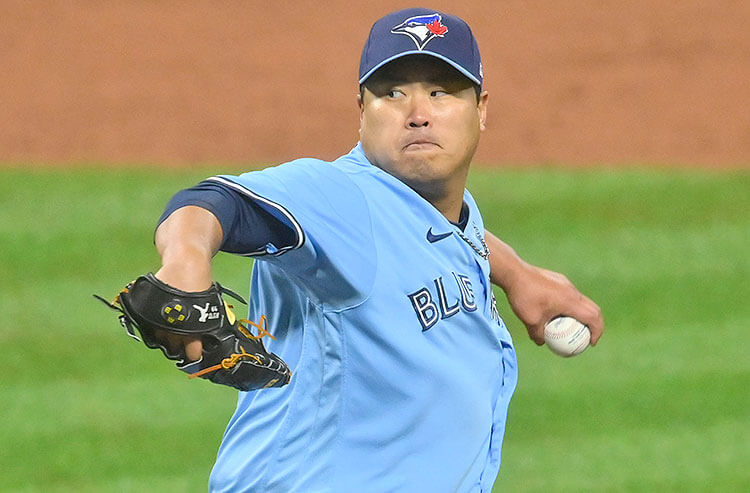 Yankees vs Blue Jays Picks and Predictions: Rivals Kick Off Duel With Southpaws
Provided by