Detroit Tigers righty Casey Mize has six-plus strikeouts in five straight starts and we like him to reach that number again tonight against KC. We're also staying on the Vladdy train. Check out all our MLB prop bet picks for Tuesday.

It's a fully loaded MLB schedule with 15 games on the board today. That means a seemingly unlimited supply of baseball prop bets to choose from.

We start by looking at a total bases prop for the best hitter on the planet right now and then there's nothing more fun than fading Matt Harvey when he takes the ball as the Baltimore Orioles continue their series in Cleveland.

We break down and pick these games and more with our best free MLB prop bets and predictions for Tuesday, June 15.

“The best hitter on the planet right now!”

That was the call after Vladimir Guerrero Jr. tied last night’s game with two outs in the bottom of the ninth, sending a ball into the night sky and out of Fenway Park. And it's not hyperbole.

Of course, the Blue Jays bullpen blew another game and wasted a great Vladdy Jr. performance. This means Toronto can’t be trusted until it fixes the problem, so we have to stay focused on Guerrero as the Blue Jays open a series against the New York Yankees on Tuesday in Buffalo.

Vladdy Jr. continues to look unstoppable at the dish and has now homered in four consecutive ball games and leads the majors with 22 for the season. He upped his batting average to .348 and his OPS to 1.148. It’s hard to believe, considering how good Guerrero’s been, that June has been his best month yet — he's hitting .454 with a 1.516 OPS.

Guerrero’s next victim is Yankees starter Jordan Montgomery. The lefty has been New York’s most reliable starter outside of Gerrit Cole, but his ERA is 5.52 on the road and opponents are hitting .274 off him.

It seems silly to be getting plus money on Guerrero’s total bases prop considering how locked in he is. So, we’ll keep riding this train until it stops cashing.

After a surprisingly solid start to the season for the O’s, Harvey is who we thought he was. The right-hander has allowed five or more runs in five of his last six starts, resulting in an ugly 14.19 ERA, 2.39 WHIP, while opponents are hitting .406 off him.

Cleveland doesn’t have a great lineup but is more than capable of taking advantage of Harvey. In fact, it ranks eighth in batting average against right-handers over the last 15 games.

Countering Harvey is Cal Quantrill. The 26-year-old right-hander has spent most of the season in the Cleveland bullpen and is making just his third start of the season.

His last one was a rough one against this same Orioles team, but Quantrill’s overall numbers are solid with a 3.21 ERA and a 1.37 WHIP. On top of that, the Orioles tend to leave their hitting shoes at home.

Baltimore scores just 3.52 runs per game away from Camden Yards and ranks 26th in batting average and 27th in OPS when hitting on the road this season. Cleveland is a good bet to have the lead through five innings in this one.

Besides literally looking like a discount version of Cole, Casey Mize is starting to look like a decent pitcher as well. He’ll look to stay hot when the Detroit Tigers visit the Kansas City Royals on Tuesday night.

Mize has been excellent over his last five starts, pitching to a 2.53 ERA and 0.81 WHIP while limiting opponents to a .180 batting average. On top of that, the right-hander’s strikeouts have shot up.

Mize was fanning just 6.29 batters per nine innings over his first seven starts but has upped his K/9 to 9.0 over his last five. He has also recorded at least six punchouts in all five of those games, including six Ks in 6 1-3 innings against this same Royals team back on May 23.

Getting plus money at a number this low is too good to pass up, even against a Royals lineup that doesn’t strike out a ton. 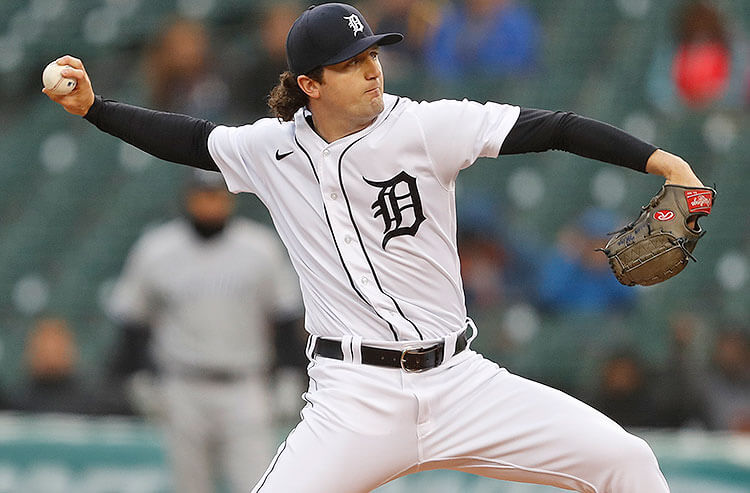 Today’s MLB Prop Bets, Picks and Predictions: Mize on the Rise
Provided by