Yankees vs Blue Jays Picks: Bet On the Under, Despite Struggling SPs

This latest series between the New York Yankees and the Toronto Blue Jays has been dominated by each team’s respective ace. Gerrit Cole led the Yankees to a victory in Game 1 while Hyun-jin Ryu took over last night.

So, what will the rubber match bring us when mortal men take the mound as Corey Kluber toes the rubber against T.J. Zeuch in the series finale—and where is the MLB betting value?

Check out our free MLB picks and predictions for Yankees vs. Blue Jays on Wednesday, April 14, with the first pitch scheduled for 1:07 p.m. ET.

Corey Kluber (0-1, 5.68 ERA): Kluber is still trying to find his groove after his first two starts in pinstripes. This should be expected, considering he hadn't pitched a full game since May 2019 prior to this season. So far this year, the former Cy Young Award winner has battled his command and his famous sinker has lost a lot of its bite, resulting in an ugly 2.37 WHIP.

T.J. Zeuch (0-1, 3.68 ERA): At 6-foot-7, Zeuch is an imposing figure on the mound. Now, he just needs his pitches to match his figure and he’ll be all set. Zeuch has been used as a piggy-back starter this season with the injuries to the Jays’ rotation and is coming off a rough outing against the Angels but scattered three hits across four shutout innings in a start against the Yankees on April 4.

The forecast in Dunedin is calling for clear skies and temperatures in the low-80s this afternoon. There will be a 10 mph wind coming in from right field as well. Be sure to monitor the gametime conditions with our MLB weather info.

The Under is 6-1 in the Yankees' last seven games with a total set between 9.0 and 10.5, while the Under is 5-0 in the Blue Jays' last five games as an underdog. Find more MLB betting trends for Yankees vs. Blue Jays.

The Yankees took Game 1 by a 3-1 margin, carried by a strong Gerrit Cole outing and a pair of Kyle Higashioka home runs. But the Blue Jays responded with a 7-3 win yesterday, thanks to another great performance from Ryu while the lineup was able to jump on Jameson Taillon. So, what can we expect in Game 3?

Well, this was supposed to be a pitching rematch of a game back on April 3—a game which the Yankees took 5-3. We say "supposed to" because the original starter was Ross Stripling, but he was scratched 90 minutes prior to first pitch. Back in that April 3 win, Kluber went four innings and gave up two runs on five hits and three walks.

The difference since that game is that the Jays don’t look as lost at the plate as the Yankees do recently. The not-so Bronx Bombers have scored three runs or fewer in four of their last six games and are hitting just .208 over the last week.

The Blue Jays’ offense, on the other hand, seems a little more boom-or-bust, but at least they have shown some boom at times. With the pitchers being a wash (not in a good way), the Jays show some decent value as a slight home underdog.

The total for this American League East matchup is in the double digits and that isn’t surprising when you consider the two starters in this game. But that still may be a little high.

While both starters have struggled early this season, they both play for teams with strong bullpens and have managers willing to pull the trigger early if things aren’t going well.

The Yankees arguably have the best bullpen in baseball and that’s still with Zack Britton on the IL. The New York relievers own a 1.84 ERA, 0.78 WHIP, and are limiting opponents to a very low .153 batting average.

The Jays aren’t too shabby in that department either, with a 2.53 ERA, a 1.25 WHIP, and a .219 opponent batting average. The bet here is the scoring will come early and then slow down late as two rested bullpens take over. Take 10.5 if you can, but buy the half-point to play it safe. 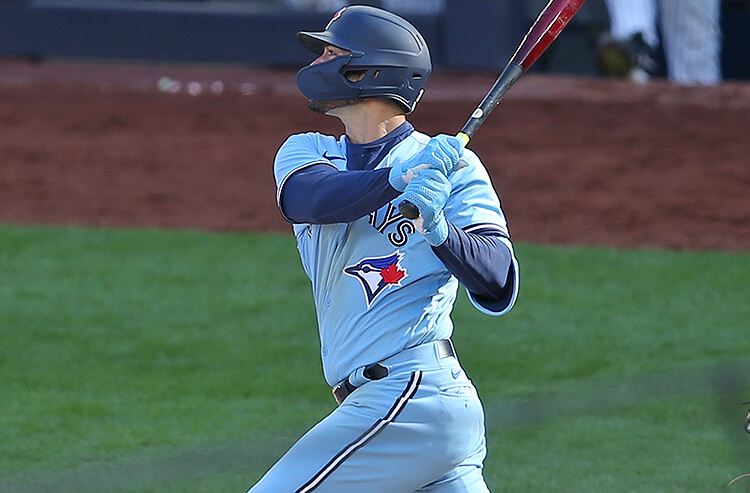 Yankees vs Blue Jays Picks: Bet On the Under, Despite Struggling SPs
Provided by