Yankees vs A's Picks and Predictions: Red-Hot Yanks Look to Make it 12 Straight vs Reeling A's

The Yankees are riding an 11-game win streak into a pivotal four-game series against the A's, who have lost eight of 10. Oakland's biggest problem has been offense — but we don't see them scoring much (or winning) Thursday night.

The New York Yankees are baseball's hottest team, riding an 11-game win streak that has propelled them to the first AL Wild Card spot.

They currently hold a 2.5-game lead over Boston and are four games clear of Oakland in that Wild Card race and will look to pad that lead when they visit the A's for a pivotal four-game series that kicks off Thursday night.

Oakland is stumbling at the wrong time, and MLB betting lines reflect that as the A's are a home underdog against the Bombers for the series opener.

Here are our best free MLB picks and predictions for Yankees vs. A's on Thursday, August 26, with first pitch set for 9:40 p.m. ET.

Jameson Taillon (8-4, 3.94 ERA): Taillon continues to churn out solid starts for the Yankees, with his last trip out against Minnesota — 5 1-3 innings, three runs — marking the 10th time in his last 11 games that he's pitched at least five innings and held opponents to three runs or fewer. This most recent outing was actually Taillon's second straight appearance giving up three runs, breaking a string of seven straight starts with two or fewer runs surrendered.

James Kaprielian (7-4, 3.25 ERA): The former Yankee top prospect is finally blossoming at age 27, posting a nice ERA along with a 1.17 WHIP in his first full Major League season. Kaprielian has been solid all season and his recent stretch has seen him give up two earned runs or fewer in five of his last seven starts. He mostly relies on a mid-90s fastball, mixing in a slider, changeup, and power sinker, and has been dynamite at home this season, posting a 1.47 ERA with 0.95 WHIP in seven starts.

Yankees: Brett Gardner OF (Day-to-Day), Gleyber Torres SS (Out), Zack Britton RP (Out), Miguel Andujar OF (Out), Clint Frazier OF (Out).
A's: Ramon Laureano OF (Out), Stephen Piscotty OF (Out), Trevor Rosenthal RP (Out).
Find our latest MLB injury reports.

The Under is 7-1-1 in the last nine head-to-head meetings. Find more MLB betting trends for Yankees vs. A's.

After sweeping both legs of a two-game set at Atlanta (and ending the Braves' nine-game winning streak), the Yankees fly cross-continent to take on Oakland having won 11 games in a row. This run is the longest victorious streak for the Yankees since 1985, and has pushed the Bombers to an astounding 19-4 in August — good for an .826 win percentage.

This Yankees surge — despite missing seemingly half of the roster at one point — has been powered by dynamite starting pitching and an offense that has finally come to life... by manufacturing runs.

Yes, they still hit home runs too, but New York has been generating multi-hit rallies, bunting, and even stealing bases — the Yankees have 36 stolen bases since July 1... after recording just 17 steals combined in the first three months of the year.

For as hot as the Yanks have been, Oakland has been equally, well, not hot. The A's have lost four straight and eight of their last 10, dropping from the first Wild Card spot to 2.5 games behind Boston for the final playoff spot (albeit they are also just two games back of Houston for the AL West lead).

What's been plaguing Oakland throughout this freefall? Scoring runs: the A's are averaging just 2.7 runs per game during this 10-game run, while hitting a paltry .212 as a team and posting a BAbip of .250 (fourth-worst in the Bigs over that span).

A plus for Oakland's is that it has won each of the last three starts made by James Kaprielian but considering the A's are going against reigning AL Pitcher of the Month Jameson Taillon, we're going to side with the road favorite Yanks to make it 12 wins in a row Thursday night.

As mentioned above: the A's are really struggling to hit, and facing Taillon — who has given up more than three earned runs in a start just once since mid-June — will likely not result in Oakland plating many runs tonight either.

On the flip side, the Yankees have scored five runs or fewer in seven straight non-Minnesota Twins games, so it's not like they are breaking scoreboards either at the moment. Plus Kaprielian has been effective lately and is especially dominant at home, surrendering just four total earned runs over his last four outings at RingCentral Coliseum (24 innings).

Speaking of the A's home park, it continues to be one of the more pitcher-friendly venues in the bigs, with the Under cashing in four of Oakland's last five home games (averaging just 6.6 total runs per game in that span).

The Under has also gone 6-1-2 in Oakland's last nine games, and that's the direction we're leaning towards tonight as well. 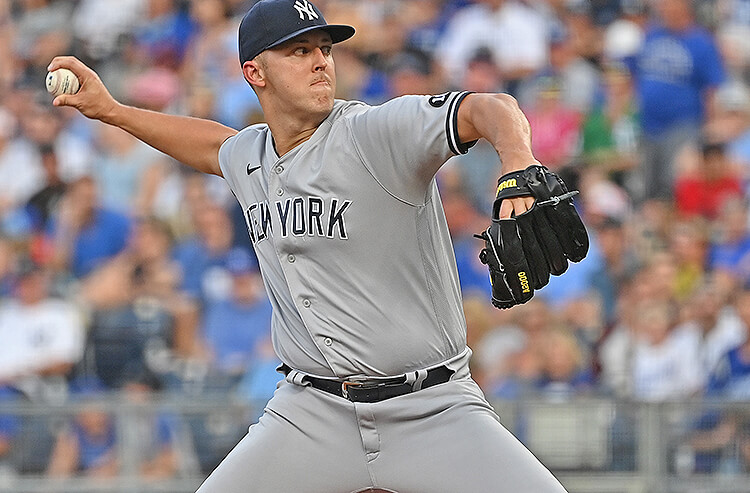 Yankees vs A's Picks and Predictions: Red-Hot Yanks Look to Make it 12 Straight vs Reeling A's
Provided by