Twins vs Yankees Picks and Predictions: Where the Wild Cards Are

Instead of relying on their bats, the Bronx Bombers have been getting contributions from the mound to bolster their playoff push. Will more of the same push them to a series-opening win today? Find out with our Twins vs. Yankees picks.

The Minnesota Twins head to the Big Apple on Thursday for a four-game set against the New York Yankees.

The Bronx Bombers have been on fire lately and the MLB betting lines reflect that, with the Yankees installed as massive -250 home favorites for the first game in this series.

Here are our best free Twins vs. Yankees picks and predictions for Thursday, August 19, with the first pitch scheduled for 7:05 p.m. ET.

John Gant (4-6, 3.49 ERA): With Michael Pineda on the 10-day IL, Gant will start his first game for the Twins since being acquired at the trade deadline. He has made seven appearances out of the bullpen with his new club, allowing eight hits and six runs (four earned) across 8 2-3 innings. Gant had previously pitched 76 1-3 innings as a member of the Cardinals this season, posting a 3.42 ERA and 1.57 WHIP as both a starter and reliever.

Jameson Taillon (7-4, 3.89 ERA): Taillon has been solid in his first season in New York pitching to a 1.22 WHIP with an opponent batting average of .243 through 23 starts. The 29-year-old is coming off a game against the White Sox where he scattered seven hits and three runs across five innings.

Twins: Willians Astudillo C (Questionable), Byron Buxton OF (Out), Alex Kirilloff OF (Out).
Yankees: Gio Urshela (Out), Miguel Andujar 3B (Out), Aroldis Chapman RP (Out), Gleyber Torres SS (Out), Aaron Hicks OF (Out).
Find our latest MLB injury reports.

The Twins are 4-11 in their last 15 games following a win. Find more MLB betting trends for Twins vs. Yankees.

Don't look now, but the New York Yankees are in the driver's seat in the AL Wild Card race despite sitting at .500 just a month and a half ago. New York has won 23 of its last 31 games, and with a record of 69-52, is within striking distance of Tampa Bay for the AL East title and pennant.

The Twins have won four of their last five, but with an overall record of 54-67, are well outside of the playoff picture.

The Twins have been solid at the plate this season, ranking 10th in the majors with an OPS of .745. That said, they've really missed Byron Buxton, who was on pace for an MVP-caliber season before suffering a broken hand, and the pitching situation in Minnesota has been a bit of a mess.

Today, Minnesota sends newly-acquired John Gant to the rubber. Gant has only appeared out of the bullpen for Minnesota but pitched to a 3.76 ERA in 14 starts for St. Louis earlier this season. While that ERA looks decent on the surface, Gant's WHIP of 1.53 and xERA of 5.52 on the year suggests that he's had a bit of good luck.

With Gant making an appearance as a reliever just three days ago, don't expect him to log many innings tonight, which means he'll likely soon make way for a Minnesota bullpen that ranks just 24th in the majors with a collective ERA of 4.72.

The Yankees haven't impressed at the dish this season, ranking just 16th in the majors with an OPS of .722. That said, they've bumped that number up to .769 over their last 15 games and added more pop to their lineup at the deadline by trading for Anthony Rizzo and Joey Gallo.

Jameson Taillon will get the ball for New York and he has looked very sharp lately, pitching to a 1.68 ERA with a 1.04 WHIP in eight starts since the beginning of July. More importantly for bettors, the Yankees won seven of those eight starts by at least two runs. Matter of fact, seven of New York's last eight victories overall have been by multiple runs. Grab the red-hot Yankees on the runline.

As well as the Yankees have been playing lately, they haven't exactly been lighting up the scoreboard, plating 4.52 runs per game over the last 30 days.

Meanwhile, the Twins average a modest 4.63 runs per game on the year and they could have trouble against Taillon. Not only has the fireballer been lights-out lately but he's had success at home all season, pitching to a 3.22 ERA with an OBA of .218 in 12 starts at Yankee Stadium.

The Yankees have been the best Under bet in the majors all season and have gone below the total in seven of their previous eight contests at home. With the Twins going 2-5 O/U in their last five games overall the current total of 10.5 looks a tad too high for us. 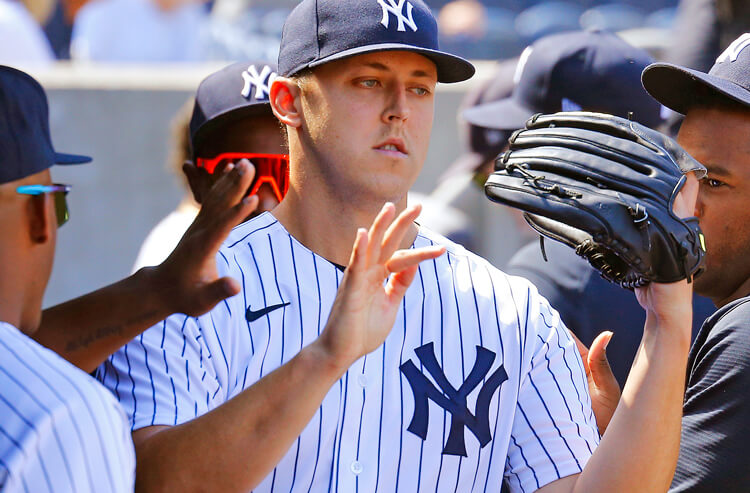 Twins vs Yankees Picks and Predictions: Where the Wild Cards Are
Provided by