Milwaukee is a heavy -200 betting favorite Thursday as it goes for a three-game sweep over St. Louis behind co-ace Brandon Woodruff. Check our Brewers vs. Cardinals picks and predictions to find out why we like the Brew Crew on the runline.

The Milwaukee Brewers are going for their fifth win in a row when they visit the St. Louis Cardinals on Thursday to wrap up a three-game set at Busch Stadium.

Milwaukee, which holds a massive 9.5-game lead in the NL Central, will send co-ace Brandon Woodruff to the mound as a heavy betting favorite for the series finale. St. Louis counters with Jon Lester, who has been rocked in two of his three starts since joining the Cardinals.

Find out who we like with our free MLB picks and predictions for Brewers vs. Cardinals on August 19.

Brandon Woodruff (7-6, 2.18 ERA): The electric 6-foot-4 righty is coming off his shortest stint of the season after going three innings in a 17-4 rout of the Cubs, but he surrendered one run in the outing, marking the 21st time in 23 starts that he hasn't allowed more than three runs. He has been one of the most consistent starters in baseball and takes a 0.90 WHIP into tonight's showdown, which is the second-best mark among starters.

Jon Lester (4-6, 5.32 ERA): The lefty hasn't pitched any better since the Cards acquired him from the Nationals at the trade deadline. In fact, he's been worse. Though he's coming off a one-run performance against the last-place Royals, Lester surrendered six runs in his first start with St. Louis and then five in the following one. He has allowed 22 hits over 16 innings since joining his new team while walking six and striking out eight.

Brewers: Daniel Vogelbach 1B (Out), John Curtiss RP (Out).
Cardinals: Dylan Carlson OF (Out).
Find our latest MLB injury reports.

Milwaukee is 5-2 in the last seven meetings versus St. Louis. Find more MLB betting trends for Brewers vs. Cardinals.

The Cardinals entered this series having won eight of nine games before dropping two straight to the Brewers. The good news is that seven of their next nine games come against the Pittsburgh Pirates, whom they swept last week, with a two-game set versus a below-.500 Detroit Tigers team sandwiched in.

The bad news is that before they get to that soft stretch, they have to go through Woodruff on Thursday night.

Woodruff has been dynamite this season, ranking Top 5 among starters in ERA, FIP, and FanGraphs' WAR, putting him firmly in the Cy Young mix. He enters tonight's start at +440 odds to win the award, behind only three pitchers, including teammate Corbin Burnes.

The righty dominated the Cards in his lone start against them back in May, throwing 7 2-3 innings of one-run ball with 10 strikeouts. Against a below-average hitting Cardinals team that has a .690 OPS and 88 wRC+ against right-handers, we're expecting Woodruff to guide the Brew Crew to a W tonight. And he should have plenty of support if he encounters any troubles, with Milwaukee's lineup likely to tee off on Lester, who is sporting the highest ERA and walk rate of his career, and worst WHIP since his rookie season.

The Brewers have won each of the first two games of this series by two runs and now have arguably their best arm on the mound as they look to complete the sweep. As massive favorites, we're not going to touch them at their -200 price tag but we're also not going to get cute and back the Cardinals behind Lester in a game St. Louis has no business winning.

Take the Brew Crew on the runline.

We expect the Brewers, and really any team, to punish Lester, who has allowed five runs or more in six of his last nine starts. To make matters worse for him, Milwaukee has been hitting lefties just about as well as any team in baseball over the last month.

The Brewers are first in average (.273), fourth in slugging (.470), and fourth in OPS (.805) over that stretch, while striking out fewer times than any team in the NL. Against a pitcher like Lester, whose swing-and-miss ability has dwindled to a career-low 5.8 K/9 rate, expect plenty of hard contact for as long as he's on the mound.

But Woodruff, who has allowed three runs or fewer in eight of his last nine trips to the mound, nor the Brewers bullpen (No. 2 in baseball with a 2.90 ERA over the last 30 days) are likely to feel much pressure at the pitcher-friendly Busch Stadium, and we're not confident that St. Louis' bats can do enough to push this past the O/U total of 8.

The Under is 6-2 in the last eight meetings in St. Louis, where offense goes to die. 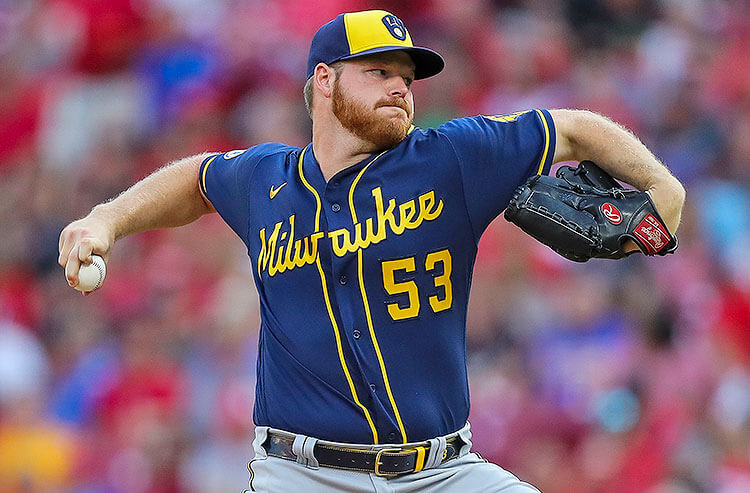 Brewers vs Cardinals Picks and Predictions: Brew Crew Cruise to Sweep
Provided by