Behind Blake Snell on the mound and a red-hot Jurickson Profar at the plate, the Padres look primed to take the series finale against the visiting Rockies. Read more in our MLB betting picks and predictions below.

The Colorado Rockies and the San Diego Padres will wrap up their four-game series at PETCO Park on Sunday afternoon.

The Rockies took the second game of a rare doubleheader in San Diego on Saturday, assuring they won’t be swept in this series. The loss halted a four-game winning streak for the Padres.

How will this NL West series resolve? Find out in our free MLB picks and predictions for Rockies vs Padres on Sunday, June 12.

The Padres opened as consensus favorites of -173, and bettors eagerly knocked that number down. The bookmakers have moved San Diego to as high as -200 as of Sunday morning.

The total was released at 8.5, a number that quickly vanished. Most sites are now at 8, with some even going down to 7.5.

German Marquez (2-5, 6.49 ERA): German Marquez picked up only his second win of the season against the Giants on Tuesday, but it didn’t come easy. He allowed three earned runs on four hits and a season-high four walks over six innings of work. This will be his first start of 2022 against the Padres.

Blake Snell (0-3, 5.68 ERA): Blake Snell has made four starts for San Diego this season, and all of them have led to losses. Though he’s kept the hits (15) down to a minimum through 19 innings, he’s issued 11 free passes in that span.

The Rockies are 9-21 in their last 30 games against NL West opponents. Find more MLB betting trends for Rockies vs. Padres

Rockies vs Padres picks and predictions

The Padres should reward chalk players as they close out their series with the Rockies this Sunday. San Diego has won seven of its last nine games, with its offense averaging 6.11 runs in that sample.

Jake Cronenworth has had plenty to do with that, going 11-for-33 (.333) with three homers and 17 RBI in that span. German Marquez will certainly want to pitch carefully to Cronenworth, who’s 4-for-11 (.364) with a pair of round-trippers against him all-time.

Very little has come easy for Marquez this year, as he’s allowed at least three earned runs in all but one of his 11 starts. He has a 6.23 ERA over four road outings in 2022. If the Friars can chase him early, their lineup will get to attack the underbelly of a Colorado bullpen that’s authored the second-worst ERA (5.00) in the majors this year.

Blake Snell has struggled to begin 2022, but this game could serve as a confidence-booster for the former AL Cy Young winner, as the Rockies are third-worst in baseball in runs per game on the road (3.00) this year. Snell has been beset with control issues (11 walks through 19 innings), but Colorado is a modest 18th in walks drawn. C.J. Cron has shockingly drawn just four walks in 111 at-bats on the road this season.

Behind Snell is a solid San Diego bullpen that’s produced a 3.58 ERA this year, good for 10th in the majors.

Despite two underachieving starters taking the hill at PETCO Park on Sunday, the Under still looks like the proper play for total bettors.

There’s a silver lining to Marquez’s year for Colorado, and it’s his ability to pitch fairly deep into games in spite of getting himself into trouble. He’s lasted six innings in five of his last six outings, authoring three quality starts in that span. Two of those appearances occurred away from Coors Field.

Rockies manager Bud Black has three serviceable options in his bullpen behind Marquez on Sunday, starting with closer Daniel Bard (2.22 ERA), who’s earned 12 saves from 14 chances. Tyler Kinley (0.75 ERA) hasn’t worked since Wednesday but picked up his team-leading 10th hold on Tuesday. Lucas Gilbreath has allowed only one earned run over his last 12 efforts.

The Padres have also saved some of their best bullpen arms for the series finale, starting with closer Taylor Rogers (18 saves), who worked a clean inning against Colorado on Saturday. Luis Garcia (nine holds) is similarly rested for manager Bob Melvin.

The Friars are 17-8-1 to the Under in their last 26 home games, and PETCO Park is notorious for being a pitcher’s paradise.

If you’re searching for a way to juice up a parlay involving the Padres moneyline, then banking on San Diego left fielder Jurickson Profar to get a hit seems wise.

Profar’s .252 batting average for the year belies how dialed-in he is at the plate right now. He has 14 hits over his last 36 at-bats (.389), including a homer and 10 RBI. Profar has a hit in every game of this series thus far.

The Curacao native has done well in limited at-bats against Marquez, going 3-for-6 with an RBI and a walk. Profar also has a pair of hits against Bard in six prior at-bats. 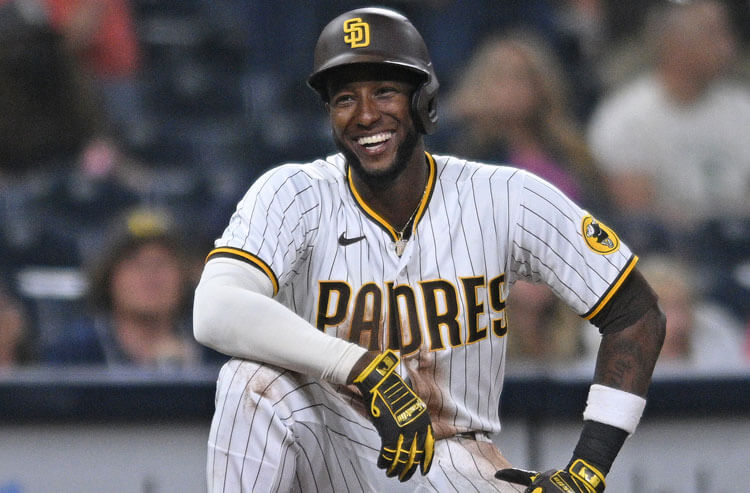 Rockies vs Padres Picks and Predictions: Profar, Padres Cruise Past Rockies
Provided by