Despite the strength of the Los Angeles Dodgers' batting lineup, it's not at its best against southpaws. That opens the door for San Fran's Carlos Rodon to take advantage — potentially stealing another game against the division-leading Dodgers.

The San Francisco Giants surprisingly have a chance to sweep the Los Angeles Dodgers by earning a win on Sunday, which has to have the Giants feeling good after having lost five of its previous eight games heading into this series.

Will San Francisco finish Los Angeles off and move to seven games over .500? You’ll want to continue reading our Dodgers vs. Giants MLB picks and predictions to find out.

The total in this game opened at 8 and is still hanging around that number on most sportsbooks. However, there is one that is offering it at 8.5 right now, which presents an opportunity for anybody that wants to take the Under.

Julio Urias (3-5, 2.78 ERA): Urias is coming off a start in which he gave up only one run in 5 1-3 innings against the New York Mets, and he has now given up one or fewer in three of his last four outings. Urias has always had super impressive stuff, and he is now really coming into his own in Los Angeles. Urias is in the midst of a third year in the last four in which he has had a sub-3.00 ERA. Los Angeles will be counting on him in this big spot.

Carlos Rodon (4-4, 3.51 ERA): Rodon was unbelievable to start the season for the Giants, but hitters have since figured him out a bit. The lefty has also pitched just nine innings over his last two outings and San Francisco will need him to work deeper into games than this moving forward. The good news for the Giants is that Rodon gave up just two earned runs over six innings in his first start against the Dodgers this year.

Dodgers: Edwin Rios 3B (Out), Kevin Pillar OF (Out), Max Muncy DH (Out), Blake Treinen P (Out), Tommy Kahnle P (Out), Victor Gonzalez P (Out), Clayton Kershaw P (Out), Andrew Heaney P (Out), Trevor Bauer P (Out).
Giants: Brandon Belt 1B (Out), Austin Slater OF (Out), LaMonte Wade Jr. OF (Out), Steven Duggar OF (Out), Anthony DeSclafani P (Out).
Find our latest MLB injury reports.

The Giants are 52-24 in their last 76 games against NL West opponents. Find more MLB betting trends for Dodgers vs. Giants

The Giants are generally better against right-handed pitching, but they happen to be 4-1 in their last five games against left-handed starters.

San Francisco is also sending Rodon to the mound, and the lefty has been excellent when pitching in The Bay this season. In 27 innings at home, Rodon has a 2.67 ERA and has struck out 44 batters.

Rodon also happens to have a 2.45 ERA in two afternoon starts this year, and it doesn’t hurt that Los Angeles has scored only four runs in the last two games. This is as good an opportunity as you can get against this otherwise dominant Dodgers lineup.

Overall, Rodon should be able to keep the damage to a minimum in this game, especially at Oracle Park. Meanwhile, the Giants could similarly struggle in a meeting with Urias, who has been excellent all year.

However, San Francisco is feeling confident coming into this game, and the team has the homefield advantage. With that in mind, it’s hard not to roll the dice on the Giants as home underdogs.

The Dodgers have one of the best lineups in baseball this year, which is why they’re at the top of the league in runs scored in 2022.

Considering this is normally a team that ranks near the top of the league in most advanced stats, that should give you a good idea of what this club is like against southpaws.

With all of that in mind, look for Rodon to go out there and turn in a solid performance against the Dodgers — even if it ends up being a game in which Los Angeles ends up winning. The Dodgers should also get a good performance out of Urias, who threw six scoreless innings against the Giants on May 3.

The Under is also 5-1-1 in Los Angeles’ last seven road games, and it’s just hard to see this one being a high-scoring affair.

Rodon has racked up at least six strikeouts in seven of his 11 starts this season, and he’s due for a good performance after only pitching four innings in a loss to the Colorado Rockies.

Rodon also happened to have only three strikeouts in a game in which he gave up two earned in six innings against this Dodgers team on May 3. With that said, he’s definitely due for some more strikeouts, as he has some of the best swing-and-miss stuff in the league.

As discussed, the Dodgers aren't at their best against lefties, so these bats aren't going to be as live today. Rodon has been much better when pitching at Oracle Park this year, as he has a 2.67 ERA in five home starts. He also has 44 strikeouts in 27 innings in those outings. 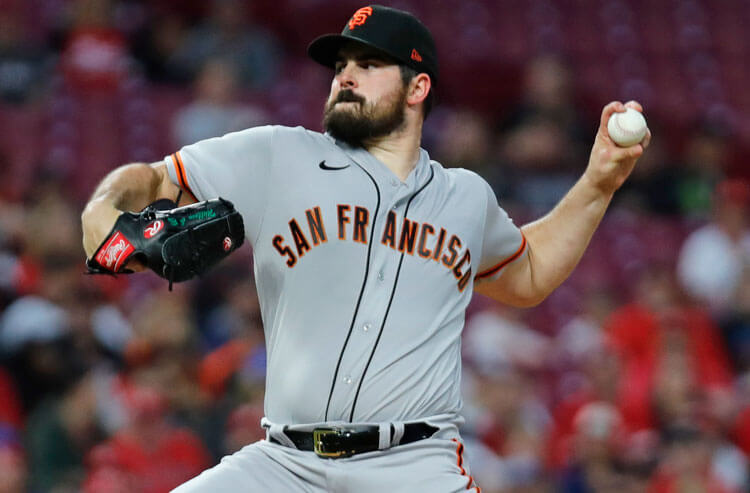