Wednesday will already mark the sixth time the Los Angeles Dodgers and Colorado Rockies have met this season. Unsurprisingly, it's been a one-sided affair.

The defending World Series champs lost to Colorado on Opening Day but have won each of the past four contests, including blanking the Rockies 7-0 in Tuesday's series opener behind another gem from Trevor Bauer.

Here are our best free MLB betting picks and predictions for Rockies vs. Dodgers on April 14, with first pitch at Dodger Stadium scheduled for 10:10 p.m. ET.

Jon Gray (1-0, 1.54 ERA): Gray will probably never realize his full potential, certainly not pitching his home games at Coors Field, but he's off to a good start. The righty has a 1.54 ERA through two starts, including one against the Dodgers, allowing one run in each of those outings while striking out a total of 12 batters over 11 2-3 innings. He walked four in his last start but struck out seven and worked into the seventh inning in a Rockies win over Arizona. Gray is a former first-round pick who entered the bigs with massive upside and has delivered on some of that but has never been able to become a front-of-the-rotation arm. He has strikeout stuff but runs into a matchup that's about as difficult as it gets.

Dustin May (1-0, 0.00 ERA): The electric 23-year-old beat out Tony Gonsolin and veteran David Price to earn the No. 5 spot in the Dodgers' rotation and he didn't disappoint in his first start of the season. May threw six scoreless innings of two-hit ball against the Oakland A's, striking out eight in the victory. The eight punchouts matched a career high, but for a pitcher with stuff as good as May, it's only a matter of time before he records a double-digit strikeout performance. May is one of the hardest-throwing starters in baseball and is capable of touching 100 mph. His fastball averaged 98-plus mph in his first start, and he generates wicked movement on his two-seamer and breaking pitches. When he's on, he's the type of pitcher who attacks batters with no-hit stuff.

The Dodgers have won four straight against Colorado and three of the last four by two-plus runs. Find more MLB betting trends for Rockies vs. Dodgers.

The Dodgers have followed up their World Series-winning season with a sizzling 9-2 start. Their only other loss besides the Opening Day defeat to Colorado was an extra-inning loss to the A's and they've responded with four straight wins, including three shutouts.

They are about as dominant as a team can get, with a starting rotation that is capable of putting up zeros any night and a deep lineup that's led by one of the game's most complete players in Mookie Betts. That leads to blowout potential every time they take the field, and that's certainly in play tonight with May on the mound against one of the majors' worst offenses.

May would have been a rotation lock for any other team in baseball, but he wasn't named the fifth starter until right before the season because the Dodgers have an embarrassment of riches when it comes to their pitching. He has ace potential and although his strikeout rate has been a little light to start his career, the stuff is too good for it not to rise to a well-above league-average mark. May hasn't even thrown 100 innings in his major league career but throughout the minors showed great control and wasn't hurt much by the long ball (though he was last season over 12 appearances). That combination, with a strikeout rate that's expected to soar, will make him one of the game's most valuable arms in no time.

The Rockies are in rough shape. They've been shutout in each of their last two games and rank dead last in the majors away from home in weighted runs created plus, with a mark that's 63 percent below league average. Colorado's walk rate ranks 28th out of 30 teams, while the club has MLB's second-worst on-base percentage at .273.

Gray is capable enough that at +215 or better odds it wouldn't be crazy to talk yourself into taking the Rockies on the moneyline. But the Dodgers are simply the best team in the majors and May is a beast who should have his way with this putrid offense. The best bet is to take the Dodgers on the runline.

We know the Rockies are struggling at the plate but if you're trying to find positives with their pitching...you won't. Colorado's arms have the second-lowest strikeout rate in baseball, the highest walk rate, and sport a 4.64 ERA.

That's especially bad news against a Dodgers team that has the No. 1 offense in baseball (per wRC+ and OPS), the third-best hard-contact rate, the third-highest walk rate, and the third-lowest strikeout rate. That's the definition of a dynamic offense. Combine that with their pitching and it's easy to see why the Dodgers are going to be a tough team to beat no matter what you counter them with.

Their pitching has been so good that despite how strong the offense is (they trail only the Cincinnati Reds in runs scored) the Dodgers are 4-7 O/U on the season. On the flip side, the Rockies' offense has been so weak (scoring a total of four runs over their last four games), they, too, have struggled to hit Overs with consistency. Colorado is 3-8 O/U and has gone Under in six straight games.

We're banking on a little more offense tonight and for the Dodgers to do more damage against Gray than they did when they first saw him less than two weeks ago. 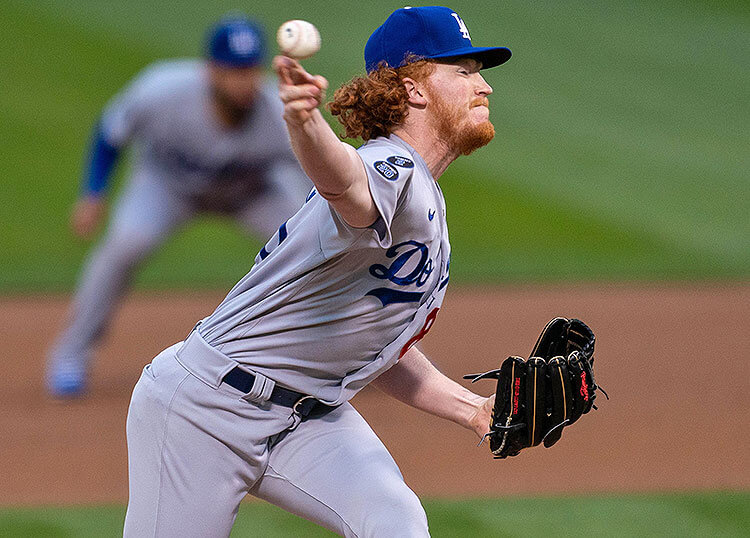 Rockies vs Dodgers Picks: Happy Dustin May Day
Provided by