Tampa Bay is amid a tough stretch of games but its struggles are nothing compared to those of Toronto starter Yusei Kikuchi. With the Blue Jays' slumping starter on the mound tonight, our MLB betting picks are looking at the Rays to punish him.

The Toronto Blue Jays were unable to pull off the sweep of the Boston Red Sox, falling 6-5 in extra innings last night, but they’ll have to put that behind them quickly as they welcome another American League East foe to town in the Tampa Bay Rays.

The Rays enter this game sputtering a bit but they’ll look to make up some ground on the Jays tonight when they face off against Yusei Kikuchi. With the way Kikuchi is pitching, is the Over a lock?

Find out in our free MLB betting picks and predictions for Rays vs. Blue Jays on Thursday, June 30.

The Blue Jays opened this AL East matchup as -125 favorites and even with Kikuchi on the bump it hasn't scared away bettors, moving the line to the -140 range. The total briefly hit the board at 8.5 before jumping as high as 9.5.

B) George Springer OR Alejandro Kirk to hit a home run BOOSTED to +300 at Betway! Claim Now

Yusei Kikuchi (2-4, 5.08 ERA): Kikuchi’s June was about as bad as it gets for a starting pitcher. The lefty is pitching to a whopping 9.39 ERA over five starts this month, never pitching more than 4 2-3 innings over that span, and completed just two innings or fewer twice.

Matt Wisler (2-2, 2.83 ERA): Wisler will serve as an opener for the Rays in this one, likely in front of a bulk starter. The right-hander had been having a great month of June, allowing just one run on three hits over 10 innings before getting tagged for three runs on four hits in a third of an inning last time out against the Brewers.

The Over is 9-3 in Kikuchi’s last 12 starts, including the last six in a row. Find more MLB betting trends for Rays vs. Blue Jays

The Blue Jays were unable to complete the sweep of the Red Sox last night but their offense is still rolling, plating 18 runs over the course of the three-game set and scoring at least five in each. Toronto has arguably had the best offense in baseball since the end of May.

Meanwhile, the Rays enter this game not playing their best baseball. Take away a three-game sweep of the lowly Pittsburgh Pirates, and the Rays have lost nine of their previous 12 ball games, but they get a big advantage in this game — facing off against Yusei Kikuchi.

Kikuchi is going through just a terrible stretch of games, never pitching more than five innings and surrendering 19 runs (16 earned) over just 15 1-3 innings in the month of June.

That stretch has made for some jaw-dropping numbers. Kikuchi ranks in the bottom 1% in MLB in expected ERA (6.75), average exit velocity, opponent expected slugging percentage, and barrel %. Not great, Bob!

Even though the Rays' offense isn’t much to write home about, they still do a respectable job when digging in against southpaws. They rank eighth in batting average and 17th in OPS when facing left-handed pitchers this season.

Even with a red-hot Jays’ lineup going against Wisler, Kevin Cash still has a strong bullpen at his disposal that ranks sixth in ERA and fifth in WHIP, which will keep them competitive in this matchup. The Rays also do a great job of limiting home runs, which is a large part of the Blue Jays’ production.

This means the value is with the Rays today, because while Kikuchi could find his good stuff again at some point, he’s a pitcher you’ve just got to fade at this point.

While we are leaning towards the Rays as underdogs, it wouldn’t be shocking to see the Jays pull this one out. That’s not the feeling we have about the total. Jump on the Over 9.5 and do it as quickly as possible before it gets much higher.

Kikuchi’s struggles have been talked about at length and the Rays should match or surpass their season average of 4.06 runs per game.

In the other dugout is a Blue Jays offense that has been lighting it up this month. Toronto ranks first in MLB in batting average, OPS, and wRC+ in June, plating a big 6.15 runs per game over the course of this month.

While the Rays once again have a solid bullpen, their relievers are dealing with several injuries and a few others who are not making the trip with the team to Toronto due to their vaccination status.

Combine Kikuchi’s struggles with a Jays lineup that has arguably been the best in baseball in the month of June, and you’ve got the perfect recipe for an Over — which has cashed in six straight Kikuchi starts. We’re betting it’s lucky number seven tonight.

None of those starts lasted five innings and included games against below-average hitting teams like the Royals and Orioles. He has also allowed 37 base runners in 15 1-3 inning of work over that span.

It feels like if the Jays, who rank sixth in MLB in first-five inning scoring, can muster anything in the first half of this game, it should go Over the first-five total with relative ease. 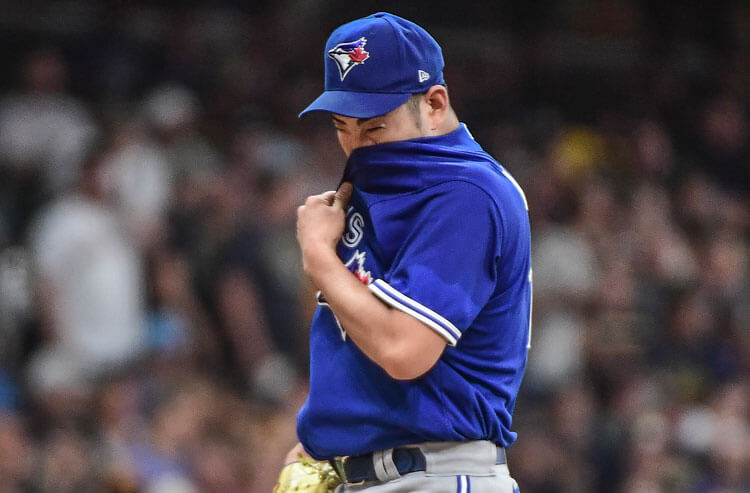