An excellent four-game set opens up at Dodger Stadium tonight, with San Diego and Los Angeles meeting for NL West supremacy. It'll be a tight matchup but our Padres vs. Dodgers MLB betting picks are counting on plenty of runs.

The Los Angeles Dodgers and San Diego Padres will kick off a four-game series with control of the division and NL up for grabs.

The Padres will send Joe Musgrove to the mound, who finally had his undefeated record snapped in his last outing, while the Dodgers answer with Mitch White. Who will strike first in this high-stakes NL West showdown?

Continue reading for our free MLB picks for Padres vs. Dodgers on Thursday, June 30.

The Dodgers opened as -120 favorites and have since moved further out to the -135 range at most books. The total opened at 8.0 and several books have moved to 7.5 with a juiced Over while others have held at 8.0 with a juiced Under.

Joe Musgrove (8-1, 2.12 ERA): Musgrove possessed a flawless 8-0 record and 1.59 ERA prior to his previous start, in which the Phillies finally showed that the 29-year-old righty is indeed human and put up six earned runs across six innings. Musgrove also struck out just one batter, his lowest mark since August of 2019.

Mitch White (1-1, 4.25 ERA): White has had just a handful of opportunities as a starter for the Dodgers, largely due to their abundance of starting pitching talent. In three seasons with the club, White has been called upon for just nine starts, but has also appeared in 22 other games in relief. He has managed a 3.74 ERA and 1.15 WHIP throughout his career, marks that are more than respectable and better than a lot of number two pitchers.

Since joining the club two offseasons ago, Musgrove has put together a 19-10 record and a 2.84 ERA. He started 2022 off with an 8-0 record and 1.59 ERA, but was touched up by the Phillies for six runs across six innings in his last outing.

The hope for the Padres is that Musgrove can bounce back from that performance in the opening game of their four-game set with the Dodgers, as they sit 1.5 games behind L.A. for both the lead in the NL West and the National League.

That may be a bit more difficult to achieve than some may expect by just glancing at Musgrove's stellar 2022 numbers. In 113 combined plate appearances against current-day Dodgers batters, Musgrove has allowed a .271 batting average and .408 slugging percentage.

Those hitters are seemingly more disciplined at the plate relative to the field, striking out just 15.8% of the time and walking 8.3% of the time compared to Musgrove's career marks of 26.4% and 6.2%, respectively.

That is particularly concerning that Musgrove struggled to punch out Phillies batters his last time out, logging just a single strikeout during his start, which was his lowest mark since August 2019. While the Phillies have a more than respectable offense (4.68 runs per game), the Dodgers are the best in the league (5.08).

Opposite of Musgrove will be Mitch White, who like many of the Dodgers' home-grown arms, has struggled to find starting opportunities in the opening years of his career due to the excess of quality talent the club has developed and acquired for quite some time now. The 27-year-old has instead served as a quality relief arm, with 24 relief appearances to his name compared to the nine games he has started.

In his most recent outing, he allowed three earned to the Braves in four innings of work, allowing five hits and two walks. Across his career White has pitched to a 4.95 ERA and 1.24 WHIP as a starter and a 2.72 ERA and 1.07 WHIP as a reliever, although an easy argument can be made that the extreme inconsistency that he is called upon to be a starter is disruptive to his ability to be a better one.

Between White's unfavorable splits and Musgrove's concerning track record against the Dodgers, the edges have to come from elsewhere. To that point, the Dodgers have the Padres rather handily.

Assuming both pitchers have equally moderate trouble, it stands to reason that the aforementioned top Dodgers offense (5.08 runs per game) will edge out the Padres (4.64 runs per game). And when it comes time for each team to lean on their bullpen, Los Angeles (3.29 ERA) has San Diego (3.48 ERA) beat out there as well.

Given our expectation that both starting pitchers will struggle tonight, it may be best to respect those Overs splits that apply to tonight's game at Dodger Stadium.

Weather-wise, there isn't anything that would deter a look at the Over, given that the temperature (70 degrees) and humidity (60%) are within range of the humidor standards for game ball storage (70 degrees, 50% humidity).

Expect both offenses to put on a show tonight.

Tonight's opening game between the Padres and Dodgers is easily the best game on the slate and eyes around the country (with this game being broadcast on FS1) will likely have a lot to feast on.

While both teams have faced their fair share of injury-related misfortunes, both have persevered rather impressively given where they currently stand in the National League (first and third, respectively).

The Padres have fought well on the road (25-15) but the Dodgers have defended home ground just as well (20-12). While many will take a simple glance at the starting pitcher matchup and give the Padres the edge, a proper dive into the numbers suggests a closer matchup than initially anticipated.

When that element of the game is leveled out, the Dodgers simply have too many edges outside of that — whether it be their league-leading offense or their superior collection of relief arms.

Expect the Dodgers to pull away in the opening game of this four-game series. 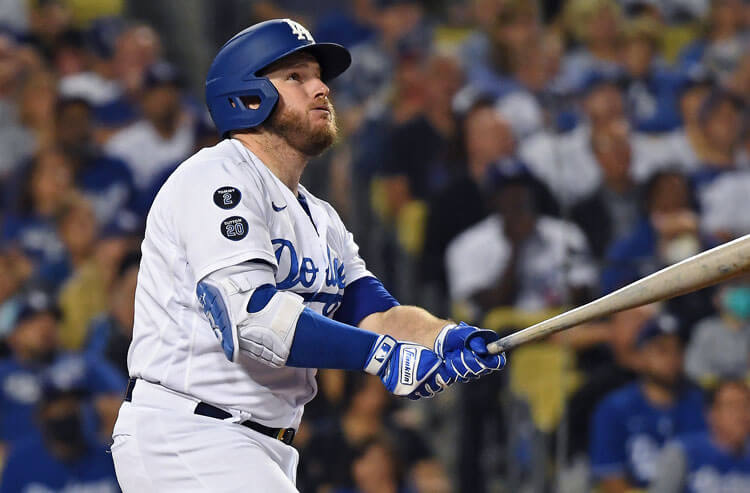