Astros vs Yankees Picks and Predictions: Box Office Series in the Bronx

New York is MLB's best team up to this point but it will get a great test this weekend, with a four-game set vs. AL-West leading Houston. In what should be an excellent clash, our MLB betting picks highlight the Yankees' edge vs. the Astros.

The New York Yankees have unequivocally been the best team in baseball this season, full stop. However, they’ll get a good test this weekend when they host the American League West-leading Houston Astros for a four-game set.

Game 1 of the series will see Framber Valdez toe the rubber against Jameson Taillon in a matchup that has the Bronx Bombers as slight home favorites. Do the Astros have some baseball betting value as a road underdog?

Find out in our free MLB betting picks and predictions for Astros vs. Yankees on Thursday, June 23.

The Yankees opened this AL throwdown as -135 favorites but it’s the Astros seeing the early money, moving the line to Yankees -125. The total hit the board at 8.5 and has been bet down to 8.0 with that number juiced slightly to the Over as of Thursday afternoon.

Framber Valdez (7-3, 2.78 ERA): Vladez is on quite the roll. The lefty has not allowed more than three earned runs in a start over his last 10 starts and has pitched at least six innings in all 10 of those appearances.

Jameson Taillon (8-1, 2.70 ERA): Taillon has been everything the Yankees could have wanted and more this season. The right-hander has allowed two earned runs or fewer in 10 of his 13 starts and is pitching to a 1.07 WHIP this season.

The Yankees are 51-18. Jokes aside, they are 40-11 in their last 51 games as a favorite while the Astros are 2-6 in their last eight as an underdog. Find more MLB betting trends for Astros vs. Yankees

The Yankees are a juggernaut. They lead the MLB in OPS, home runs, team ERA, opponent OPS, and are second in scoring. As the dog days approach, the question really is, can anyone slow them down?

Well, the Astros would like to at least try, and that starts by getting a solid start out of Framber Valdez — something they've gotten a lot this year. The lefty is pitching to an expected ERA of 3.16 and giving up an opponent expected batting average of .245.

While Valdez has solid numbers, his stuff may not play as well against this Yankees team. The lefty relies on his sinker to get a lot of soft contacts, but if he misses his spots with that sinker, opponents can hit it a long way — which the Yankees do very well. On top of that, he doesn’t get a ton of strikeouts.

Valdez as made one start against the Yankees last season, and they got to him for three runs on six hits in just four innings.

The Yankees counter Valdez with Jameson Taillon. The right-hander’s purpose has always been to give his team five solid innings and hand the ball off to the Yanks' excellent bullpen. So, what he’s done this year has been a bonus, pitching to a 3.30 expected ERA.

Tonight, he faces an Astros team that certainly has some pop but ranks 18th in batting average against right-handers. On top of that, a ton of their production comes from the home run and Taillon has surrendered just six all year.

Taking the Astros as underdogs is tempting but we can’t pass up getting a price this low on the best team in baseball.

When it comes to the total, the early money has been on the Under and I tend to agree with that.

Taillon has been impressive this season, and in one start against the Astros last season, he limited them to two runs on three hits over six innings. He’ll then hand the ball off to a bullpen that ranks second in ERA and opponent batting average, and fourth in WHIP. That's against an Astros team that ranks 18th in runs per game when facing right-handed pitching.

Valdez has been just as solid, but if he does get in trouble against this Yankees lineup, Dusty Baker can transition to a bullpen that is arguably even better than New York’s. Houston’s relievers rank first in ERA, second in opponent average, and third in WHIP.

This game should have a playoff-type atmosphere and that intensity along with this pitching matchup should help this game sneak Under the number.

New York Yankees' slugger Giancarlo Stanton has always been known as a streaky hitter and right now, he’s hit a cold patch, but that just may be giving us some value here.

Yes, Stanton is just one for his last 26, but if there is something to take away from this stretch of games, Stanton isn’t wildly swinging at pitches. In fact, he has as many walks (seven) as strikeouts.

Now, he gets an intriguing matchup against Valdez, who pitches to contact.

One bad pitch and boom, slump over. Stanton is also 3-for-5 with a double in his career against Valdez. With Stanton also hitting a solid .267 against lefties this season, backing him to break his slump at this price is a solid bet. 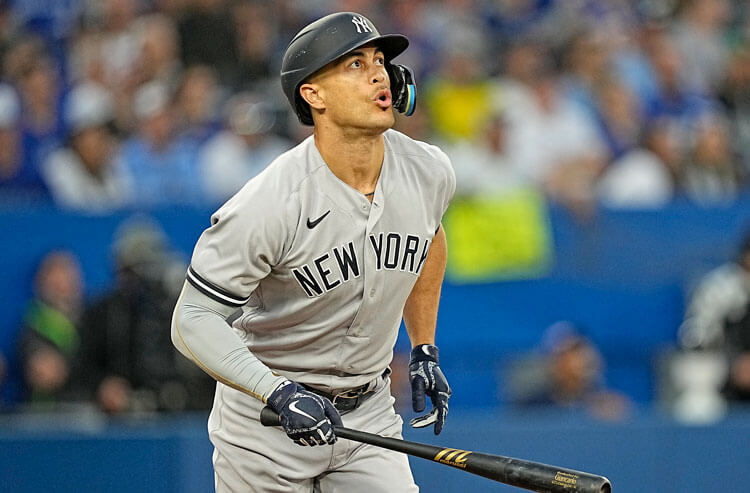 Astros vs Yankees Picks and Predictions: Box Office Series in the Bronx
Provided by