Monday's lighter MLB slate still has all kinds of hidden prop bet gems. We're mining the markets for your best value, focusing on some pitcher's duels, including a showdown between Dick Mountain and Kevin Gausman. Get today's best MLB prop bet picks right

The MLB kicks off the week with a bit of a lighter schedule and just 10 games on today's board but there is still plenty of value to be had in the MLB prop betting market.

In fact, there are several under-the-radar pitcher's duels going on today and we have found a trio of five-inning totals we are all over, including Dick Mountain and the Mets heading out west to take on Kevin Gausman and the Giants.

We break down and pick these games and more with our best free MLB prop bets and predictions for Monday, August 16.

The Kansas City Royals are just winding down the clock on the 2021 season, sitting in last place in the American League Central, and have lost four in a row heading into Monday’s matchup with the visiting Houston Astros.

The Astros hand the ball to Jake Odorizzi, who bounced back from his worst start of the season by shutting out the Rockies on three hits over five innings last time out. That performance dropped his ERA to 4.59 and his WHIP to 1.19. He’ll get the chance to improve on those numbers further when he faces a Royals team that ranks 28th in batting average and 27th in OPS when facing right-handers over the last month.

Carlos Hernandez will be on the bump for the Royals, and K.C. might have something in the rookie right-hander. Hernandez has allowed just two earned runs on 11 hits in 17 2-3 innings of work over his last three starts. Two of which came against the White Sox and the other against the Yankees.

The Astros have one of the best lineups in baseball but Hernandez has looked good against above-average lineups recently, so bet this one to be low-scoring early.

Cal Quantrill is starting to show some of why he was a first-round pick back in 2016. The right-hander is pitching to a 2.09 ERA and a .195 batting average over his last eight starts. He’ll look to stay hot when the soon-to-be Cleveland Guardians visit the Minnesota Twins.

Quantrill was roughed up in his last start against the Twins, but that was back in the middle of Juen and he has been a different pitcher since then, while the Twins have struggled against right-handers over the last month. Minnesota ranks 23rd in batting average and 19th in OPS when facing righties over the last 27 games.

On the other side, Griffin Jax takes the ball for Minny. The rookie right-hander is also in a bit of a groove, pitching to a 2.66 ERA and limiting opponents to a .153 batting average over the last four starts. He faces a Cleveland lineup that has had its own troubles against righties, ranking 21st in average and 23rd in OPS over the last month.

This might be the day’s most under-the-radar pitcher’s duel. Bet on it sneaking below the five-inning total.

The Mets are coming off getting swept by the Los Angeles Dodgers at home, dropping them to 2.5 games behind the Braves for first place in the National League East. Things won’t get any easier as they travel to the west coast to take on the NL West-leading Giants.

The Giants have been able to maintain their lead over the division thanks to winning 11 of their last 14 games and now they hand the ball to ace Kevin Gausman for the opener of this three-game set.

Gausman has bounced back from his mini-slump, allowing two runs on nine hits over his last two starts in 11 innings pitched. That has dropped his ERA to 2.29 and his WHIP to 0.97 for the season. Now, he faces a Mets team that is 0-25 in its last 25 at-bats with runners in scoring position and ranks 24th in batting and 23rd in OPS when facing right-handed pitching.

The Mets counter Gausman with Mr. Dick Mountain himself, Rich Hill. The lefty has allowed three earned runs or fewer in six of his last seven starts. With the Giants ranking a below-average 19th in batting average and 16th in OPS when facing southpaws, we like this one to be low-scoring early. 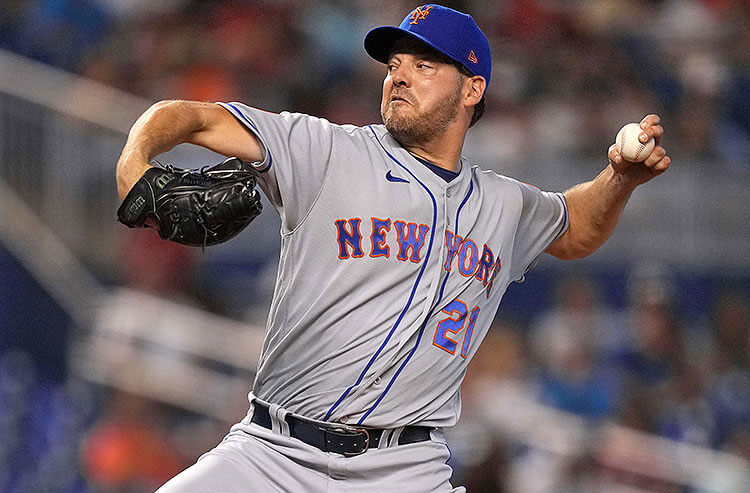