The Yankees are hobbled and Gerrit Cole might be a bit rusty after a COVID-induced absence, but the Angels have struggled mightily at the plate, and send a shaky starter to the mound. Find out who's worth your backing with our Angels vs. Yankees picks.

The New York Yankees will try to close the gap in the AL Wild Card race as they host the Los Angeles Angels on Monday night.

This will serve as a makeup game from a July 1 postponement and MLB betting lines have the Yankees installed as massive -270 home favorites with the Over/Under set at 8.5.

Here are our best free Angels vs. Yankees picks and predictions for Monday, August 16, with the first pitch scheduled for 7:05 p.m. ET.

Jose Suarez (5-5, 3.90 ERA): Suarez has pitched to a 1.25 WHIP with an opponent batting average of .232 this season in 55 1-2 innings as both a starter and reliever. The southpaw surrendered seven hits and four earned runs in 5 1-3 innings against the Jays last week and has pitched to a brutal 6.75 ERA in his previous four outings.

Gerrit Cole (10-6, 3.11 ERA): The Yankees ace will take to the mound for the first time since July 29 after recovering from COVID-19. Cole was torched for eight runs (seven earned) in 5 1-3 innings in that previous start. The right-hander has been one of the best pitchers in the majors since 2018, but while his overall numbers look strong this season, he has struggled over the last couple of months.

The Angels are 5-12 in their last 17 games versus a team with a winning record. Find more MLB betting trends for Angels vs. Yankees.

Although the Yankees get Gerrit Cole back after a battle with COVID-19, they still have a host of starters out due to the illness, while a few others are injured. Nonetheless, the Yankees have shown their resiliency, going 12-4 over their last 16 games, and are just 2.5 games behind the A's and Red Sox for a Wild Card spot.

The Bronx Bombers have struggled at the dish for much of the year, but have come alive lately, plating an impressive 5.5 runs per game over the last 15 days.

The Angels are fresh off a 3-1 victory over the Astros but are just 3-6 in their last nine games to fall one game below .500 on the season. Los Angeles is led by AL MVP favorite Shohei Ohtani, who leads the majors in 39 home runs while also pitching to a 2.93 ERA in 17 starts.

However, Ohtani won't be on the mound tonight and the rest of the Halos have been brutal at the plate lately, ranking just 29th in the majors with an OPS of .652 since the All-Star break.

L.A. will give the ball to 23-year-old Jose Suarez, who has struggled in six games as a starter this season, pitching to a 5.79 ERA with a 1.39 WHIP. Cole hasn't been at his best recently, but he still has a 1.11 WHIP and 176 strikeouts in 130 1-3 innings on the year and has mostly been getting lit up by strong offensive teams, so he should be happy to face off against a struggling Angels lineup.

At -270 the moneyline is way too steep on the Yankees for this contest, but given the different directions these teams are moving in, I like the home side on the run line at -130.

Cole's resume is much more impressive than his Angels counterpart, but this is his first game back since recovering from COVID-19, so he might be a tad rusty. It's also worth mentioning that he was in a slump even before his diagnosis, pitching to a 4.68 ERA in 10 starts since the beginning of June.

Cole also said, "I don't think we'll push the limits by any means because the recovery will be very important," suggesting that he won't be his typical workhorse self. That would make the Yankees more reliant on a bullpen that is missing closer Aroldis Chapman and has two of their best relievers (Jonathan Loaisiga and Lucas Lutege) unlikely to play tonight after appearances in each of the last two games.

New York's big bats really came alive on their recent six-game road trip, averaging 6.17 runs per game with an OPS of .817. They also plated at least five runs in five of those six contests and went 4-2 O/U over that span. Take the Over 8.5 tonight. 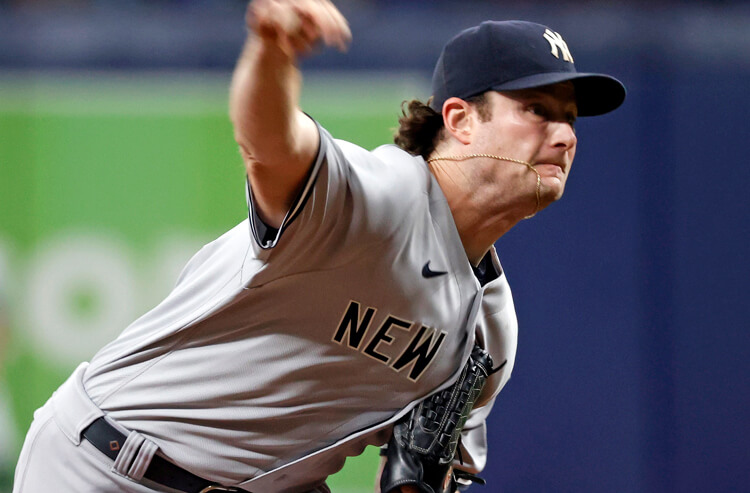 Angels vs Yankees Picks and Predictions: Cole Position
Provided by