Two sides with identical records square off as Oakland tries to pry some leverage in the Wild Card race. Find out if they're worth backing as favorites on the road as we break down this close matchup with our A's vs White Sox picks.

The Oakland Athletics try to hold on to the AL Wild Card spot as they head to Guaranteed Rate Field for a four-game set against the Chicago White Sox.

Oddsmakers are expecting a close battle between these teams with MLB betting lines opening with the Al-Central leading White Sox as slim -105 home underdogs for the first contest in this series on Monday night.

Here are our best free A's vs. White Sox picks and predictions for Monday, August 16, with the first pitch scheduled for 8:10 p.m. ET.

Frankie Montas (9-8, 3.98 ERA): Montas has a 1.24 WHIP with an opponent batting average of .248 and 146 strikeouts in 130 1-3 innings this season. He's fresh off a strong performance against Cleveland where he allowed just two hits and one run in six innings of work.

Dallas Keuchel (7-6, 4.51 ERA): The former two-time All-Star has regressed in his second season in Chicago after a strong 2020 campaign. Keuchel has pitched to an opponent batting average of .256 with a 1.33 WHIP in 22 starts. In his last outing, he walked four and surrendered four runs in six innings versus the Twins.

White Sox: Leury Garcia 2B (Out), Yasmani Grandal C (Out).

The Athletics are 8-3 in their last 11 road games. Find more MLB betting trends for Athletics vs. White Sox.

These teams come into this matchup with identical 68-50 records, but while the White Sox have a massive 10-game lead in the AL Central, the Athletics are 2.5 games behind the Astros in the AL West.

Based on current form, Oakland should have the edge on the mound today as well. They'll send Frankie Montas to the mound and the right-hander has pitched to a 2.49 ERA with a 1.04 WHIP in seven starts since the beginning of July.

Dallas Keuchel will toe the rubber for Chicago and the usually-reliable lefty has been struggling, posting a 5.74 ERA and 1.47 WHIP in nine starts since June 20.

The White Sox have lost four of their last five games overall, while losing four in a row when Keuchel gets the start. On the other hand, the A's are 8-2 in their previous 10 contests overall while going 4-0 in Montas' last four starts.

With the A's 17-5 in the last 22 meetings between these clubs, back them as slim road favorites tonight.

Both of these teams can put up runs and have been bolstered by recent additions, with Eloy Jimenez returning from pectoral surgery to tear it up (slashing .333/.350/.719 in 15 games) for Chicago and Starling Marte batting .382 and stealing 11 bases in 15 games since being acquired by Oakland at the trade deadline.

The A's have averaged 7.2 runs per game over their 10, and while that number is inflated by a 17-0 rout of Cleveland last Thursday, they plated at least four runs in each of those contests, so they've been consistent as well.

Meanwhile, the White Sox are averaging 5.78 runs/game over their previous nine contests and have exploded for at least eight runs in four games during that span.

Keuchel's play has been particularly problematic lately and he has given up at least four earned runs in three of his last four starts. While he leads the majors in ground-ball outs this season, he's already surrendered a career-high 21 home runs and his opponent slugging percentage of .441 is his worst number since his sophomore season in 2013.

When you're a pitcher like Keuchel that historically thrives on allowing contact, getting hit hard is a terrible sign. With the A's cashing the Over in four straight games and the White Sox going 7-3-1 O/U in their last 11 home contests, back the Over 9 tonight. 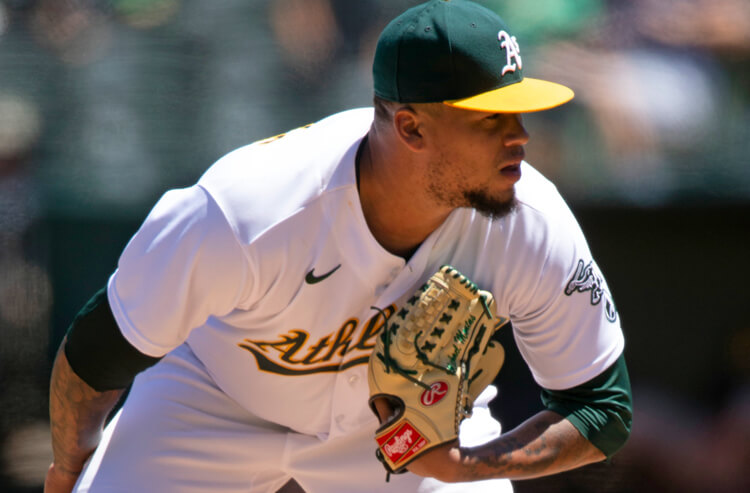