We're scouring the MLB's prop bet markets again today, searching relentlessly for your best value. Bet on the Jays' slump at the plate to continue with George Springer ailing, and back a pitcher we'd normally fade with our best MLB prop picks.

We’re in the middle of the dog days of summer, with numerous and possibly exploitable MLB prop markets. This article will try to find some of MLB’s best props and side bets for the day and does all the heavy lifting so you don’t have to. If there’s a line on it, we’ll look into it.

Coming off another winning Saturday (2-1 SU +1u), we’re double-dipping on a usually fadeable pitcher with fire-sale prices, finding a lead-off hitter to top his total bases and betting against one of the best offenses in baseball.

Check out our favorite MLB free prop bets and predictions for Sunday, August 15.

J.A. Happ has been downright terrible this year and has been a big fade target for the majority of the betting community. However, a trade to the Cardinals may have given the left-hander a new lease on life and a fresh start. Since being traded from the Twins, Happ has made two starts for the Cards and has given up just three runs on six hits over 11 innings.

Today, he faces the Royals who rank 29th in wRC+ in the second half and also have the second-lowest OBP in baseball since the All-Star break. Kauffman Stadium also has the best pitching conditions out of every park on Sunday with a -0.87 HR and a -2.98 total bases effect, per ballparkpal.

Happ has nine strikeouts in his two starts, and even though taking NL pitchers can be scary as they can be lifted early for a bat, we’re rolling the dice on these rock-bottom prices for the Cardinals starter.

We have been successfully betting on cold bats of late and will look to add to our 2-0 record on Sunday. The rules are simple: find a solid stick that is struggling, in a good match-up, and find his best prop and hit the Over. Today, we’re eyeing Cincinnati’s Jonathan India.

India has been a catalyst at the top of the Cincy lineup this year, as he sports the seventh-best OBP in the league at .396 and knows how to handle the lumber with a .275 batting average. He doesn’t have a ton of pop, but we only need a single base with his total-bases prop sitting at 0.5.

The Reds’ lead-off man is hitless in the series but still has 16 hits over his last 15 games. Since May 14, India has gone hitless in two straight games just one other time and came out of that with a 2-for-5 showing and a home run. He is 1 for 2 lifetime against Aaron Nola, who gave up eight hits and three runs over five innings in his only meeting with the Reds this season.

This prop checks a lot of boxes for us: lead-off batter, visiting team and positive ballpark effects (+1.51 bases per ballparkpal). It’s a double-unit wager to win 1.08u.

It seems like just yesterday we were gushing over the Toronto Blue Jays and their potent offense. Well, things have gone sour of late for the traveling Jays, who find themselves in a get-away game in Seattle that will conclude their West Coast trip before a series in Washington on Tuesday.

They come into Sunday’s finale having lost three straight and have managed just eight runs over the losing streak. They also were dealt a massive blow as George Springer exited Saturday’s game, with the extent of the injury not known yet, but we’re pretty sure he won’t play Sunday, even if the injury isn't serious with an off day tomorrow.

The Jays were rolling at home during a 12-game home stretch, but have failed to take that offense with them on the road, where they score a full run less on the season. Toronto is scoring 4.16 runs per game on its West Coast trip and hitting .250 with just one multi-home run game.

Logan Gilbert will get the task of shutting down the Jays Sunday. The 6-foot-6 right-hander has allowed three or fewer runs in six of his last seven starts and batters are posting a .666 OPS against the former first-round pitcher this season. The Toronto offense is in a tough spot to top its team total of 4.5 Sunday afternoon. 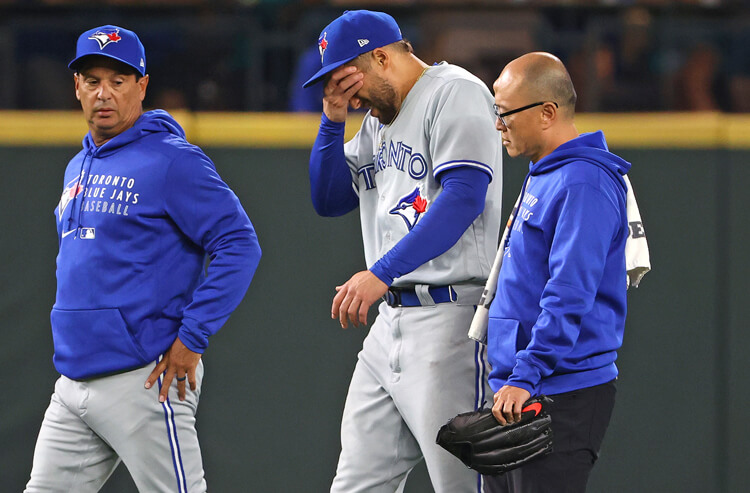