Though unexpected to many, it's been Joe Musgrove who's led the Padres' rotation and is now sporting one of the best pitching profiles in baseball. Back him to protect his undefeated record and lead the Padres to victory — as our MLB picks explain.

The Philadelphia Phillies have dropped three straight and enter the final series of their 11-game road trip against the San Diego Padres, winners of three straight.

The Padres are now tied with the Dodgers for the NL West, a feat many would have considered improbable during Fernando Tatis Jr.'s absence.

Can the Padres keep the Tatis-less top-tier play up or will the Phillies finally turn things around and end this road trip on a high note?

Continue reading for free MLB picks and predictions for the Thursday night matchup between the Phillies and Padres on June 23.

The Padres opened as moderate favorites in the -150 range and have moved as high as -160 at some shops. The total opened at 7 and has stayed there, with most books showing heavy juice on the Over that may suggest a move to 7.5.

Ranger Suarez (5-4, 4.43 ERA): Suarez was a name found on potential breakout candidate lists during the offseason but has been largely pedestrian thus far. His 4.43 ERA and 1.51 WHIP aren't anything to write home about, but if anything he has been a consistent innings eater while never particularly putting the Phillies out of games. He has allowed three or fewer runs in all but one of his 13 starts, and the Phillies have gone 8-5 in those games.

Joe Musgrove (8-0, 1.60 ERA): If a few years ago you were to read the list of starting pitchers the Padres would go on to acquire, it is extremely unlikely that anyone would have picked Joe Musgrove as the potential best of the lot. After breaking through with a 3.18 ERA and 1.08 WHIP campaign in his first season with the Padres last year, he is one of three remaining pitchers with an undefeated record this year with an 8-0 record and a sterling 1.59 ERA to match.

The Phillies possess the best Overs record in all of baseball at 39-29-2 (57.4%). Find more MLB betting trends for Cardinals vs. Brewers

Phillies vs Padres picks and predictions

The Padres have been entirely unshy in recent years regarding their intent to push in all of the chips in pursuit of a championship. One easy example of that has been how much they've spent acquiring starting pitching.

The Padres dealt four prospects (including Luis Patino, their No. 2 prospect at the time) for former Cy Young winner Blake Snell. Snell has pitched to a disappointing 4.43 ERA since the move and began this season on the injured list. Since returning, he has pitched to a 5.46 ERA and 1.45 WHIP in six starts.

During the season prior, they sent a haul of prospects for Mike Clevinger, who was one of the best young arms in baseball at the time (career 3.20 ERA). That was in 2020, and Clevinger has made just nine starts for the Padres since then. The names that were sent in return? Regular contributors for the Guardians such as Josh Naylor (.280 BA and 38 RBIs), Owen Miller (32 RBIs), and the Guardians' now No. 3 prospect Gabriel Arias, as well as others.

They made similar trades for Yu Darvish and Sean Manaea prior to the start of each of the past two seasons, and those trades in comparison have worked much more favorably. However, none of these moves have been as successful as the one for Joe Musgrove — the least likely name of the bunch to be hailed as such.

Musgrove came over via a trade in last year's offseason, and expectations were realistic with him at the time. Across his first five seasons with the Astros and Pirates, Musgrove accumulated a 4.33 ERA and was largely viewed as a decent starter to have in the middle to end part of a rotation. What the Padres have gotten instead has been a pleasant but welcomed surprise.

In his first season with the Padres, he pitched to a career-best 3.18 ERA and 1.08 WHIP while hitting career highs in starts and innings pitched. He has followed that up this year with a perfect 8-0 record and 1.59 ERA. He ranks in the 92nd percentile in average exit velocity allowed, 92nd in expected weighted on-base average (xwOBA), 73rd in strikeout rate, 82nd in walk rate, and 83rd in chase rate. And his stuff has been nasty, with a 98th percentile fastball spin rate and 84th percentile curveball spin rate.

And Musgrove is the exact type of pitcher the Phillies, who to their credit rank sixth in runs per game, don't want to see on the mound Thursday night in their attempt to snap a three-game losing streak.

But as previously mentioned, Philadelphia does score runs at the sixth-highest rate in the league (4.77). San Diego is not far behind at 4.75 runs per game, good for ninth.

Ranger Suarez takes the mound for the Phillies and is currently the definition of a good-but-not-great pitcher. His 4.43 ERA is perfectly "meh" and while he has allowed more than three earned runs just once in his 13 starts, he is seemingly always flirting with breaking through that mark. He has allowed two or three runs in ten starts, which shows he's pretty reliable to surrender a few.

On top of that, the weather is projected to help with hitting tonight. The temperature and wind shouldn't play much of a factor, but the humidity projects to be 20-24% higher than the humidity of the humidors that the balls are stored in.

By all means, the Phillies are not a team to simply shrug off and dismiss, but given the context of tonight's matchup, they simply are a hard team to back. They've managed to score just seven runs combined across their last four games while the Padres have scored three or more runs in their last ten.

And while Ranger Suarez certainly has the tools and time to shape his career into something more spectacular, the pitcher he is today simply does not stack up in comparison to the 8-0 Joe Musgrove that's maintaining a 1.59 ERA.

Only one other pitcher has as good of a record and ERA (Tony Gonsolin's 9-0 and 1.58 ERA), which speaks volumes to the gap between the two.

On top of that, the Phillies' lineup having extensive struggles against Musgrove in particular doesn't fare well. And in the later stages of the game, the Padres have a bullpen sporting a 3.41 ERA compared to the Phillies' 4.27.

So while the odds may be a little heavy on the juice, it's easy to see why. Given the size and amount of edges the Padres have tonight, expect them to demonstrate why they probably should be favored even more. 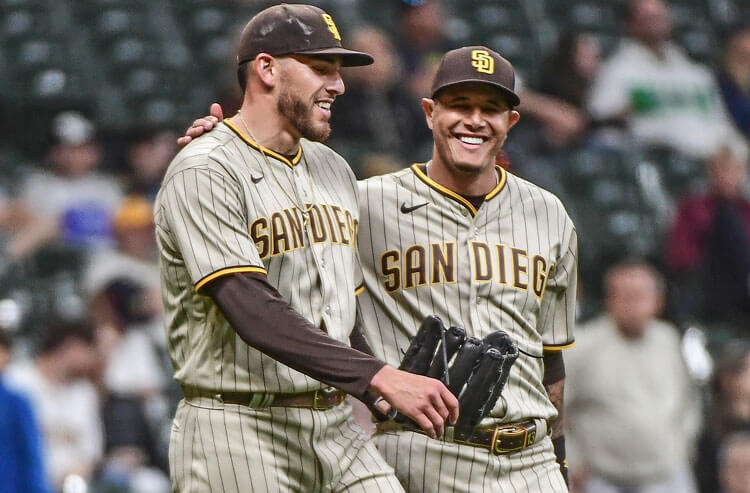