Two inconsistent pitchers face off a Citi Field Saturday night when New York hosts Philadelphia. And with the Mets mashing, and Philly's lineup primed to improve, we're seeing the potential for plenty of runs with our Phillies vs. Mets picks.

The New York Mets and Philadelphia Phillies face off at Citi Field on Saturday night. The Mets took the first game of this three-game set last night and oddsmakers expect them to win again, installing them as slim -125 favorites for today's AL East showdown.

Here are our best free Phillies vs. Mets MLB picks and predictions for April 30.

Kyle Gibson (2-1, 3.47 ERA): Gibson opened this season with a gem against the A's, where he pitched seven innings of shutout ball and allowed just two hits while fanning 10 batters. He's regressed a bit since then and in his last two starts (both against the Rockies) he has allowed a total of five runs with seven punchouts in 11 2-3 innings of work.

Gibson had a Jekyll and Hyde campaign in 2021, pitching to a 2.87 ERA in 113 innings with the Rangers and posting a 5.09 ERA in 69 innings after being acquired by Philadelphia.

Taijuan Walker (0-0, 0.00 ERA): This will be Walker's return to the mound after his first start of the season on April 11 (also against the Phillies) where he pitched two perfect innings before leaving with shoulder bursitis.

The veteran struggled with his first season with the Mets in 2021, going 7-11 with a 4.47 ERA in 29 starts. Walker said he expects to be able to throw about 80-85 pitches after he had a 64-pitch simulated game on Monday.

The Phillies are 1-10 in their last 11 games as an underdog. Find more MLB betting trends for Phillies vs. Mets

The Mets beat the Phillies 3-0 last night to improve their record to an MLB-best 15-6. They are currently fourth in the majors with an OPS of .738 but the biggest reason for their success has been the dominance of their rotation. That rotation will get Taijuan Walker back today after the veteran right-hander missed his last two starts with shoulder bursitis.

Walker is coming off a disappointing season where he had a 4.47 ERA, due in large part to a high walk rate and a tendency to get hit hard. That said, his 1.18 WHIP and opponent batting average of .225 were both very solid and indicate that while he's no Max Scherzer, he's also no pushover.

Walker said he expects to be able to throw about five innings in his return today and the Mets have a strong bullpen behind him with their relievers pitching to a collective 3.16 ERA.

The Phillies' loss last night snapped a four-game winning streak (sweeping the Rockies at home earlier this week) and dropped their record to 10-11. Philadelphia has been solid at the dish, ranking 11th in the majors with an OPS of .716, but there's definitely room for improvement in that area.

The Phillies will give the ball to veteran Kyle Gibson. Gibson was off to easily the best season of his career at the beginning of last year before regressing to the inconsistent level that we've come to expect from the 34-year-old.

The Mets have been one of the most impressive teams in the majors so far this season and there's little reason to consider fading them at home with such a short line in this spot.

It's tough to trust either pitcher in this one. Walker is coming off a subpar season and might be the weakest link in this rotation, while Gibson's play in the first half of last year (and his first game this season) were clear outliers for what has been a mediocre career.

Meanwhile, both teams have dangerous lineups. The Mets have a fearsome power hitter in Pete Alonso, one of the best hitting shortstops in the majors in Francisco Lindor, and a host of other guys who consistently make contact.

The Phillies are led by last year's NL MVP Bryce Harper and have a bunch of sluggers that can mash. Although proven power hitters like Kyle Schwarber and Rhys Hoskins have been a bit inconsistent at the plate, they look poised to break out.

The Phillies are third in the majors in sweet spot percentage and fourth in hard-hit-rate so it's just a matter of time before that results in plenty of runs.

This total is sitting at a relatively low 7.5, which really makes the Over look ripe for the picking given our previous analysis.

Keep in mind that before getting shutout last night, the Phillies had scored at least seven runs and had cashed the Over in four-straight games. Meanwhile, despite their terrific pitching, the Mets are actually 8-1-4 to the Over in their last 13 games with a total of 8.5 or lower.

Did you know that if you parlayed today’s MLB Phillies vs. Mets picks, you could win $26 on a $10 bet? 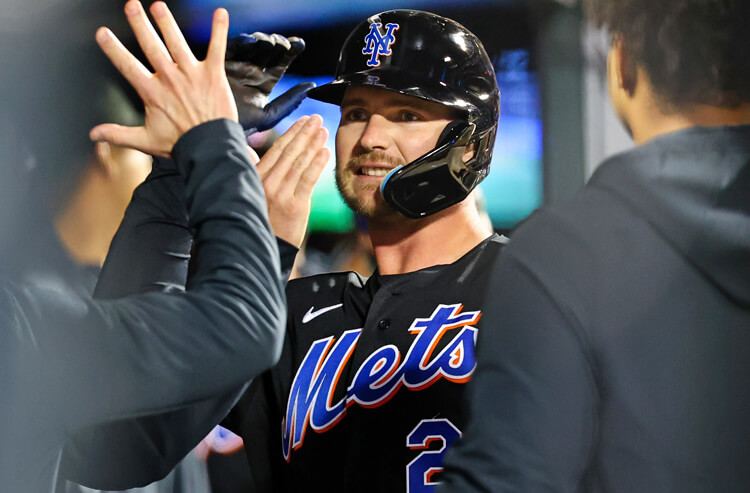 Phillies vs Mets Picks and Predictions: Can't Fade Mets — Or Runs
Provided by