Despite their records being under .500, Miles Mikolas and Aaron Nola have pitched some of their best stuff this season. As such, our MLB betting picks are fading these offenses by going Under on the game total and the Cards' team total.

Philadelphia took the first two games of the series thanks to dominant pitching, winning both in shutout fashion. St. Louis answered with a 4-3 victory in Game 3 after erasing a 3-1 deficit.

Will the Cardinals even things up in the series, or will the Phillies manage to keep up their winning ways despite the absence of Bryce Harper in the lineup?

Check out our MLB picks and predictions for the Philadelphia Phillies and the St. Louis Cardinals on Monday, July 11 to find out.

The Cardinals opened as slight -105 favorites at home, but some money has come in on the other side and they’re now the slight underdog. The line currently resides between St. Louis +104 and +112 depending on the book. The total opened at 7.5 across all books but has moved to 8 in a few spots.

Aaron Nola (5-6, 3.15 ERA): Nola has been pitching in the big leagues since 2015. Only twice has his ERA jumped above 4.00 over the length of a full season: during his sophomore campaign in 2016, and last season. He’s rebounded nicely after a down season, posing his second-lowest xERA (2.81) in any season with a stellar 2.91 FIP to match. He’s switched his profile up by striking out fewer batters (27.8% strikeout rate) than he has in his last three seasons and posting the lowest walk rate (3.5%) of his career. He’ll look to get back on track after allowing seven earned runs across his last two starts.

Miles Mikolas (5-7, 2.72 ERA): Mikolas is having arguably the best season of his career. His 2018 numbers are hard to top (18-4 record, 2.83 ERA), but his 2022 effort sees him pitching at basically the same level. His 3.51 xERA does indicate some minor regression may be coming, as does his 3.65 FIP. He went five straight starts without allowing more than two earned runs before allowing three last time out against the Atlanta Braves. He’s not a strikeout pitcher (19.7% strikeout rate) and, similarly to Nola, he also limits walks (5.2% walk rate).

The Under is 5-0 in Philadelphia's last five games. Find more MLB betting trends for Phillies vs. Cardinals

Phillies vs Cardinals picks and predictions

The Cardinals are in the midst of a slide, going just 2-6 in their last eight games overall. They get a chance to stop the bleeding by sending Miles Mikolas and his superb 2.72 ERA to the mound in a concluding Game 4 against the Phillies.

The issue? They’ll be facing Aaron Nola, one of the game’s steadiest pitchers. His 2.81 xERA and 2.91 FIP both indicate continued success this season, and it’s hard to poke any holes in his game.

On top of that, the Phillies have been hot, winning five of their last seven overall. They’ve also relished playing in the final game of a long series, going 20-7 across their last 27 in the fourth game of a series.

Looking at both lineups’ numbers across the last 15 days, it’s evident that the Phillies have been swinging the sticks better than their opponent. Across that time frame, Philadelphia ranks ninth in OPS, 23rd in wOBA, and 10th in wRC+. Meanwhile, the Cardinals’ ranks in the last 15 days are as follows: 23rd in OPS, 24th in wOBA, and 22nd in wRC+.

Despite being shorthanded due to the absence of Bryce Harper for some of those contests, the Phillies are performing at a Top-10 rate while the Cardinals’ lineup ranks outside the Top 20 during recent outings.

There isn’t a lot separating these two teams, but I give the Phillies a slight advantage in both starting pitching and hitting.

The advantage in relief pitching goes to the Cardinals, but it’s not as big of a gap as usual due to the Phillies’ bullpen performing much better this season than in recent years. Give me the Phillies.

These are two quality starting pitchers so I start my handicap looking at the Under while waiting to see if any negatives stand out. Let’s dive in.

Nola’s put up a sterling profile in 2022. You find many holes in someone’s profile when they strike out a ton of batters (27.8% strikeout rate), place a severe limitation on free passes (3.5% walk rate), and have a 2.81 xERA. If anything, his 3.15 ERA seems higher than it should be when evaluating his total profile.

Nola faces off with a Cardinals lineup that has been on a cold streak, ranking outside the Top 20 in nearly every metric over the last 15 days.

Mikolas’s profile isn’t quite as impressive as Nola’s. He’s not a strikeout pitcher (19.7% strikeout rate) and his 3.51 xERA and 3.65 FIP both indicate some minor regression is due. That being said, he’s been an expert at limiting the damage this season and a 2.72 ERA is nothing to sneeze at.

The Under is 5-0 in the Phillies’ last five games overall. As for the Cardinals, the Under has cashed in eight straight games when they face a team with a winning record and 5-0 in their last five home games. I'm backing it here once again.

I’m playing the full game Under in this contest, but for my best bet, I’m focusing on the Cardinals’ team total.

Nola has one of the most impressive profiles in the league. He excels at striking out batters and is posting the lowest walk rate of his career. I fancy his chances for a productive outing against a St. Louis lineup that ranks just 24th in wOBA over the last 15 days.

The Cardinals’ team total is listed at 3.5. That’s a mark they’ve gone over just once in the last five games, and now they have a very difficult assignment against Nola.

Did you know that if you parlayed today’s MLB Phillies vs. Cardinals picks, you could win $53.69 on a $10 bet? 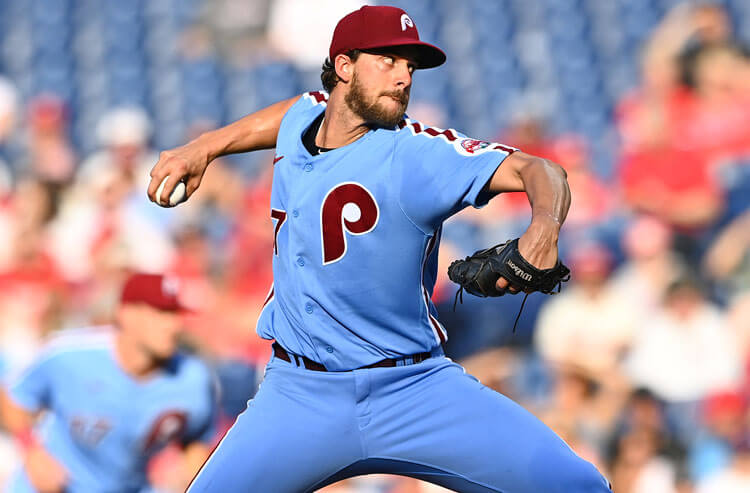