If for some weird reason you haven't heard, the Toronto Blue Jays are rolling, having won 14 of their last 18 games behind a handful of bats — most notably Lourdes Gurriel Jr. With no reason to think otherwise, our MLB picks are going back to the well.

If you feel a little bit like these Toronto Blue Jays articles are on repeat, yu aren’t wrong. The Blue Jays' bats continued to make noise in their 11-1 series-opening win against the Baltimore Orioles.

It was the Blue Jays' 14 of their last 18 games, and you can expect more fireworks in Game 2 between these American League East foes. That’s because Jordan Lyles will be toeing the rubber against Yusei Kikuchi. Does the total of 9 stand a chance?

Find out in our free MLB betting picks and predictions for Orioles vs. Blue Jays on Tuesday, June 14.

The Blue Jays opened this AL East matchup as -210 home favorites, but the line hasn’t seen much action as of Tuesday afternoon. The total, on the other hand, hit the board at 9.5 and has been bet down to 9 at the time of writing.

Jordan Lyles (3-5, 4.97 ERA): Lyles doesn’t look much more than an innings eater for the Orioles at this point. The right-hander has given up 13 earned runs on 26 hits in 14 1-3 innings over his last three starts.

Yusei Kikuchi (2-2, 4.44 ERA): After it looked like Kikuchi bounced back in May, his inconsistent ways have returned. That includes the shortest start of his career, lasting just two-thirds of an inning against the Royals.

The Over is 5-1-1 in the Orioles' last seven road games and 7-0 in the Blue Jays' last seven home games. Find more MLB betting trends for Orioles vs. Blue Jays

After a slow start to the season, the Blue Jays' offense is showing us just how dangerous it can be after going 14-4 in their last 18 games overall. Over that stretch, the Jays lead MLB in batting average, OPS, and wRC+.

That was certainly evident in the Jays’ 11-1 series-opening win against the Orioles where all nine starters had at least one base hit, and seven of them had at least two. They’ll try to keep that going in Game 2 tonight when they face off against Jordan Lyles.

As noted, the veteran right-hander is in a slump, dropping his expected ERA to 5.59 while surrendering an expected batting average of .302 to opposing teams. In one start against the Jays last season (as a member of the Texas Rangers), he allowed six runs on seven hits in four innings. That doesn’t bode well going against a lineup that is as locked in as this one is.

The Orioles have some hope in this one, as the Jays counter with Yusei Kikuchi. It looked like Kikuchi had figured some stuff out after a month of May that saw him pitch to a 2.66 ERA and limit opponents to a .177 batting average. But he has regressed so far in June giving up seven runs on nine hits in just 5 1-3 innings over two starts.

That said, Kikuchi recorded a quality start against the Orioles last season, holding them to three runs on five hits while striking out seven over seven innings. And while this O’s team is a scrappy bunch they still rank 23rd in batting average and 24th in OPS when facing lefties.

The early money hit the Under hard enough to move the number from 9.5 to 9, but you should be happy to jump on the other side at that number.

As we’ve talked about, seemingly for days now, the Jays' offense is capable of doing most of the damage themselves. As evidenced by their 11 runs in the opener and by averaging 6.89 runs per game over the last 18 games. They have also scored six or more runs 14 times over that stretch.

So, that basically means we need just three runs from the Orioles in this one, and for starters, they score 3.64 runs per nine innings when facing lefties this season. And of course, there is the matchup with Kikuchi.

Kikuchi has an unimpressive 5.52 expected ERA thanks to finding too much of the plate with his fastball and cutter. And those pitches have been hit. Hard. Kikuchi ranks in the Bottom 6% in MLB in average exit velocity and hard-hit percentage.

The Orioles are good enough to help get this one Over.

Sportsbooks still haven’t figured out how hot Lourdes Gurriel Jr. is at the plate. So, until they do, we’re going to go back to the well with his total bases prop at plus money for the second time in as many days.

The Blue Jays outfielder, who has notoriously been a slow starter over the course of his career, is starting to heat up with the summer months. Gurriel is now in the midst of an eight-game hitting streak, hitting .500 with a 1.217 OPS during this stretch. The most impressive part is that he has recorded a multi-hit game six times in this eight-game span.

Gurriel gets another good matchup against Lyles so we’re going to keep riding this train until he cools off or the value dries up. 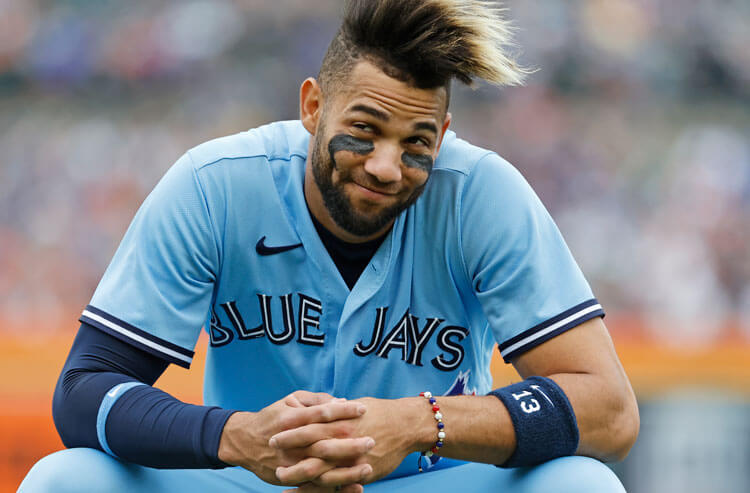