Astros vs Rangers Picks and Predictions: Texas Chips Away at AL West Lead

Looking to close the gap between them and the Astros atop the AL West, the Rangers got a big win in the series-opener on Monday. Can they keep chipping away with another win tonight? Read our MLB betting picks and predictions to find out.

The Texas Rangers took the opener in this three-game set against the Houston Astros on Monday.

Now, the Rangers will be going for their fourth win in a row and will also be looking to make up some ground in the AL West standings.

Will Texas earn back-to-back wins over Houston? Keep reading our Astros vs. Rangers MLB picks and predictions to find out.

The Astros were -122 favorites when this line first became available, and they’re now anywhere between -120 and -135.

The total, which opened at 9, is still at 9 across most major sportsbooks, but it does look like you’ll have to pay a pretty hefty price to take the Under.

Jose Urquidy (5-3, 5.04 ERA): Urquidy is coming off of a really nice 2021 season, as he went 8-3 with a 3.62 ERA in a year in which he started 20 games. The righty is, however, struggling quite a bit in 2022, and he comes into this one after having allowed 12 earned runs over his last 15 innings of work. Houston has lost in two of Urquidy’s last three starts, and the team needs him to settle in soon.

Dane Dunning (1-4, 4.41 ERA): Dunning had a really tough outing in his last start, as he gave up four runs on nine hits in four innings of work in a 4-0 loss to the Cleveland Guardians. The righty has had an up-and-down season thus far, but he is 1-1 with a 3.53 ERA in six home starts in 2022. As such, he should be a bit more comfortable when he gets to the mound today.

Astros: Blake Taylor P (Out), Jake Odorizzi P (Out), Jake Meyers OF (Out), Lance McCullers P (Out), Taylor Jones 1B (Out).
Rangers: Josh Smith 2B (Out), Brad Miller OF (Out), Albert Abreu P (Out).
Find our latest MLB injury reports.

The Rangers are 6-3 in their last nine games as home underdogs. . Find more MLB betting trends for Astros vs. Rangers

Astros vs Rangers picks and predictions

The Rangers are coming off of a 5-3 win over the Astros and they’ll need to keep earning victories in this head-to-head series in order to make up some ground in the division.

Texas is currently 7.5 games behind Houston in the AL West, but a win here would help the team chip away even more. And the Rangers should like their chances in this spot, as Jose Urquidy just isn’t pitching well right now.

The 27-year-old was great in his last start against the Rangers, but Texas will be hoping that his recent form carries over to tonight. The righty has been extremely beatable in recent weeks, and he has given up a homer in each of his last five outings.

If he can’t keep the ball in the park, the Astros are going to be in trouble. He has also had two games in which he has given up double digits in hits in his last five starts, which should give you an idea of just how hittable he is at the moment.

Dunning also happens to have pitched well against the Astros in his only start against the team this year. He went 5 2-3 innings in that start and gave up only two earned runs, and he should be able to turn in something close to a quality start in this one.

If he can find a way to give up three or four runs, Texas is the better bet in this game as long as the team’s bullpen doesn’t fall apart.

These two went Under the total in Monday’s game, but this one features an even worse battle on the mound.

Urquidy pitched 6 2-3 innings of one-run ball and struck out 10 batters the last time he faced this Rangers team, but the righty has fallen apart since. He comes into this one after three shaky outings in a row, and it’s just hard to see how he’ll find a way to get the job done here.

Urquidy has a 6.61 ERA in seven road starts and that should be music to Over bettors’ ears. Also, Dunning isn’t the type of pitcher to go out and shut down opponents — especially ones with as much firepower as the Astros.

Semien hasn’t even come close to living up to the contract he signed with the Rangers in the offseason, but he is coming off a game in which he went 3-for-4.

The second baseman is bound to get hot and raise his batting average rather soon, and perhaps last night’s game will be the start of it. The 31-year-old clearly has a lot left in the tank, and it’s just hard to see him not being a big part of this Texas offense the rest of the year.

Semien also happens to be 5-for-13 with two doubles and a homer in his brief head-to-head history with Urquidy. That’s not exactly a lot to base a bet on, but Semien should feel pretty good about this matchup — especially with Urquidy really struggling of late. 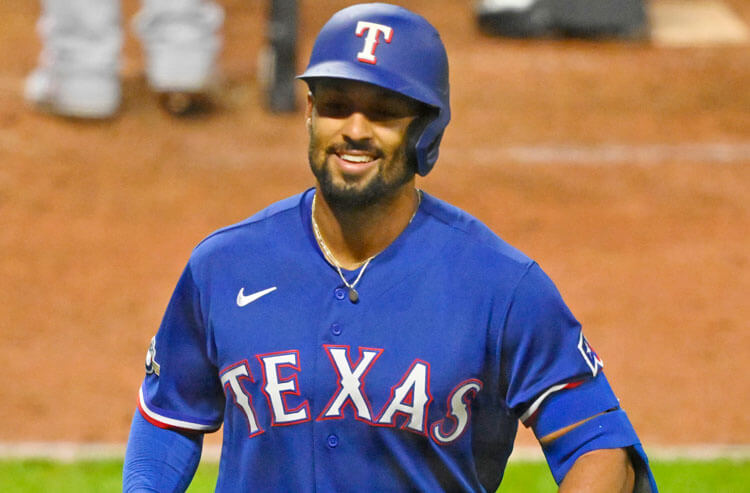 Astros vs Rangers Picks and Predictions: Texas Chips Away at AL West Lead
Provided by