To kick off a four-game series with the Orioles, the Blue Jays are sending one of baseball's best starters in Alek Manoah to the hill. With the O's countering with a shaky rookie, our MLB picks are expecting the Jays to have things pretty easy.

The Toronto Blue Jays bats continued to make noise over the weekend, plating 17 runs in their three-game series against the Detroit Tigers. They’ll look to keep swinging hot sticks when they open a four-game set with the Baltimore Orioles.

The Blue Jays have ridden those bats to wins in 13 of their last 17 games but aren’t any closer to tracking down the Yankees at the top of the AL East. So, they can’t afford to drop too many games to the pesky Orioles. But is it worth backing them at a high price tonight?

Find out in our free MLB betting picks and predictions for Orioles vs. Blue Jays on Monday, June 13.

The Jays opened this AL East matchup as massive -280 home favorites and were bet to -320 at some sportsbooks. The number has come back a bit, settling at -290. The total hit the board at 8.5 and hasn’t seen much action as of Monday afternoon.

Kyle Bradish (1-3, 6.45 ERA): It has been a tough transition to the Big Leagues for the 25-year-old rookie right-hander. Bradish hasn't made it out of the fifth inning in five of his last seven starts and has been taken deep 10 times in his eight starts this season.

Alek Manoah (7-1, 1.81 ERA): Manoah has been one of baseball’s best starters this season. The right-hander has allowed two earned runs or fewer in 10 of his 11 starts while logging at least six innings in 10 of 11 as well.

The Blue Jays are 10-3 in their last 13 games when facing a right-handed starter. Find more MLB betting trends for Orioles vs. Blue Jays

After a slow start to the season, the Blue Jays' offense is showing us just how dangerous it can be after going 13-4 in their last 17 games overall. Over that stretch, the Jays lead MLB in batting average, OPS, and wRC+ and they’ll try to keep that going against the Orioles.

However, these aren't the flightless O’s from years past. This is a scrappy bunch of birds that come into this game winners of two in a row and four of seven. They have also held their own against tough competition, going a respectable 17-23 when playing teams above .500 this season.

However, this might be a wrong place, wrong time scenario for the Orioles.

Baltimore hands the ball to rookie right-hander Kyle Bradish for this one and the transition to the Big Leagues has been a tough one. Bradish is pitching to a 6.06 expected ERA while surrendering a .298 expected batting average to opposing teams.

He also has the highest HR/nine innings among starters with at least 30 innings pitched and now has to go against a Jays team that has hit the second-most homers against right-handers this season. (A sprinkle on Bo Bichette to go yard at +425 isn’t a bad investment).

Then there's the fact the Orioles have to deal with Jays’ starter Alek Manoah. The big right-hander has been one of the best pitchers in baseball this season. He has an expected ERA of 2.79 and is limiting opponents to a .239 expected batting average. And while his strikeouts are down a bit, he is creating a ton of soft contact and pitching deep into games.

That doesn’t bode well for an O’s lineup that ranks 22nd in batting average and 21st in OPS when facing righties. Taking the Jays by a couple of runs seems like the way to go tonight.

When it comes to the total, 8.5 may seem a little low considering how much the Jays have been scoring lately, but that said, the Under feels like the safer bet here.

For starters, Alek Manoah isn’t going to give up much. As noted, he’s given up two earned runs or fewer in 10 of his 11 starts and tends to pitch deep into ball games. Additionally, he has allowed just one earned run on five hits while striking out 16 over his last 13 innings of work versus the O's.

And yes, the Jays are likely to do some damage against Bradish, but if that happens, the O’s can rely on a somewhat surprisingly strong bullpen that ranks seventh in ERA and 15th in WHIP. Bet on this one to sneak below the number.

The Jays' offense might be one of the more underrated gifts to MLB bettors this season, and not because of guys like Vladimir Guerrero Jr., Bo Bichette, and George Springer. It’s because there are countless other guys in the lineup that can get as hot as anyone in baseball.

The Blue Jays outfielder, who has notoriously been a slow starter over the course of his career is starting to heat up. Gurriel is now in the middle of a seven-game hitting streak where he’s hitting .464 with a 1.143 OPS.

With him notching multi-hit games five times over this seven-game streak, getting plus money like this is a great value. 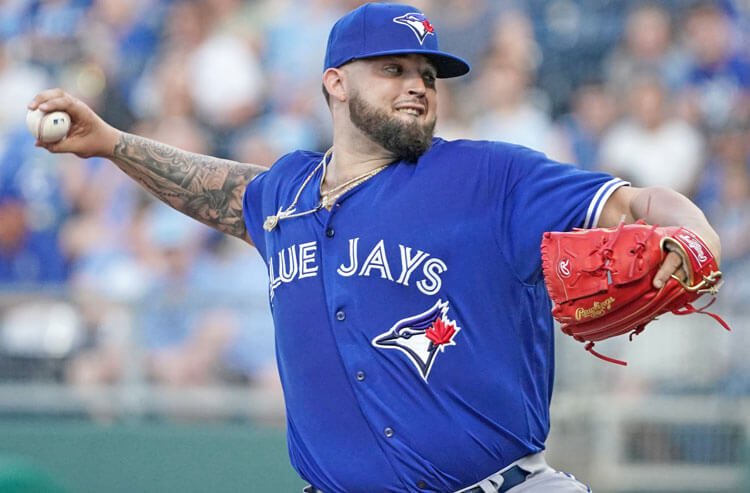