The Houston Astros are heading to Globe Life Field to kick off a series with the Texas Rangers. Behind Jose Altuve's bat and a bit of a bounceback from Cristian Javier on the mound, our MLB betting picks like Houston to take care of business.

The Houston Astros were able to avoid a four-game losing skid when they beat the Miami Marlins on Sunday. Now, the team will look to beat the Texas Rangers at Globe Life Field in Monday’s series opener.

Will Houston earn back-to-back victories in a game in which the team has an edge on the mound? Keep reading our Astros vs. Rangers MLB picks and predictions to find out.

The total in this game opened at 9 and you have to pay a bigger price to take the Under at that number right now. There are, however, some sportsbooks that have it at 8.5.

Meanwhile, the Astros opened at -151 favorites in this game and the best odds you’ll find on them are now -156. There is one sportsbook that has Houston all the way up at -166.

Cristian Javier (3-3, 3.22 ERA): Javier is coming off of a poor start against the Seattle Mariners, as he gave up five runs on six hits in just 3 2-3 innings of work. Javier has now failed to pitch into the fifth inning in each of the last two starts, and Houston will be counting on him to work a little deeper. The good news for the Astros is that he pitched six innings of one-run ball in his last start against this Rangers team.

Taylor Hearn (4-4, 5.40 ERA): Hearn has given up three or fewer earned runs in six of his last seven starts. The problem with the lefty is that he never works very deep in games, and he just has very little upside when he takes the mound. Hearn often has to work himself out of trouble, and this also isn’t the best of matchups for him. He gave up four earned in his 4 2-3 innings against the Astros on May 22, and he also gave up four runs in five innings against them back on April 26.

Astros: Blake Taylor P (Out), Jake Odorizzi P (Out), Jake Meyers OF (Out), Lance McCullers P (Out), Taylor Jones 1B (Out).
Rangers: Josh Smith 2B (Out), Brad Miller OF (Out), Albert Abreu P (Out).
Find our latest MLB injury reports.

The Astros are 27-11 in their last 38 games as favorites. Find more MLB betting trends for Astros vs. Rangers

Astros vs Rangers picks and predictions

The Astros have lost a lot of talent over the last few years, but it hasn’t slowed the team down all that much. Houston is currently 37-23 and sitting 8.5 games ahead of the Rangers in the AL West standings.

Now, the Astros have an advantage on the mound in a meeting with a team that also happens to have an inferior lineup. With that said, how can you not back Houston in this spot?

Javier definitely has some issues with consistency as a starter, but he's only given up three earned runs over 11 innings in two starts against these Rangers batters.

This is exactly the type of matchup he'll be looking forward to after having struggled in his most recent start. He should be confident in his ability to shut this Texas team down whilst going five or six innings deep.

As for the Houston offense, the team has had no issues hitting Hearn this season. The Astros are 2-0 against the Rangers in games Hearn has taken the mound, scoring eight runs in just 9 2-3 innings of work against the lefty.

Simply put, they should have no issues producing against him tonight. Don't let these odds scare you from backing Houston.

The Astros have scored four runs on Hearn in each of their two meetings with him this season, but Houston scored a total of five runs in both of those games.

With that in mind, the Astros aren’t exactly blowing these games open and dooming Under bettors, as both of those contests ultimately did stay Under the total. We like this one to follow suit, as the Astros are probably looking at another five or six in this game.

Javier is fully capable of allowing three or fewer runs against the Rangers, as he has done in each of his two starts against them this season. From there, it’d be up to the bullpen to close it out.

The Under is also 9-2 in Houston’s last 11 games against left-handed starters, and it’s 14-5 in the team’s last 19 games as a road favorite. Meanwhile, the Under is 5-1 in Texas’ last six home games. So, there are some trends pointing towards the Under as well.

Jose Altuve has crushed left-handed pitching throughout the course of his career, as he has a .323 average against southpaws compared to a .300 average against righties.

Of course, Altuve’s numbers against righties are also great, but the fact of the matter is that the second baseman loves to hit lefties. Altuve now faces one that isn’t all that special.

Altuve is 3-for-10 with a double and a homer in his brief head-to-head history with Hearn, and he should turn in another productive night here. He's a career .308 hitter on the road, and it’s easy to imagine him coming through with a big hit or two in this game.

Altuve was 3-for-5 in Sunday’s win over the Marlins, so he should be extra confident tonight. 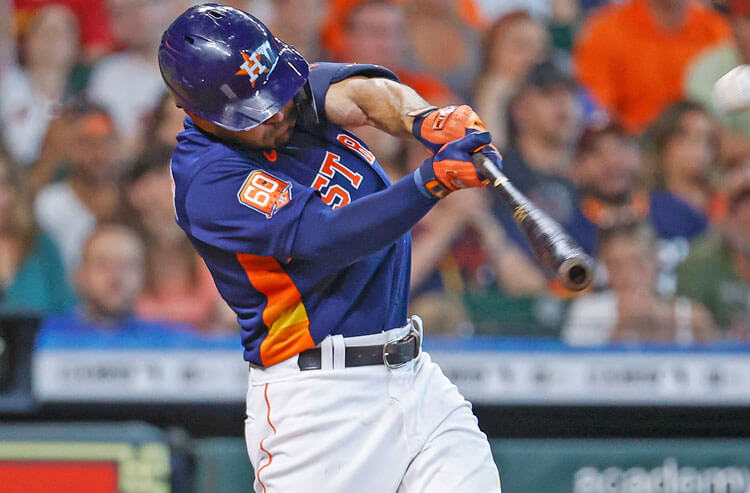