There are a handful of factors playing a role in the handicap of this series opener, but none more important than NL Cy Young frontrunner Sandy Alcantara. As such, our MLB betting picks and predictions lean on him to lead the underdog Marlins to victory.

The Philadelphia Phillies will be looking to get back over the .500 mark when they host the Miami Marlins on Monday.

The Marlins have, however, won five of their last six games, so this won't be a walk in the park for the Phillies at home.

Will Miami win this series opener and send a message to Philadelphia? Keep reading our Marlins vs. Phillies MLB picks and predictions to find out.

The Marlins opened as +138 underdogs in this game, but they’re now down to as low as +110 on one sportsbook. The best odds you’ll get on them at this point is +125.

As for the total, the number opened at 7.5 and is sitting still there right now. The Over is, however, being juiced quite a bit.

Sandy Alcantara (6-2, 1.61 ERA): The Marlins beat the Washington Nationals in extra innings in Alcantara’s last start, and the righty threw nine shutout innings. His team wasn’t able to help him earn the win in the time he was on the mound, but Alcantara has now had two starts this year in which he has shut opponents out over nine innings. The righty has also given up two or fewer earned runs in 11 of his 12 outings this year and is the frontrunner to win NL Cy Young right now.

Aaron Nola (4-4, 3.50 ERA): Nola has had something of an up-and-down season thus far, but he is coming off of his best start of the year. Nola pitched eight shutout innings in a 10-0 win over the Milwaukee Brewers in his last start, and he will be hoping to build on that in this game against a red-hot Marlins team. The only issue for Nola is that he has a 4.41 ERA in six home starts, which is pretty wild when considering he has a 2.70 ERA in six road starts.

The Marlins are 4-1 in their last five games against right-handed starters. Find more MLB betting trends for Marlins vs. Phillies

Marlins vs Phillies picks and predictions

It’s just really hard to suggest laying off the Marlins at plus-money in a game in which they have Alcantara on the mound.

This Miami team is a lot better than people thought it would be, and the group has won five of its last six games. The Marlins are also 4-1 in their last five games against right-handed starters.

They have the third-best batting average in baseball against righties in 2022, and they’re also fifth in both on-base plus slugging and weighted runs created against them this season. As such, the lineup could get to Nola tonight. For what it’s worth, the Marlins scored seven runs on nine hits in 4 2-3 innings in their last meeting with him back in 2021.

As for the Phillies, it’s not hard to envision them having trouble hitting Alcantara in this game. The righty just continues to get better and better at this point in his career, and he pitched 6 1-3 innings of two-run ball against Philadelphia back in April.

That was before he really hit his stride, so don’t be surprised if this performance is even better on Monday. Alcantara is a threat to go eight or nine innings whenever he’s out there, and he’ll look to put the Marlins on his back.

Overall, the Phillies might be a trendy pick to make a run at the NL East this year, but the Marlins are right there with them in the standings. They’re a little underrated at this point, and they’re throwing one of the best pitchers in baseball to the mound.

Alcantara is capable of going out and blanking his opponent whenever he toes the rubber, and as such, he should turn in a good performance against this Phillies team.

He’s currently the frontrunner to win the NL Cy Young Award, so he’ll be dialed in every time he’s out there moving forward. That’s bad news for the Phillies tonight, but the Marlins aren’t exactly in a prime position to light up the scoreboard either.

Nola is a rock-solid pitcher that is capable of holding his own in any matchup when he’s locked in. The Marlins should ultimately get to him, but it might not be enough for this Over not to hit.

The Under also happens to be 6-2 in the last eight home games the Phillies have played against teams with losing records and is Under is 16-5 in games in which Alcantara has pitched as an underdog over the last two seasons. The average total runs scored in those contests is 6.5 runs per game.

The Phillies have the 11th-highest strikeout rate in baseball this season, a mark that should have Alcantara foaming at the mouth.

With that in mind, perhaps he’ll dial things up and miss some more bats in Philadelphia. 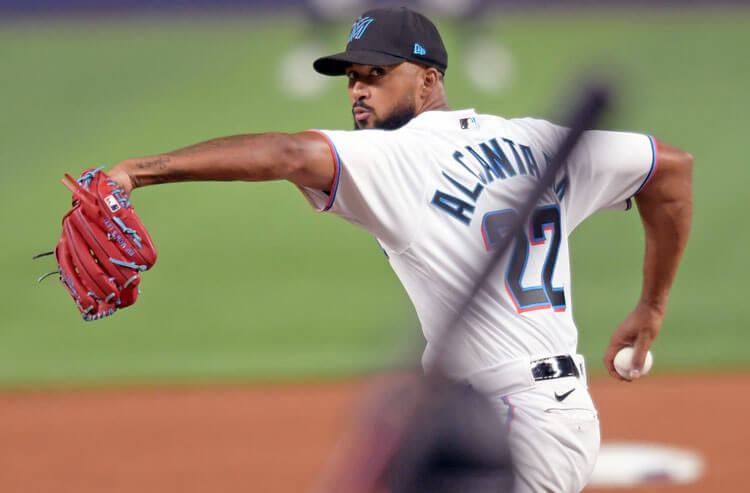