Between an in-form Carlos Carrasco and an undervalued Aaron Ashby with plenty of upside, today's matchup between the Mets and Brewers has all the signs of a scoreless first inning — as we break down in our MLB betting picks below.

We have the second matchup of this three-game series with the NL Central’s Milwaukee Brewers hosting the NL East’s New York Mets. This contest is the fifth meeting between these two clubs this season, with the Mets winning three of the first four matchups.

Will the Mets take care of business once again or can the Brewers pull off a much-needed victory at home? Find out in our free MLB picks and predictions for Mets vs. Brewers.

Mets vs Brewers picks and predictions

Usually, I avoid NRFI wagers at all costs, but this game presents a rare situation where it should be a strong play. Right-hander Carlos Carrasco is taking the mound for New York in this contest and should be an excellent candidate to back in this game.

Through 26 starts this season, Carrasco is 15-6 with a 3.70 ERA and 1.29 WHIP. While he has been strong all season, he enters this game in particularly good form since returning from an oblique injury.

Over Carrasco’s three starts since returning to the rotation, he is 2-1 with a 1.84 ERA and 1.27 WHIP. This strong pitching should continue against Milwaukee, a team that he's fared well against over the past few seasons.

Across Carrasco's four career starts against the Brewers, he is 2-1 with a 3.12 ERA and 1.35 WHIP. Between 78 career plate appearances against the right-hander, this current Milwaukee roster possesses a mere .209 xBA, .328 xSLG, and .295 xwOBA.

Since August 1, Milwaukee ranks just 22nd in the league in BA when facing right-handed pitching. On the other side, left-hander Aaron Ashby is making his first start since returning from a shoulder injury which has sidelined him since August 19.

We are getting some value in the NRFI because Ashby’s surface-level stats are not the strongest this season. However, his metrics suggest that better pitching is ahead as he boasts a .298 xwOBA, .219 xBA, and .356 xSLG.

Part of the reason we are only targeting the NRFI is that Ashby is going to be on a short leash in his return. Most of the consensus among Milwaukee media is that he will only go a couple of innings while the rest of the night will be a bullpen game.

Through 25 career plate appearances against Ashby, this current Mets lineup possesses a lowly .227 xBA, .361 xSLG, and .365 xwOBA. When facing left-handed pitching, New York ranks just 22nd in the league in BA, 18th in SLG, 18th in OPS, and 20th in wOBA.

And while trivial, the Mets clinched a playoff spot last night and celebrated in the locker room with some champagne. Avoid that and the variability of Milwaukee's relief pitchers by backing a scoreless first inning.

My best bet: No Runs First Inning (-135 at DraftKings)

I would lean towards the Mets moneyline in this contest but am not confident enough to pull the trigger. As I mentioned above, a night of celebrating could lead to a letdown spot following a playoff clinch.

Meanwhile, the Brewers will be fighting for their playoff lives in this game. Additionally, Ashby is a strong pitcher and could start the game in a dominant fashion in his return from injury.

New York’s splits when facing left-handed pitching are also a concern in this outing. That being said, Carrasco is still an excellent guy to have on the mound and, with question marks about the Brewers’ plan on the mound, makes the Mets a more attractive play.

However, I am staying away from picking a side.

As you can probably guess by now, I would lean towards taking the Under in this game. Both pitchers are strong and both lineups are inconsistent.

So why not take the Under? I don't trust the Brewers' bullpen at all.

Since August 1, Milwaukee’s relief pitching ranks just 20th in the league in ERA, 24th in SLG, 19th in wOBA, and 24th in FIP. In a game where the Brewers' bullpen is projected to take on the majority of the burden, I will gladly pass on the total.

The only certainty we have from Milwaukee regarding Ashby’s workload is that he will get the first inning, which is why we are going with the NRFI.

Carlos Carrasco (15-6, 3.70 ERA): Making his fourth start since returning from an oblique injury, Carlos Carrasco looks to continue his good form. Over those three starts since rejoining the rotation, he is 2-1 with a 1.84 ERA and 1.27 WHIP. Boasting a five-pitch arsenal, Carrasco typically relies on his 4-seam fastball to set up his slider or changeup. Those two off-speed pitches have been dominating the opposition all season, with each keeping hitters to an xBA south of .215.

Aaron Ashby (2-10, 4.58 ERA): Making his first start since mid-August due to a shoulder injury, Aaron Ashby is projected to be on a very short leash in this contest. That being said, he should still have an impact early on based on his strong metrics this season, including his .298 xwOBA, .219 xBA, and .356 xSLG. Like Carrasco, Ashby utilizes a five-pitch arsenal and relies on a sinker to set up his slider or changeup. Also similar to Carrasco, those two-off speed pitches have kept hitters to a .220 xBA or lower this season. 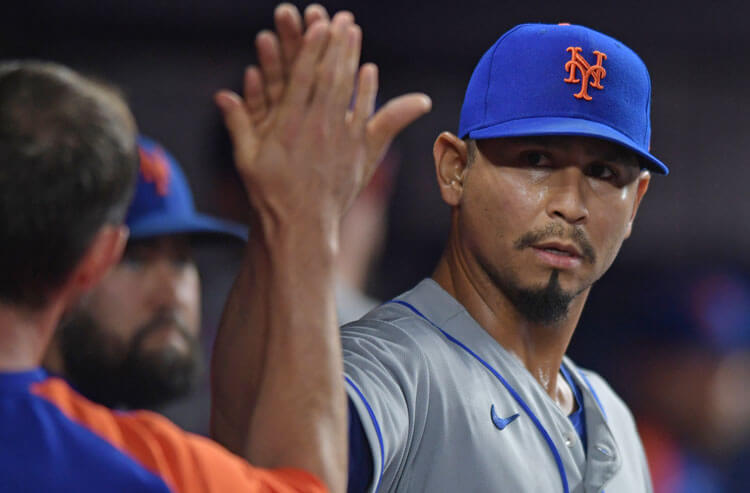 Mets vs Brewers Picks and Predictions: Carrasco, Ashby Dominate Early On
Provided by