Chicago is struggling on the road and now has to face the best pitcher on the planet. Jacob deGrom has a 0.56 ERA and hasn't allowed a run in his last three starts. But is the 6.5 total too low to hit the Under? Find out in our Cubs vs. Mets picks.

The Chicago Cubs' road woes have continued in this series against the New York Mets, having dropped the first two games of this four-game set at Citi Field in Queens. And it won’t get any easier in Game 3 as they now have to face the best pitcher on the planet in Jacob deGrom.

The Mets ace has looked unhittable for most of the season and makes New York a massive favorite in this game. But is the betting value with the Cubs? Check out our MLB free picks and predictions for Cubs vs. Mets on Wednesday, June 16, with first pitch scheduled for 7:10 p.m. ET.

Jacob deGrom (6-2, 0.56 ERA): What more can you say about deGrom other than just... wow. Do you know how hard it is to enter a baseball game in June with a 0.62 ERA and lower it? Well, that's exactly what deGrom did last time out and now there's talk of him challenging Bob Gibson's single-season ERA record of 1.12. Which doesn't seem that crazy at the moment.

The Under is 7-0 in Jacob deGrom's last seven starts at home. Find more MLB betting trends for Cubs vs. Mets.

The Mets have taken the first two games of this series thanks to some outstanding starting pitching and the best is yet to come with deGrom.

He has been so good this season that he's now the +200 betting favorite to win the National League MVP award. The right-hander looks close to unhittable at the moment, limiting opponents to a ridiculously low .121 batting average, and is striking out 14.5 batters per nine innings.

Meanwhile, the Cubs counter with some guy named... (checks notes) Robert Stock. The Cubs will be happy to get a couple of innings out of the right-hander in this one.

Even though the Mets have had their own issues on offense, they should be able to take advantage of a guy who has a career WHIP of 1.54 in 52 career appearances.

There's no value on the Mets moneyline here obviously, but don’t be cute in fading deGrom. Take the Mets on the runline instead.

Want to hear more about how good deGrom is? His 0.56 ERA is the lowest through a pitcher’s first 10 starts in the history of baseball. He’s been so dominant that you can find the Cubs' team total as low as 1.5 at some shops. The Cubs are in first place in the NL Central.

On top of that, a deGrom opponent hasn’t scored more than two runs in a game since April 17 and despite regularly seeing totals of 6.5 or lower, the Under is 7-1-1 in his last nine starts.

Even though we aren't expecting a lot out of Stock, if he can get through a couple of innings relatively unscathed, he then can hand the ball off to a Cubbies bullpen that leads MLB in ERA and opponent average. And that group will get to face a Mets team that ranks 23rd in scoring. 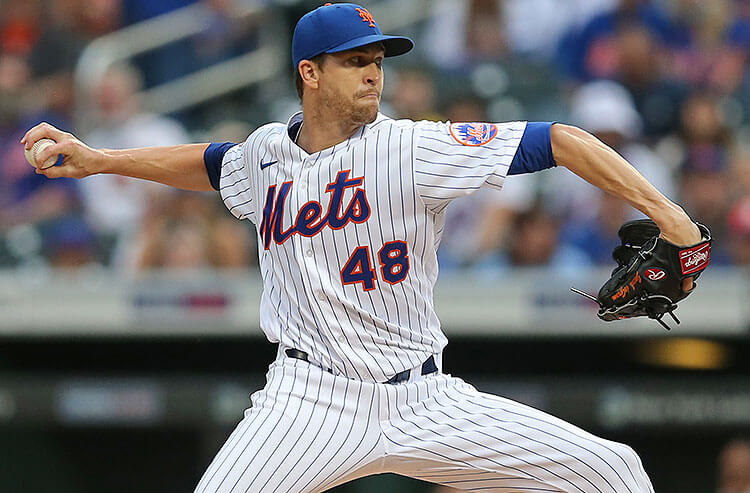 Cubs vs Mets Picks and Predictions: deGrom Domination
Provided by

Indians vs Blue Jays Picks and Predictions: Mejia vs. Matz a Recipe for the Over
Josh Inglis | Aug 4, 2021