Cardinals vs Padres Picks and Predictions: St. Lou Comes Through on SNB

We've got a full slate of 15 games on the MLB betting board with the late game taking place on the West Coast as the St. Louis Cardinals wrap up a three-game series against the San Diego Padres on Sunday Night Baseball.

Despite dealing with a slew of injuries, the Padres have taken the first two games in this set and are installed as slim -130 favorites to complete the sweep.

Here are our best free Cardinals vs. Padres picks and predictions for Sunday, May 16, with the first pitch scheduled for 7:08 p.m. ET.

PointsBet USA posted San Diego a -145 favorite at Saturday afternoon's outset, dipped as low as -125 multiple times and is at -130 as of 4:30 p.m. ET today. Still, the bulk of the action is on the Sunday night favorite. "Sixty-three percent of bets and 78 percent of money on the Padres," PointsBet's Wyatt Yearout said. The total opened at 6.5 and moved to 7 in short order Saturday, then on to 7.5 (Under -120) this afternoon, with 70 percent of bets/67 percent of cash on the Over.

Kwang-Hyun Kim (1-0, 2.74 ERA): The former KBO star has looked good in the big leagues since making his MLB debut with the Cards last season. Kim allowed one run and fanned six batters through 5 1-3 innings in his previous start last Tuesday against the Brewers. The southpaw has pitched to a 2.03 ERA with a 1.11 WHIP across 62 innings over 12 career starts in the big leagues.

Ryan Weathers (2-1, 0.81 ERA): The rookie will serve as the opener and has started in three of his eight games this season. Weathers isn't a workhorse, logging three innings in each of his previous two appearances. However, the 21-year-old has been effective in the time he has been given, pitching to 0.81 ERA with a 0.72 WHIP through 16 1-3 innings.

Cardinals: Paul DeJong SS (Out).
Padres: Fernando Tatis Jr SS (Out), Jurickson Profar OF (Out), Wil Myers OF (Out), Eric Hosmer 1B (Out), Jorge Mateo SS (Out).
Find our latest MLB injury reports.

The Under is 15-5 in the Padres' last 20 home games. Find more MLB betting trends for Cardinals vs. Padres.

The Padres are coming off a huge 13-3 win against the Cards last night despite missing half of their starting lineup, including MVP candidate Fernando Tatis Jr, who was out due to health and safety protocols.

Despite that offensive performance, the Friars still have an OPS of just .663 at home and could struggle at the plate against St. Louis left-hander Kwang-Hyun Kim. Kim has allowed exactly one run in each of his last four starts and San Diego batters have an OPS of just .653 versus southpaws.

The Padres will also have a southpaw starter in young Ryan Weathers. Weathers has flashed plenty of potential this season but St. Louis sluggers have excelled against left-handed pitchers, leading the NL with an .821 OPS.

Despite the Cards' last two losses they are still atop the NL Central with a 23-17 record and have gone 11-5 in their last 16 games. Look for St. Louis to snap out of its recent skid and grab a win against a short-handed San Diego squad tonight.

We mentioned how consistent Kim has been over his last four starts and the 32-year-old has been rock solid ever since coming over to the majors last year.

The Cardinals bullpen was lit up for seven runs last night but they've generally been very effective this season, tying for the MLB lead with an opponent batting average of .195.

Weathers has also been very sharp this season, allowing just nine hits and two runs through 22 1-3 innings pitched. While he has thrown more than 55 pitches on just two occasions this season, the Padres have some excellent arms behind him, with the Padres bullpen leading the majors with a 2.76 ERA.

The Cards have also struggled at the plate lately, batting just .232 and averaging 3.69 runs per game over their last 13 contests. And despite the Padres plating 13 runs last night, they average just 3.62 runs per game at home this season.

Even with the Over cashing in each of the first two games in this series, the Padres are still 15-5 to the Under in their previous 20 games at pitcher-friendly Petco Park. Expect regression to set in tonight and take the Under. 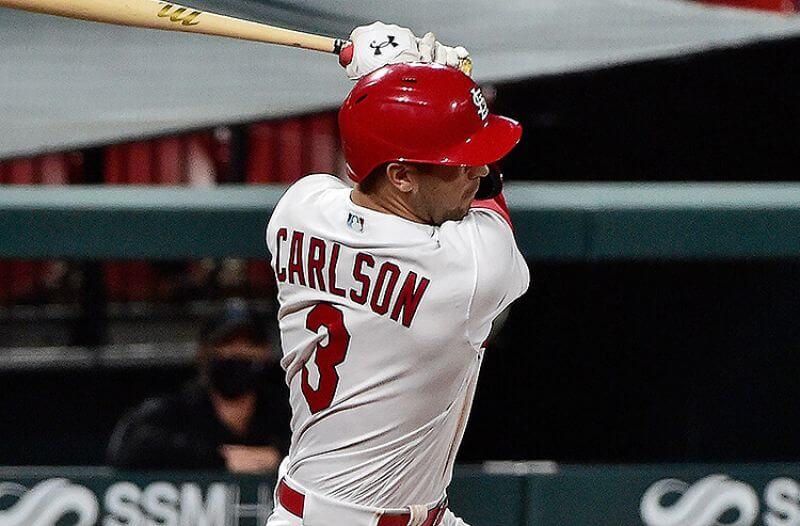 Cardinals vs Padres Picks and Predictions: St. Lou Comes Through on SNB
Provided by

White Sox vs Astros Picks and Predictions: Rodon Will Be Tested Against Houston's Prolific Bats

A's vs Yankees Picks and Predictions: Kaprielian Will Outshine Taillon In Series Opener

Today’s MLB Prop Bets, Picks and Predictions: Lowly Arizona the Perfect Bounce Back for Bauer
About Us
Contact Us
Careers
Our Team
Our Community