Braves vs Brewers Picks and Predictions: Milwaukee is Being Undervalued at Home

The Milwaukee Brewers are playing just .500 baseball over their last ten games, but remain first in the NL Central and are the better team at home tonight against the defending World Series champs. Find out why in our Braves vs. Brewers betting picks.

The Atlanta Braves and Milwaukee Brewers open up a three-game series in Milwaukee on Monday. The defending champs have gotten out of the gates to a predictable slow start. They are 16-19 and just two out of three to the San Diego Padres.

This is about as big as a May series in baseball can get for them. They need to start stringing some wins together in what is a loaded division. The Brewers have gotten rolling as of late. The offense has been hot, and they are now 22-13 on the season sitting 2.5 games above the Cardinals in first in the NL Central.

Who will get the first game of this series?

Find out in our free MLB picks and predictions for Astros vs. Twins Monday, May 16th.

Opening odds for today's matchup were released last night. The Brewers opened up as -130 favorites. Since then, Milwaukee is taken some money. They are now around -135 at most shops, with the Braves returning at around +125. The total opened up at 8.0 and has stayed put at that number.

Ian Anderson (3-1, 4.20 ERA): Anderson is a curious pitcher. Despite finishing fifth in Rookie of the Year voting last season, there were alarming numbers. His FIP was relatively high and didn't reflect the ERA he had. His strikeout rate was low and was particularly unusual because he relied so much on strikeouts in the minor leagues. It does seem like that strikeout rate has been better this season and helped him, but other problems have occurred. His hard-hit rate and exit velocity continue to rise. When teams put balls into play against him, they wallop them. His ERA is a bit high, but it's probably fair given the pitches he's thrown this year.

Freddy Peralta (2-1, 4.40 ERA): He is pretty much the spitting image of Ian Anderson. This is one of the more even pitching matchups that you'll find. Peralta is probably a better strikeout pitcher, but they are much the same when it comes to hard-hit contact. Both are near the bottom of baseball in that category, while Peralta does a slightly better job reducing the exit velocity. It was a bumpy April for Peralta — in 18 innings, he gave up ten earned runs. His WHIP has steadily risen throughout the season as well. He just pieced together his best start of the season against Philly when he went six scoreless innings. But you have to wonder if that's more an outliner than what you should expect.

The Over is 5-0-1 in Braves' last six overall. Find more MLB betting trends for Braves vs. Brewers

Braves vs Brewers picks and predictions

I'm not running to bet on either of these pitchers. Both have similar issues with hard-hit balls and thrive when they can make teams swing and miss. Even if the pitching matchup is a toss-up, the Brewers are the better team.

Atlanta just isn't playing good baseball right now. However, the Braves' strikeout issues are more pressing than in this matchup. They have started the season with the highest whiff rate in baseball at nearly 30%.

In addition to that, they have the fourth-highest chase rate in baseball. Analytics tells us swinging a lot isn't the worst thing. The Braves did that last year, and it worked out ok. Given how they are struggling right now, it may not be ideal for this matchup.

The strength of Peralta is making batters swing and miss. His whiff rate produced and K rate are in the Top 10% of baseball. Those numbers go up when he's playing at home. That's an issue for Atlanta, especially without a big bat like Acuna in the lineup.

I look at my projections, and they are more excited about this matchup than I am. They have the Brewers winning this game nearly 65% of the time, and that means the fair price for this game should be closer to -190.

I think the market love for Atlanta is probably giving you more value on the Braves' opponents than you should get. I'll take the around 7% edge here and grab the Brewers.

This is probably my favorite spot of the two. Before we even talk about pitching, let's mention a few notable trends:

If you had a "system" for when to bet Braves Overs, it would be telling you to bet it in this one. We've spoken a bit about pitching already, but it's worth mentioning again. While I expect Peralta to have his fair share of success, it won't take much for the Braves to cause him some issues.

These pitchers' most prominent issues are hard-hit balls, and guess what? These teams rank in the Top 10 of the MLB in hard-hit rate. It isn't easy to assess whether it comes more from the Braves or Brewers side, but I feel confident in runs today.

Looking at the conditions makes me even more excited about this play. Brisk winds will be blowing out to the center field, meaning that some of those hard-hit balls will fly (and hopefully right out of the park).

In addition to that, temperatures will be warm, so we won't have to worry about reducing ball carry. I'm jumping over here and like it quite a bit. A combination of things makes it hard to see this point staying under 8.

My projections see this one cashing around 60% of the time. Personally, I feel even more confident than that.

Christian Yelich has been quiet as of late after a big start to begin the month, and I believe he's primed for a big night here.

Ian Anderson has struggled with giving up hard-hit balls and hits with high exit velocity. Yelich excels at many things; those are two of them. His average exit velocity is among the Top 10% of baseball. His hard-hit rate? It's the fourth-best of any player in baseball.

We also have historical success against most of the Braves bullpen going for us here too. I love Yelich to have a big day at the plate. I will be backing him in various markets, including hitting a home run.

My favorite bet of the day is backing the former NL MVP to have Over 1.5 bases. This is a feat he accomplished two out of three times when he faced the Braves earlier this season. 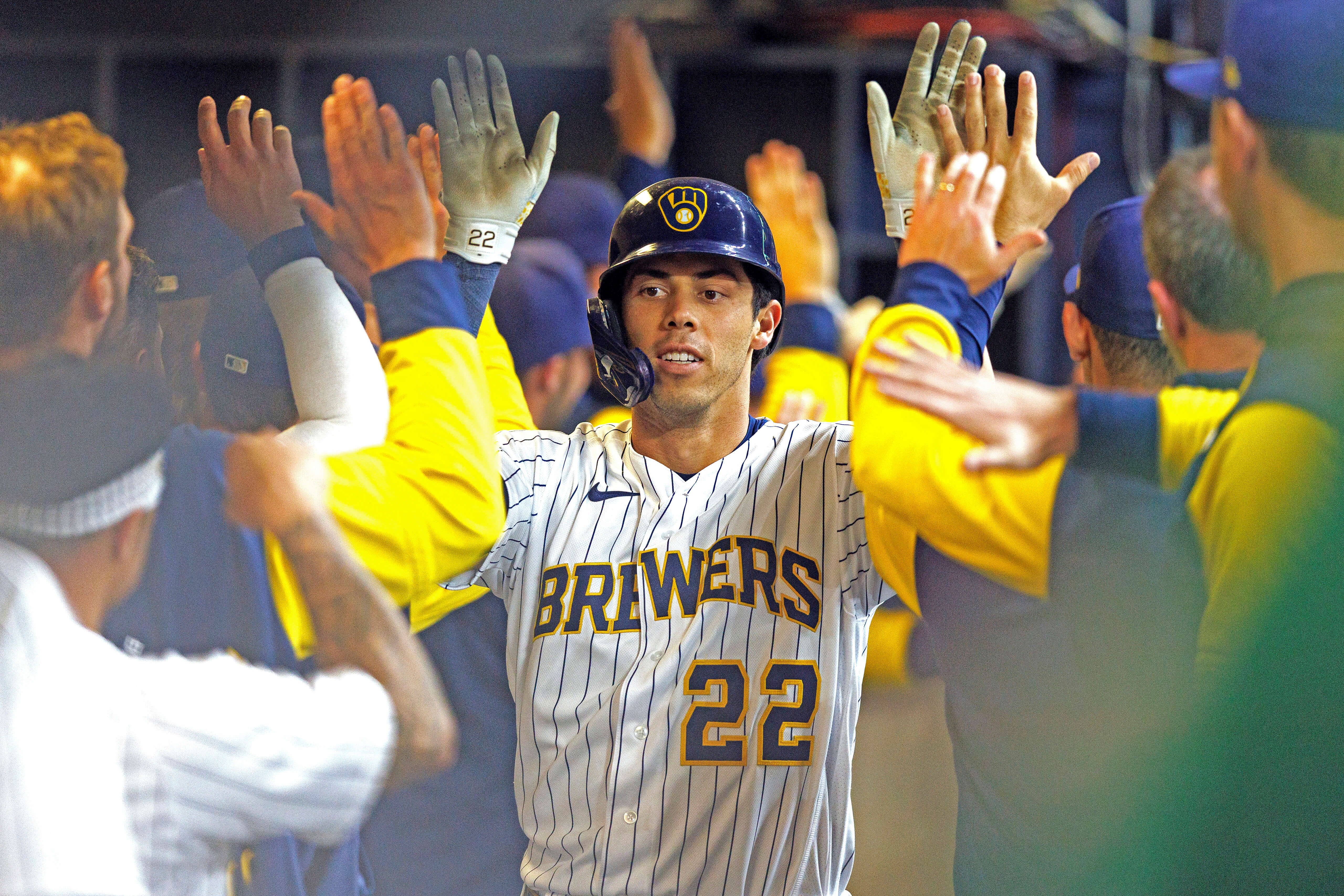 Braves vs Brewers Picks and Predictions: Milwaukee is Being Undervalued at Home
Provided by