Baltimore's resurgence and playoff push got another boost yesterday, with a win over fellow AL East side Toronto. For as good as the Orioles have been as of late, our picks expect the pitching matchup tonight to let the Blue Jays rebound.

The Baltimore Orioles have put the Toronto Blue Jays on notice. After taking Game 1 of the three-game set 7-3, the O’s are just one game back of a wild-card berth and three back of the Jays.

After beating up on Yusei Kikuchi in the opener, things will be a little tougher for Baltimore in Game 2, as the Blue Jays hand the ball to All-Star Alek Manoah.

Can Toronto even the series or is there betting value in an underdog Baltimore team that has won six of its last seven?

Find out in our free MLB betting picks and predictions for Blue Jays vs. Orioles on Tuesday, July 9.

The Blue Jays opened this American League East matchup as about -175 road favorites but early bettors are siding with the streaking Orioles and the line is now down to the -155 range. The total hit the board at 8.5 and is juiced slightly to the Over as of Tuesday afternoon.

Alek Manoah (12-5, 2.45 ERA): Manoah is hoping he won't get hit by a comebacker for the third straight start. Other than that, the big right-hander has been outstanding, recording a quality start in 17 of his 21 appearances.

Kyle Bradish (1-4, 6.55 ERA): Bradish has been solid in his last two outings, allowing three earned runs on eight hits over 10 innings but the Blue Jays will be a much tougher test than the Reds or Rangers.

The Blue Jays are just 7-5 in Alek Manoah’s last 12 starts but have covered the run line in each of those seven wins. Find more MLB betting trends for Blue Jays vs. Orioles

The Orioles (unsurprisingly) jumped all over Yusei Kikuchi in the opener of this three-game set, getting to the southpaw for five runs in the first three innings and eventually holding on for a 7-4 victory. The win was the Orioles’ sixth in their last seven games and they're now 22-10 since the start of July.

While the Orioles have done a fantastic job of piling up the wins, they have played a fair amount of lesser opponents over that stretch. That includes the Rangers, Angels, Cubs, Reds, and Pirates, so this Toronto series is thought to be a good measuring stick. Well, a win against Kikuchi doesn’t feel like it should count, so the real test gets underway tonight against Manoah.

The 24-year-old was a first-time All-Star this year, and deservedly so. The right-hander creates a ton of soft contact by mixing his pitches well, mostly a trio of a four-seamer, a sinker, and a slider. As a result, Manoah owns a 3.24 expected ERA and is limiting opponents to a .214 batting average.

Even though the Orioles' offense has been better of late, they still rank a sub-par 20th in batting average, and 21st in OPS when facing right-handers this season.

The Orioles counter Manoah with a young right-hander of their own in Kyle Bradish. The rookie has put together consecutive solid starts but the overall numbers leave something to be desired. Bradish owns a 5.52 xERA and is surrendering a .279 xBA to opponents.

Tonight, he faces a Jays team that is one of the most dangerous in baseball and ranks first in batting average, third in OPS, and fourth in wRC+ when going against right-handed hurlers this season.

The difference in starters here is big and is enough to feel confident in backing Manoah and the Blue Jays to bounce back and take this one by a couple of runs.

When it comes to the total, 8.5 seems pretty close to spot on for this matchup. If we have to lean one way, it’s going to be toward the Under.

Manoah will be a tough matchup for the Orioles, and in his last three starts against them dating back to last season, he has allowed just one earned run on six hits while striking out 23 over 19 innings of work. So, he is more than capable of shutting down this lineup.

Even though the Jays, in theory, should hammer Bradish, he has been a little better of late and they are averaging a more mediocre 4.14 runs per game over seven contests in August. More importantly, if Bradish gets in trouble, the O’s can turn to a bullpen that ranks third in ERA and eighth in WHIP.

Bet on this one to sneak below the number.

The best value tonight is on the Blue Jays' run line.

Not only is Manoah great, but he is also the ultimate competitor. He won’t like the fact his team dropped the opener of this series and will want to lead his team to victory. Over 5.5 on his strikeout prop is also worth a look, as he’s gone over it in four career starts against the O’s and five times in his last eight games.

He’ll use that moxie to lead the Jays to a big win tonight while the offense should give him enough support to cover the -1.5. 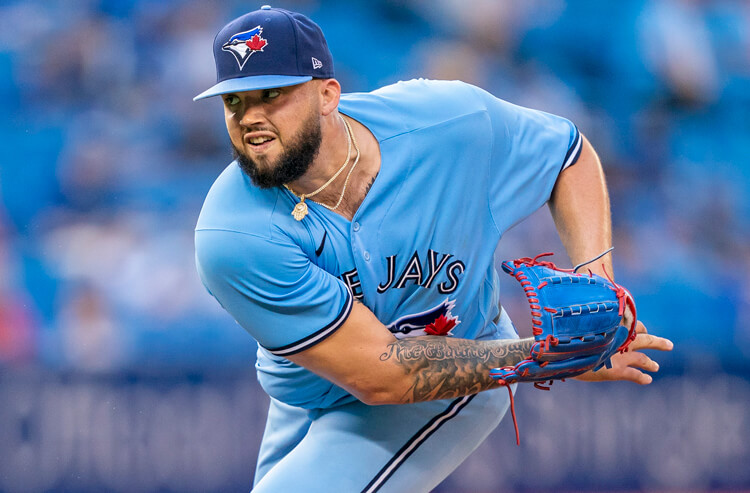