Backing Toronto with the wildly inconsistent Yusei Kikuchi on the mound may be a tough pill to swallow, but our MLB betting picks break down why there's still value in taking the Blue Jays to win this series-opener against this feisty Orioles club.

The Toronto Blue Jays play nearly 30% of their remaining games against the Baltimore Orioles. In years past, that would constitute a gift from the baseball gods, but not this year’s edition of the O’s.

Baltimore enters this AL East matchup just two games out of the final Wild Card spot and four games behind Toronto for the top spot. And while the O’s will be underdogs tonight, they’ll have more than a fighting chance as the Jays hand the ball to the crap shoot that is Yusei Kikuchi.

Find out how it plays out in our MLB betting picks and predictions for Blue Jays vs. Orioles on Monday, August 8.

The Blue Jays opened this AL East matchup as -150 road favorites but bettors' doubts in Kikuchi have moved the line to -130. The total hit the board at 9 and has been bet up to 9.5 as of Monday afternoon.

Yusei Kikuchi (4-5, 4.86 ERA): Kikuchi has been OK since returning to the Jays rotation after a brief IL stint, allowing three earned runs on five hits while striking out 10 in nine innings over two starts. But overall, the lefty has been consistently hit hard more than most starters.

Jordan Lyles (8-8, 4.40 ERA): After a tough start to the season, Lyles has been surprisingly solid since the start of July. The right-hander is pitching to a 3.23 ERA while recording four quality starts over his last seven appearances.

The Blue Jays are 12-4 in their last 16 games when facing a right-handed starter. Find more MLB betting trends for Blue Jays vs. Orioles

The Blue Jays earned a weekend split with the Twins and are a ho-hum 3-3 over the first six games of their nine-game road trip heading into this three-game set at Baltimore.

The Jays are now 14-6 since John Schneider took over for Charlie Montoyo and it has been in large part thanks to an offense that has arguably been the best in baseball for more than two months.

Toronto ranks first in batting average and second in OPS and wRC+ since the start of June and will now dig in against Jordan Lyles. And while the right-hander’s numbers on the surface look solid, the advanced numbers say he's due for a bit of a regression.

Lyles has an expected ERA of 5.04 and is surrendering a .269 batting average to opponents, both marks that are well below league average. Additionally, Lyles has made one start against the Jays this season where he allowed four runs on five hits over 5 1-3 innings of work.

The reason that gives you pause when it comes to backing the Blue Jays in this one is, of course, Yusei Kikuchi. Every start that sees the southpaw take the mound has been an adventure this season.

While Kikuchi has pitched a little better since coming off the injured list, the overall numbers still leave plenty to be desired. Kikuchi ranks in the Bottom 1% in average exit velocity, hard hit percentage, and barrel rate, resulting in an expected ERA of 5.82. Long story short, he gets hit hard and often.

That said, even with Baltimore surging up the standings, they still rank a sub-par 23rd in batting average and 24th in OPS when they face left-handed pitchers this season.

It can be hard to put faith in Kikuchi as a favorite but bettors have actually driven this line to the point where there is some value with the Jays here. The Jays’ edge on offense and Lyles being due for a little regression makes the price with Toronto here more than reasonable.

While the Orioles' offense has been inconsistent against southpaws, they have much better in the second half, where they rank 13th in batting average and OPS since coming out of the All-Star break while also plating 4.25 runs per game. They also got to Kikuchi for four runs on five hits over four innings in a game back on June 14.

Meanwhile, the Jays are averaging a ridiculous 6.13 runs per game in the second half. There is enough firepower and poor pitching for this game to get Over this number.

Fading Kikuchi has been a profitable pursuit this season and today the best way to do that is by taking Anthony Santander to go Over his total bases.

The Orioles slugger is hitting .255 with a .786 OPS and 19 home runs and has been on fire since the All-Star break. Santander owns an impressive .339 average and a .982 OPS, including nine extra-base hits over 15 games so far in the second half.

Santander has just three career at-bats against Kikuchi but has managed a hit and it doesn’t hurt that his numbers bump up to .288 and .879 when facing southpaws this season. 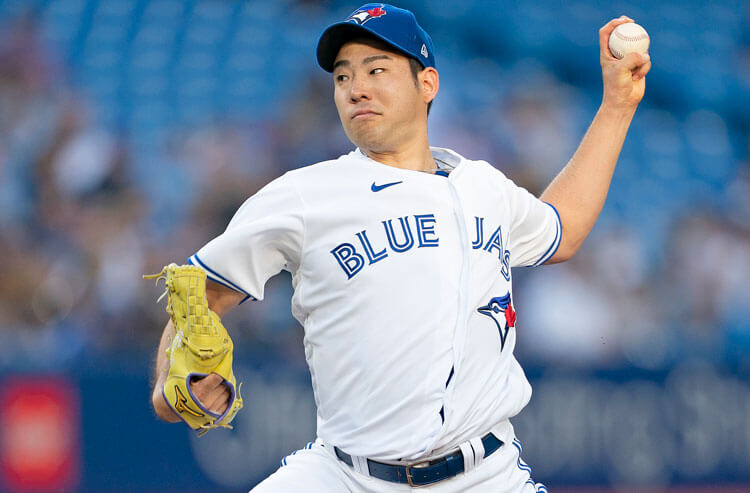