Astros vs Yankees Picks and Predictions: Cole Keeps His Former Squad in Check

Gerrit Cole has been — one anomaly aside — in fine form of late, and has brought his A-game against his former squad. See why we're backing the Yankees to prevail in pitcher's duel vs. the Astros with Saturday's MLB betting picks.

The Houston Astros got a gem from Justin Verlander, who pitched seven innings, allowing one run on four hits in a 3-1 victory. It was the first loss for the Yankees at home in 16 games.

Each team now has won a game in this series. The Yankees send their ace, Gerrit Cole, to the mound for Game 3, while the Astros are countering with Cristian Javier — the Under could hit for the second consecutive game.

Can New York bounce back from defeat, or will Houston keep the momentum on its side? Find out with our free MLB betting picks and predictions for Astros vs. Yankees on June 25.

Cristian Javier (4-3, 3.07 ERA): Javier has had two strong games in June after the month began with a shelling at the hands of the Seattle Mariners. In that contest on June 6, Javier managed just 3.2 innings, allowing five runs on six hits. He has been more stable in his last two outings.

On June 13 against the Texas Rangers, the 25-year-old right-hander went six innings allowing two runs on five hits. His last start, which was against the Chicago White Sox, he went five innings, allowing one run on two hits.

Gerrit Cole (6-1, 3.14 ERA): The ace of the Yankees’ starting rotation, Cole has been money his last two games. In his last start against the Tampa Bay Rays, the 31-year-old righty carried a no-hitter into the eighth inning but had to settle for a one-run, one-hit performance.

The start before that, he again faced Tampa Bay and limited it to five hits while not allowing a run. Cole is facing his former team for the third time —in the previous two he allowed a total of two runs and eight hits.

The Yankees are 6-1 in their last seven against a team with a winning percentage above .600. Find more MLB betting trends for Astros vs. Yankees

Now, however, the tables are turned as it is Houston who must try and defeat the Yankees’ ace, Gerrit Cole. Cole is facing his former team for the third time. In the previous two meetings, both last year, he stymied the Astros, throwing a complete game, three-hit shutout, and the other a seven-inning gem, where he allowed two runs on five hits.

Cole’s past starts in June would point to another strong outing on Saturday. The righty has had four appearances this month and three of them have been outstanding. His last two were against the Tampa Bay Rays and he had a no-hitter going into the eighth before it was broken up. He had to settle for one run on one hit.

The other start was against Tampa, and he didn’t allow a run on five hits.

Then there’s Minnesota: Cole got uncharacteristically shelled, giving up seven runs on eight hits, and couldn’t get out of the third inning. He gave up five home runs to the Twins — that’s one less than he has given up in all of his previous starts this year combined.

The outing before that, he kicked off June by blanking the Detroit Tigers for seven innings, giving up two hits, and striking out nine. We should see that Cole on Saturday afternoon.

We know what Cole should do, but what about Houston’s Cristian Javier? Can we trust him to keep this game on the Under?

I think so. Javier has pitched well in his last seven starts, though he has regressed a bit from earlier in the season. Still, he has an ERA of 3.07, and other than two poor outings, has been dependable.

One advantage Javier has is that he doesn’t give up many home runs, only allowing four all season.

That’s good because the Yankees live off the long ball. They have a league-leading 117 homers. Six of their seven runs in the first game came off two three-run homers. Their only run in Friday’s contest was a solo homer by Giancarlo Stanton.

This should be a classic pitcher’s duel with runs at a premium. Look for the Under of 8.5 to hit rather easily.

Gerrit Cole has been a master on the mound, and I expect that to continue on Saturday afternoon in the Bronx. He seems motivated to pitch well against his former team, as evidenced by his two strong performances against them last year. In those two games, he allowed three and five hits.

Saturday’s total line for Cole is 4.5 hits. In his 14 starts this season, Cole has had four or fewer hits allowed in half of them.

The Astros are not as good at collecting hits as a first-place team should be. They are 22nd out of 30 teams in that category with 547, averaging just under eight hits a game, but in Friday’s win, they had just five.

Cole is too hot right now for the Astros, who have stumbled against him in the past. Don’t forget: In his last outing, Cole took a no-hitter to the eighth inning. He ended up just giving up the one hit. 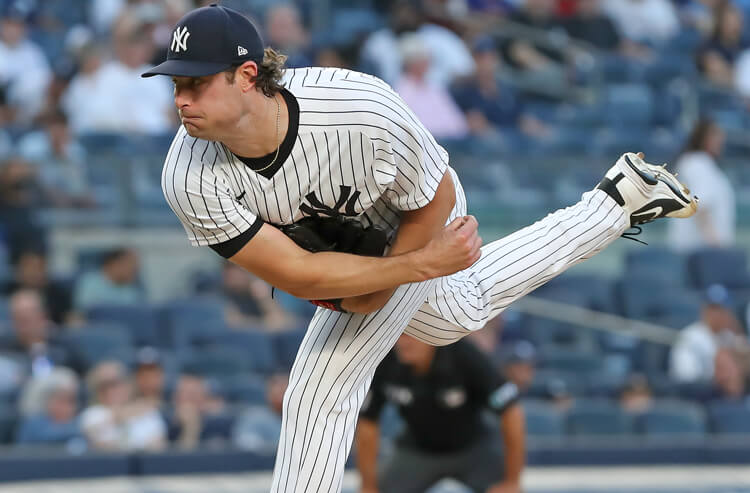 Astros vs Yankees Picks and Predictions: Cole Keeps His Former Squad in Check
Provided by